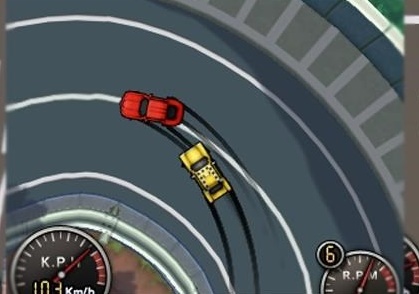 When I think of Natsume, pocket racing games do not immediately spring to mind. Not when it’s got the Harvest Moon franchise going strong. That being said, Gotcha Racing does a fine job of creating a simple racing title that performs well on the tracks, but also provides an interesting hook to keep you coming back for more.

In truth, Gotcha Racing is probably best described as a filler title, because it is quick and easy to play – making it about perfect for the 3DS since you can play it on the go in short bursts. The top-down view is quite simple to look at, but not displeasing. It does look somewhat dated, like older NES/SNES games. It relies heavily on bright colours to help the cars stand out from one another and the environment, which is mostly grey streets, white lines and splashes of bright colours from trees or curbs. You have some basic gauges on the screen and points of data to help you discern how the race is going, but none of it is terribly flashy. For those wondering how the 3D works, well – wonder no more. There isn’t any, though that presentational disappointment is balanced out by the music, which is nicely peppy and occasionally catchy.

One thing I did like about the graphics was how both screens are used during the racing. The action occupies the lower screen, driving upwards towards what you see on the top screen. I think this was a particularly clever design choice, because a single screen would have given you almost no time to ‘plan ahead’ for what was coming. This gives you enough time to respond accordingly without the game feeling cheap and unfair while maintaining a sense of speed and progress. 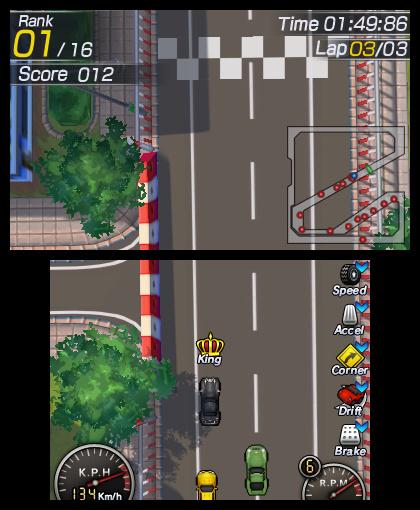 As for the racing style itself, it is of the drifting variety. The controls are basic, with acceleration and braking as you power slide into corners, straightening out and bursting ahead. It is fast, fluid and fairly entertaining, though there really is not much more to the racing itself or the tracks beyond what I have covered. The top-down view works well here, as it gives you a good opportunity to see how your drifting is working out compared to the road. In a review or inside view found in more AAA racing titles, the drifting can sometimes ‘get away from you’ because you cannot see the road as fully as you can here. In terms of how much content is here, you can easily drop a couple of hours working through the twelve different tracks, which are thankfully quite different from one another.

Where Gotcha Racing is most interesting is actually off of the track. While I do not necessarily consider that a good thing in and of itself (after all, it is a racing game – shouldn’t that be the best part?), the mechanic for upgrading your car is actually pretty enjoyable and something you get to experience right out of the gates. It’s based on the popular gatcha hobby in Japan – you know the one where you drop coins in to get a little capsule with a randomised toy inside? That’s a bit like how it works here. The game’s car-building mechanic is structured around racing well to collect randomised bits to upgrade your toy-like car. These pieces upgrade three different parts of the machines: body, engine and tires. This gives the game a significant amount of replay value, because some tracks demand different builds than others.

As someone who is frequently hooked on progression mechanics and improving what I have, this little game was actually pretty addicting. Winning races can give you a chance to go back to these machines and try to get something new, or even just pick up accessories that can give your ride a nice boost. Mixing and matching parts while hunting for rare pieces actually had me wanting to complete races more than wanting to compete in the races themselves. 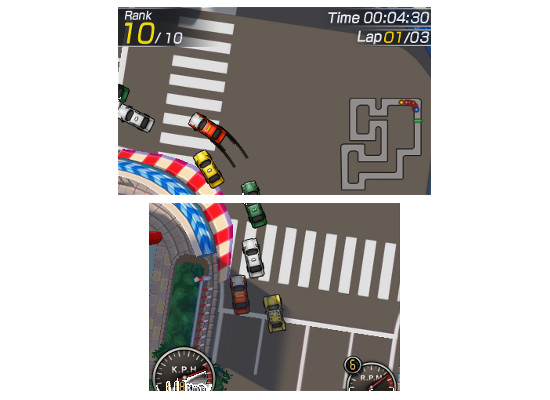 Gotcha Racing benefits from an addicting mechanic that elevates what would otherwise be a decidedly average top-down racing game for the 3DS. Racing in short bursts to acquire more visits to the machine is the primary hook here, and it works well enough but I do wish there was a bit more mileage to get out of the racing component itself.

Life Is Strange: Episode 5 has a tentative release date