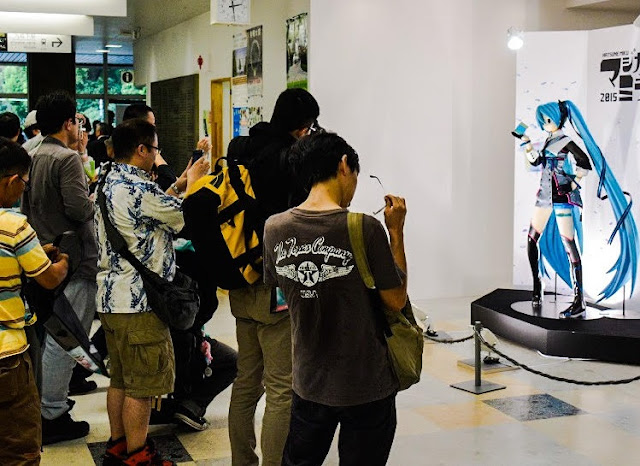 For all the crazy stuff that I’ve been getting up to while in Japan (and will continue to get up to, what with Disneyland and Tokyo Game Show ahead), I have to admit that the Miku Expo and concert was the thing I was most looking forward to. With the chances of any organised Hatsune Miku event coming to Australia in the near future slim at best, this was the best opportunity to see how these events work.
Besides, with Miku’s homeland being Japan I wanted to see how her people responded to her. And boy did they respond. I’ve never quite seen anything like what went on at Hatsune Miku Magical Mirai 2015, and I came away with an even stronger belief that as the technology behind Hatsune Miku improves further, and the voice continues to naturalise, that Miku will be as important to music as Elvis himself.
The thing that immediately struck me about the expo was just how involved the community was. Having been to events like SMASH!, EB Expo, and even Tokyo Game Show, I was expecting some people to come in cosplay and the like, but even those that weren’t in cosplay had Miku t-shirts on. Every bag was covered in Miku badges, stickers and toys. People were bringing in suitcases to put all the stuff they were buying into for safe keeping through the day… and those suit cases had a Miku design plastered all over them. A life-size model of Miku stood at the front of the exhibition hall, and as you can see from the image above, the scene of people taking photos was not actually any different to what happens when celebrity walks the red carpet. 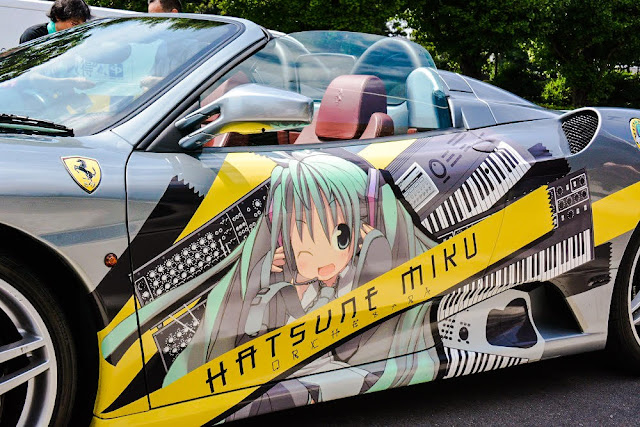 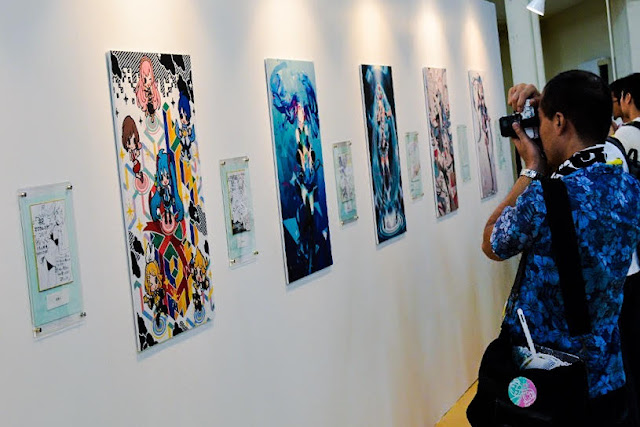 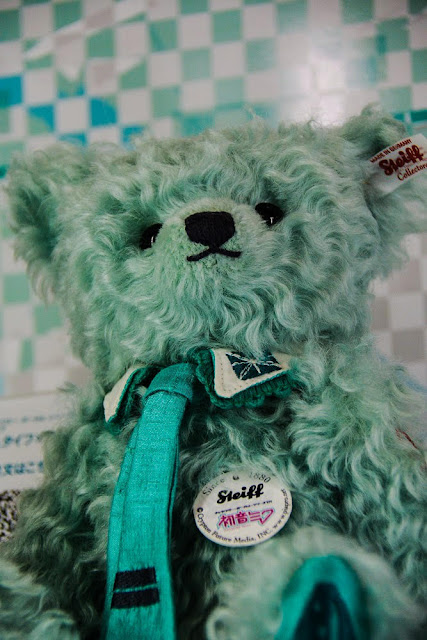 Of course this was an expo dedicated entirely to Miku, so the people that showed up were her biggest fans, but the huge lineups for everything within the convention, and the general difficulty I had in moving around at times shows just how popular she has become in her homeland. There was literally no difference in the size or behaviour of the crowd here than if AKB48 or some other Japanese pop band decided to throw an expo.
Where Miku is different is where her celebrity comes from, and this clearly helped shape the content of the expo. Miku is popular because her fans make everything about her. Aside from the official, original image of a girl with green hair provided by KEI, and the music software itself as created by Yamaha and Crypton, there are legions of artists reimaging Miku. They design her costumes, create her music, her dance routines, and, effectively, her personality. It’s a far more democratic approach to building up a celebrity than we’ve seen before, and that theme continued through into the expo. There was a room dedicated to the best of Miku’s fan art, for example. I was accosted by the team from Piapro – the Crypton subsidiary that manages Miku licenses and fan engagement – who were producing the official 2016 Miku calendar, and asked to vote on my favourite images that would appear in the calendar. Over in another booth Yamaha was showing off a Miku-themed mixer, and the audience were invited to sit down on a live web show and play around with it.
Everywhere throughout the expo that I looked there were people not only consuming the Hatsune Miku goods, but were being an actual part of the creation of Miku. You were also able to purchase tickets to attend lectures on producing music and drawing Hatsune Miku. I didn’t attend these myself, as I figured that imperfect Japanese would mean I wouldn’t understand properly what was going on, but again it goes to show that the culture that has developed around Miku is not just one of following a star and buying his/ her CDs or attending his/ her concerts, but rather actively creating content around “their” celebrity. 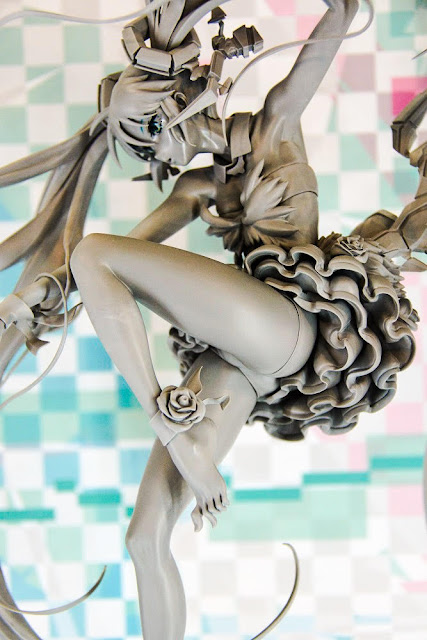 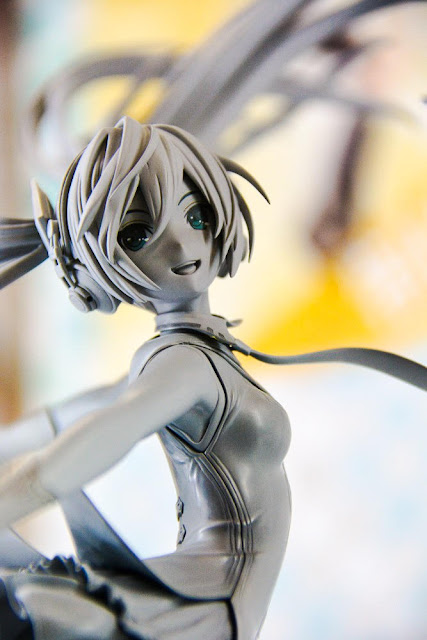 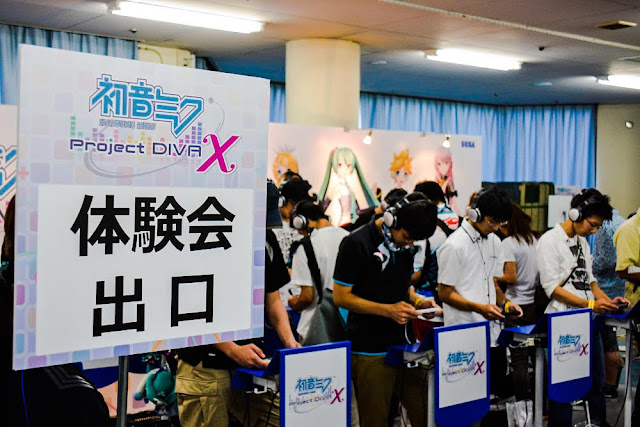 In addition to the shops and lectures, Miku’s video games had a significant presence, because they are also so core to driving her popularity. The most popular of these game booths was, of course, the world’s first demo of Project Diva X, the first Miku game to land on PlayStation 4 and due for release next year. Unfortunately the demo was only a single track, and the PlayStation Vita version of it, but it was enough to give me a sense of the game:
With the exception of the addition of a “burst” icon, which requires players to rapidly mash a button for a couple of beats, Project Diva X plays exactly the same as the Project Diva F and F2 titles. However, there’s a whole lot of new stuff that happens outside of the rhythm side of things that I wasn’t able to test, such as a light levelling RPG-like system, and a bit of grinding in earning “voltage orbs” by performing well. Also, the game has a significant visual update, and Miku looks better than ever on the Vita screen. I can’t wait to see her on PS4. I seriously cannot wait to see her on my PlayStation 4.
There was also the Project Morpheus demo from E3, which allows players to interact with Miku in virtual reality. This booth was so popular that the organisers were actually running a lottery to decide who got to play it. This was something I had never seen in a convention before, but basically people would pick from two cards in a lottery app that the organisers were carrying on their iPad, and if they picked right, they would get a ticket to the Project Morpheus demo. I was exceedingly lucky to get a ticket, given that they were turning away 20-30 people for each one who was getting a ticket, but unfortunately the ticket I won would only let me play the demo after 5PM, and by then my media pass had expired and I needed to leave the expo. You have no idea how crushed I was that I missed a golden ticket opportunity to experience Miku in virtual reality. 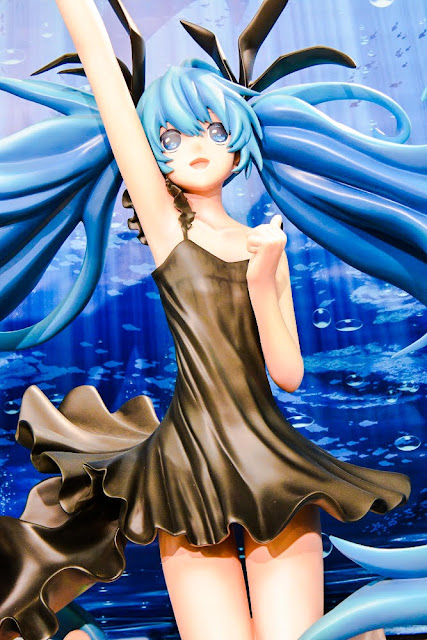 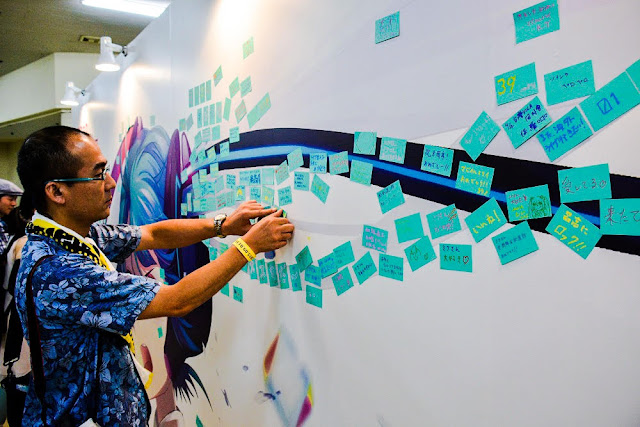 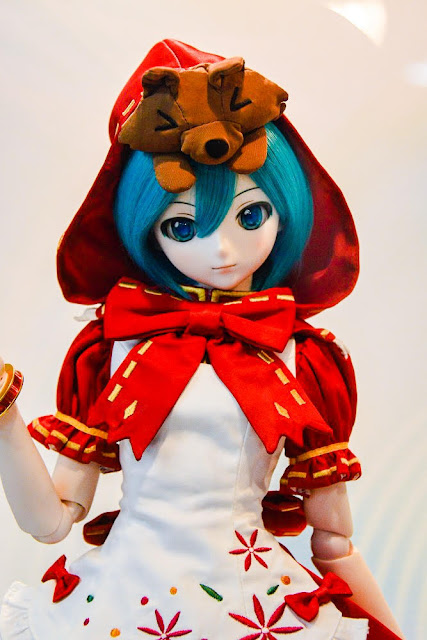 Hopefully at TGS I get a second chance.
The expo was very much the commercial side of the Magical Mirai show, being 99 per shopping, with the actual concert being the real ticket event (something I’ll discuss in full tomorrow). But even so, it was genuinely exciting to finally see and confirm for myself just how popular Hatsune Miku has become in the country where she matters the most. With her popularity only set to soar further now that she’s making inroads into western markets, I’ll say it again: what Miku represents, as a democratisation of music production and a celebrity available to the most amateur of aspiring music producers, is the most important thing to happen in music for a very long time. Even if the mainstream aren’t quite ready to accept that. Give her a few years, and Miku will be everywhere.
– Matt S.
Editor-in-Chief
Find me on Twitter: @digitallydownld