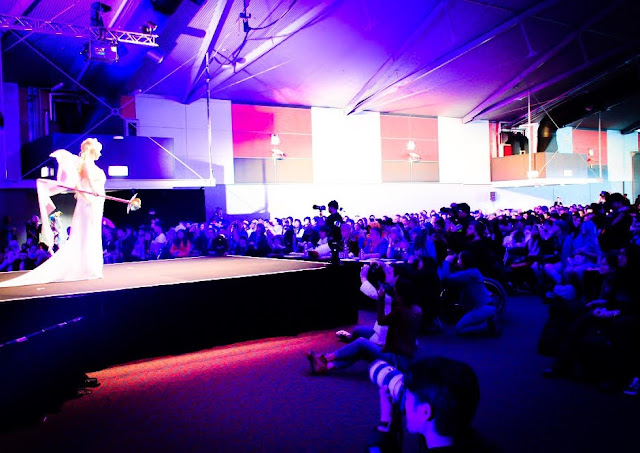 While there were a lot of people dressed up as their favourite characters at SMASH! this year, special mention needs to go to those that actually performed for what turned out to be a massive audience.

Cosplay on stage came in two forms at the event. People either took to a catwalk to show off their awesome consume design and construction work (or bare chests, as you’ll see below). That one was just for fun. Alternatively there was an actual competition, with many of the cosplayers also performing small skits in character to help win over judges.

I’ve been going to cosplay events for quite a few years now, and I must say it’s amazing how quickly this little hobby is developing as a competitive activity. The costumes are becoming ever more elaborate, detailed, and realistic with each new event. The skits more elaborate. Even the hosts are improving in the showbiz side of things.

And, importantly, the crowds are responding. As a media dude with a camera I had to scramble around like a crazy guy at the front of the stage to get shots among the other photographers. At one stage I turned around and saw that the entire hall of seats were occupied. Cosplay has become a real drawcard and major event.

The photos in this gallery were snapped on a Nikon DSLR D7100, provided to DDNet by Nikon.
Share this

Hands on with Dragon Quest Heroes: The World Tree’s Woe and the Blight Below