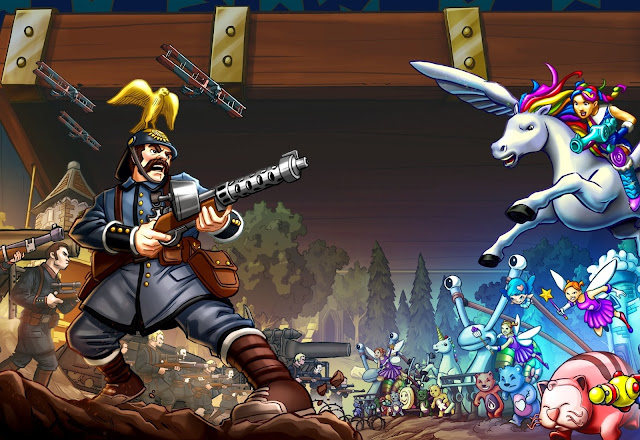 Toy Soldiers: War Chest overcomes a handful of smaller annoyances such as in-game purchases and some painfully irritating sound work, and manages to deliver an engaging mix of strategy and action that is wrapped up an in imaginative, nostalgic package.

G.I. Joe. He-Man. I saw these in the recent trailer and could not help but smile. Toss in some Transformers, Thundercats, Voltron or Jayce and the Wheeled Warriors and we would have most of my childhood on the screen. The graphics are bright, colourful and really just a whole lot of fun to take in. Some of the sound effects could use some variety – especially the turrets which you will often need to man, but make the same regular exploding sound over, and over, and over (and over) again. So Ubisoft has got the most important thing right from the outset – this game got the presentation right enough that it will appeal to the nostalgic.

There have been been plenty of movies (Toy Story) and games (Table Top Racing) that try to build an experience around the world of toys in a larger-than-life experience. The range of battlegrounds and how they are brought to life is nothing short of brilliant. Lunch boxes, books, tabletops, 20-sided dice and more populate the battlefield and really bring to life the kinds of environments kids play with their toys while letting their imaginations take over. Even the loading screens borrow from this sense of nostalgia as messages pop up about removing sand from the joints of toys or digging vehicles out of the sandbox. While I did enjoy the humorous spirit of these loading screens, I do have to note that those loading times can be ridiculously long. 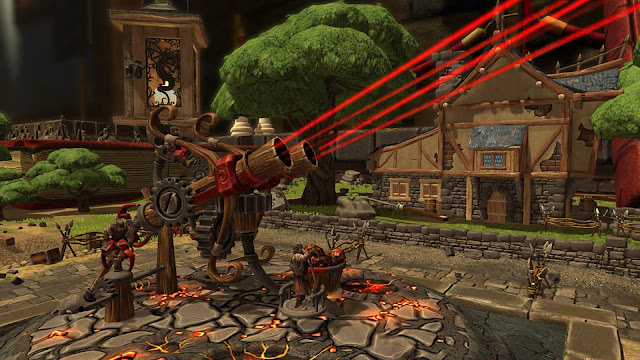 The gameplay is an interesting mix of tower defence and action. There are specific locations on the map where the turret of your choice can be positioned. This is somewhat less strategic than games like Defense Grid that give you a lot of room to place your towers anywhere you like. But then it replaces the softer strategy elements with some action to enjoy instead. What separates Toy Soldiers: War Chest from a true tower defence title like Defense Grid is that you can take control of a singular turret at any time, and it’s highly recommended that you do so.

The unmanned turrets are nowhere near as effective as I am when using one. They will still help to mow down the impending enemies, but their range is far less useful and they quite often fail to properly prioritise which targets to aim for. This manual control is also encouraged by a mechanic that builds up a momentum bar. Get it high enough, and you can call out special strikes from your hero character. These hero characters are quite powerful, but they have limited lifespans. They are run by a “battery life” mechanic that tends to run down quickly, but to compensate a little there are batteries scattered around the field give you a chance at keeping your hero toy on the field of battle just a bit longer. These two elements represent the action side of the game.

The hero you choose also impacts not only your character that runs around the field when called upon, but your towers and units as well. For example, the heavy artillery unit for General Kaiser is a cannon that arcs powerful singular cannon balls up into the air, while He-Man uses a dragon-shaped cannon that launches a series of less powerful but more accurate energy bursts. Each hero has their own unlockable items that can be purchased and earned as he or she gains levels, adding a nice sense of progression to the game. These unlockable items allow you to gain access to new weapons but also allows you to upgrade your existing ones. Each turret has values for range, damage and defence, and your coins earned in battle allow you to purchase new turrets and also to upgrade existing ones. 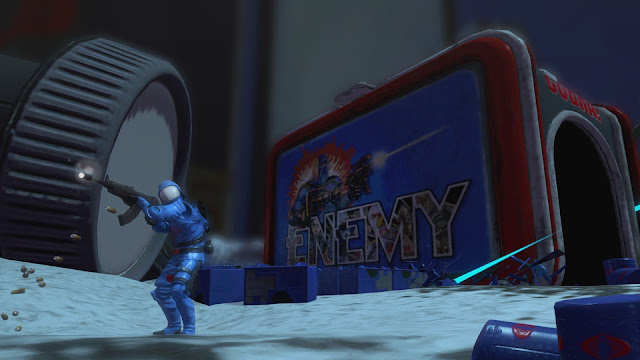 Most of the characters can be unlocked through typical gameplay. The first half of the campaign unlocks a new hero character. These are generic or off-brand representations of the types of toys we might use as kids, such as a military general, a colourful female warrior princess or an evil dark lord. If you want one of the licensed properties such as He-Man, G.I. Joe or Assassin’s Creed, you have to purchase them separately online or pick up the enhanced version of the game. There are also packs of cards that can be opened to provide booster items and the like. These are purchased using coins (1,000 to purchase a standard pack or 2,000 for the deluxe pack), which can be earned in-game, but you can purchase more coins as well. If you pull a duplicate item from the pack, it turns into a few coins to compensate for the fact that duplicate items are worthless. This is okay when you are just earning the coins and packs through gameplay, but I have to think I would be disappointed to spend real world money on a pack of items, only to get a bunch of duplicates that equal fewer coins than what I just paid for.

While it is clear that Ubisoft wants you to spend some money on microtransactions, it is not quite as in-your-face as some other games are. There is a store window in the upper right corner of the main menu screen, but having played some games recently like Magic Duels that seems to have a button that takes you directly to the store in almost every menu screen, at least here Toy Soldiers: War Chest feels less invasive about it than some other titles are.

Even if Toy Soldiers: War Chest only had a campaign mode, I would say it is a good deal of fun, but the multiplayer options are substantial as well. You can play competitively against people online or locally, and you can even work cooperatively with a local friend to beat levels of the game. Once again the shop transactions rears its awkward head a little, as usually when you download a game’s DLC to a console, everyone has access to it regardless of account. Not so here, as my son and I were both playing the game on our accounts, but he ended up disappointed, as he wanted to use the Assassin’s Creed set, which I didn’t have access to. Again, it’s a bit too much like a money grab for my tastes. 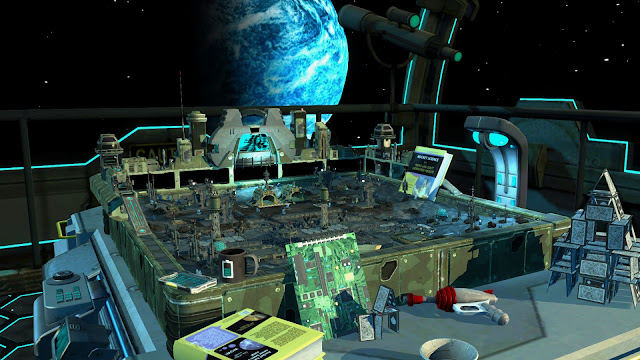 For playing online, you need to have PlayStation Plus and an Ubisoft Uplay account, but the online play was fun. My first match had some server stability issues as we all got kicked, but subsequent ones worked quite well. Additionally there is a nice Weekly War campaign you can participate in. There are five that unlock on different days of the week. These structured matches are quite challenging. My first involved an army of annoying assassins from Assassin’s Creed wrecking havoc on my army as they wove in and out of tall grass. It was fun, challenging and I am curious to see how future sessions shape up.

Toy Soldiers: War Chest really nails its toy aesthetic. Whether you have Battlecat running across a bunch of markers, or you blow up overly aggressive My Little Pony look-alikes (which naturally explode into rainbow hearts when defeated), the game is beautifully realised. There’s a healthy number of items to unlock, characters to level and modes to play will keep you coming back for more. It’s a pity then that it’s burdened by some painful attempts to demand players throw in some extra cash for the DLC.