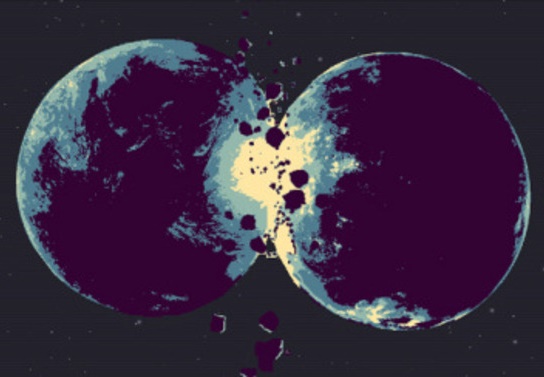 It’s funny how so many people play games for relaxation, and yet so many modern game designers never aim to make relaxation a key element in their games. With all the frenetic combat, fighting for survival and strategic manipulation present in our AAA titles, it’s a wonder that anyone manages to relax at all while playing games.

Which brings us to RymdResa – a roguelike and space exploration title by indie studio Morgondag, set to be released on Steam, iPad, Xbox One and Wii U. RymdResa is a procedurally generated title which puts you in the shoes of an unnamed pilot vying to save the human race after the destruction of the earth. It’s about collecting resources, exploring the galaxy and surviving to tell the tale, but most of all it’s about lots and lots of empty space. This is truly a game to relax to, and once you settle into the meandering rhythm of a vast galaxy the magic of Morgondag starts to set in.

The overall gameplay is very simple and is reminiscent of thatgamecompany’s flOw. You control a spaceship from a top-down perspective, flying through randomly generated space and completing a series of missions. Said missions revolve around rebuilding the human race through a combination of exploration and scavenging, although they are by no means urgent and you are free to fly in whatever direction you like in order to see what you might find. 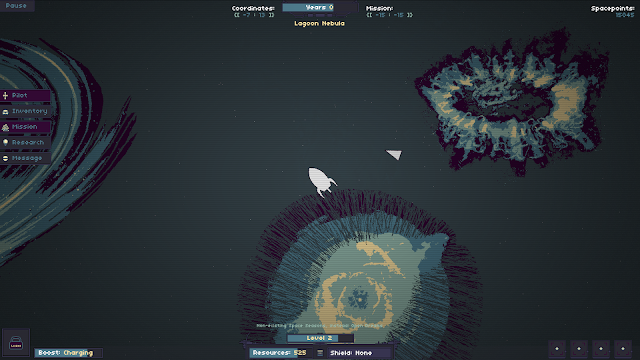 RymdResa aims to take a hard sci-fi approach to space exploration. If you start moving, you’re going to stay moving, and it’s not long before you realise that the best solution to take in the game’s vastness is to float at a leisurely pace and explore anything interesting which happens to fly by. This is where RymdResa takes inspiration from roguelikes and other role playing game conventions. “Explorations” are kind of like RymdResa’s answer to random encounters – if you ever happen upon a planet or something else of interest in the depths of space, you can fly to it and click it for a chance to gain extra resources or money. Some of these come with small poems, others with a vignette of the story left behind, and others with a choice to make. While it’s a novel idea, I felt that the overall safe and predictable nature of many of these encounters lets the mechanic down somewhat.

It’s not all fun and games however, as your journey will occasionally be impeded by asteroids, space debris and suns, all of which will tax into your resources if you fly into them. These resources are also used to power your ship and when they hit zero, it’s game over. It’s a very simplified system which definitely works towards Morgondag’s aim to create a relaxing game, since you’ll always be aware of how well you’re doing and there are never too many variables to stress you out.

You can eventually use your accumulated money or Spacepoints as the game calls them to purchase new and more powerful ships. These can also be equipped with items you find throughout your journey to add some light RPG elements to your exploration. Stronger ships will let you survive for longer and give you a better chance at reaching the deeper sides of the game world, which will yield more powerful rewards. Upon making significant discoveries or passing certain milestones in the game, you are rewarded with yet more snippets of poetry. It’s clear that the persona in RymdResa is very, very depressed, likely due to the loneliness and wistfulness that a life in space would bring. It takes a special mindset to appreciate the poetry and not write it off as too pessimistic, although I do admit that on a bad day listening to the lamentations of a man stranded in deep space can put your own worries into perspective. 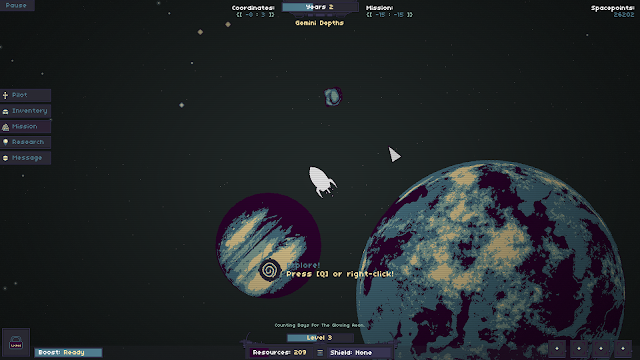 My main gripe with RymdResa is that it promises a vast world to explore through its procedural generation system, but there just isn’t enough content to make exploration stay exciting. Just a few hours in you’ll start to see repeated content; you’ll visit the same planets and read the same poetry and just a little repetition is enough to kill the illusion of scope that Morgondag wants to convey. Furthermore, the game almost goes back on its promise of being relaxing in its final chapter in which a lot more obstacles spawn and death is an overfrequent annoyance rather than an inevitability to be pondered.

All that aside however, RymdResa is still a fascinating exploration into a facet of gaming which largely remains untouched. Morgondag have created a soothing and contemplative experience which makes the most of its slow pacing, and while I thought I’d get bored easily while drifting aimlessly through space, I managed to sink hours at a time just watching the stars fly by as I slowly but steadily rebuilt the human race. With time and patches, this could be a must play, but as it is I can only cautiously recommend RymdResa as a game with fascinating ideas and inconsistent execution.