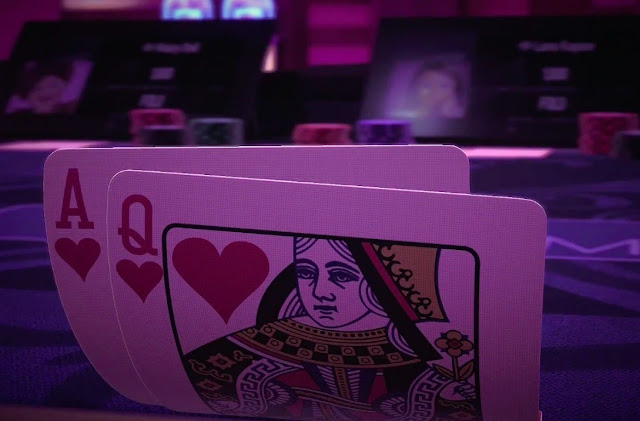 I’m actually quite good at poker. At least, I am at first. Every time I play poker the following little narrative happens:

I sit down at a table with friends (or whoever I’m playing with), and we all toss in $20 and grab some chips. At first, I dominate the party. My sense of timing in picking winning hands is infallible. I’m bluffing like a pro, having people fold when I’m running with a Jack as a high card. The frustration on the faces of the other players is clear to see.

But then I hit what I like to term the alcoholic event horizon. There is a point where, after drinking a certain quantity of alcohol (more if it’s beer, less if it’s bourbon) that I tip over that edge of being a really careful, clever player and become Captain Risky himself.

My favourite (in hindsight, at any rate) was the time that I went all in – with the equivalent of about $42, with a pair of twos. The other guy had four Kings. Good times.
Anyway, point is, I actually really enjoy poker. It’s the perfect way to spend and evening with friends sharing beers and throwing around some cards, and having that tiny real money investment in the game helps boost its appeal, making chips entertaining to throw on the table. But just about everything that I like about poker is difficult for video game adaptations of poker to compensate for. Without the real-money investment, the direct interaction with friends, and the beers as part of the game playing experience, I tend to lose interest in poker games fast, as evidenced by the dozens of times that I’ve downloaded stuff like Zynga Poker onto my iPad for a game, only to delete it, bored with it, a day later.
So it’s a testament to Pure Hold’em’s quality that I don’t see myself ever deleting this game. While it doesn’t offer me the poker experience that I generally come for, it is one of the very few takes on the game that actually manages to compensate in other ways. 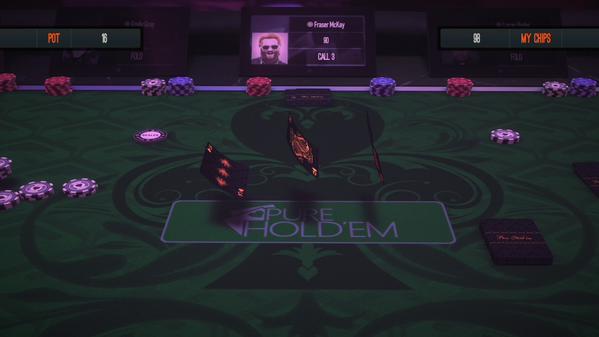 For a start, this game is pure card porn. The development team behind Pure Hold’em, VooFoo Studios, is well known for going to an almost fetishistic level of detail in recreating parlour games like Pool and Chess. Even when VooFoo’s games aren’t all that good, what is undeniable is that they get the texture, atmosphere and aesthetics of their subject matter down perfect. Pure Hold’em is another feather in that particular cap. Cards are rendered in the most exquisite level of detail, and the poker chips slide around the table with an authenticity that is irresistible. After playing this game for ten minutes I felt like writing a letter to VooFoo begging them to either start developing CCG adaptations or share this engine with developers behind Magic: The Gathering, Yu-Gi-Oh! or others, because no card game has ever been as visually stunning as this one.
Digital poker itself lacks some of the strengths of real-world poker. There’s no overt bluffing game, obviously, because players can’t see one another. However, VooFoo do a good job teaching players about the more subtle reputational-based bluffing that good digital poker players master. Good digital poker players know how to spend dozens of hands convincing other players what kind of player they are (be that a conservative player that readily folds, or a risky player willing to go all-in on lower odds). That way, when they have the right hand for a bluff, they’re able to execute on it by having the other players assume they’re playing along to reputation. To help get new digital poker players in line with this kind of strategy, VooFoo has helpfully included a range of different AI behaviours for players to practice against. They’re not pushovers, either.
Of course, the real strength of poker is in the multiplayer, and I’m happy to report the netcode is pristine and the online experience is generally very good. You’ll always have some players that go all-in on every hand (especially on the tables with lower stakes), but I found player behaviour in this game to be generally better than some of the free poker applications out there, such as Zynga Poker. It’s not a perfect recreation of the experience of sitting around a real table, but there’s a greater level of intensity in the card tossing in Pure Hold’em than elsewhere, and I found that to be compelling. 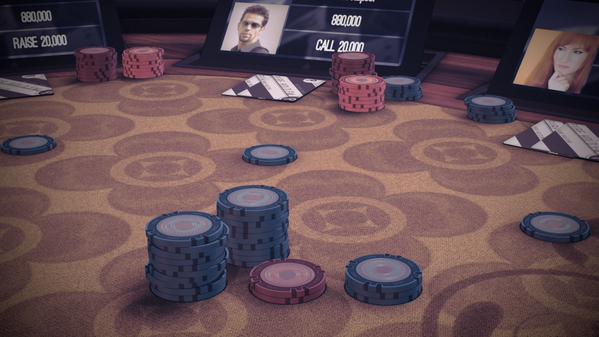 And the alcoholic event horizon is as relevant in playing this game as when I play real poker. I might not be playing for real money, but replacing chips can be a microtransaction if you gamble too big (there are plenty on offer for free unless you go crazy), so there is some sense of value to the chips which should encourage you to think twice before going all in on a pair of twos. Unless you’ve had one too many beers.
It’s worth noting that you could also set up a real money competition if you were so inclined. It’s possible to create private rooms so that, even if your poker buddies are in different states or countries, as long as they have a copy of the game on their PS4s you can safely set up games that won’t have randoms coming in to mess up.
Related reading: An interview with VooFoo’s creative producer from 2013.
That’s still not perfect, as it’s the physical interaction of being in the same room that makes poker such an addictive social activity. I doubt any digital poker game will be able to completely replace the real, physical game, but Pure Hold’em is nevertheless a truly special experience, and as premium poker games go, we won’t see a better one than this for some time to come.