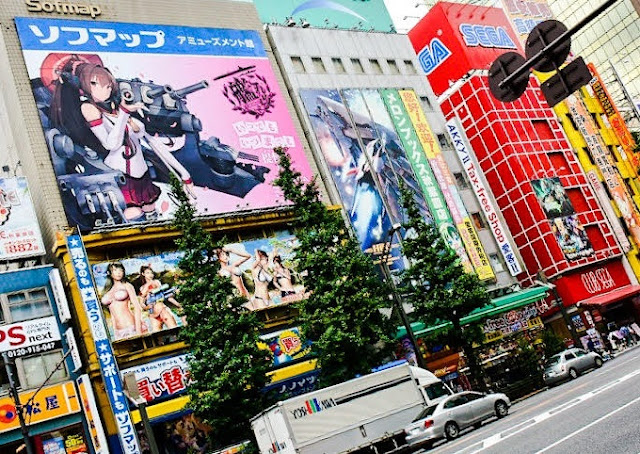 Okay, okay, it’s time to get Akihabara out of the way. I doubt this will be the only time I visit this year, because I do enjoy my time there too much, but given I was already there for the Final Fantasy XIV restaurant, I figured I would use the opportunity to do a dry run through the shops and investigate what is going hot at the moment.

As always, just getting off the train and walking to the main street that cuts through the city is an experience. You emerge onto a very, very wide road, with a long line of very tall buildings on both sides of the street. This road is wide, and so it is a very well-lit space, unlike some cities with tall buildings that make you feel like you’re marching through a surreal, tall tunnel. But even if it wasn’t Akihabara would be a bright place, with giant billboard posters of anime girls in swimwear everywhere, and even more giant screens playing trailers and promos for the latest games, anime, and so on.

What is notable about Akihabara is that in the past couple of years it has changed quite dramatically. It was originally Tokyo’s electric city, where you would go to buy your video games and shop for laptops and things. Even five years ago it was the place to go for games and gadgets, but in modern times the city has undergone a bit of a shift. There are still plenty of electric shops around – including one of the biggest Yodabashi Camera electronics department stores in the country – but while there are some game shops hanging on (including the #1 destination for retro gaming, Super Potato), the rise of mobile gaming and digital distribution in Japan has made it really quite difficult for dedicated game shops to survive. 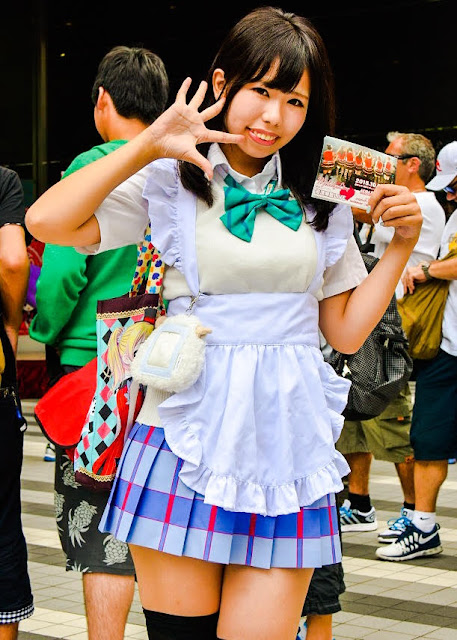 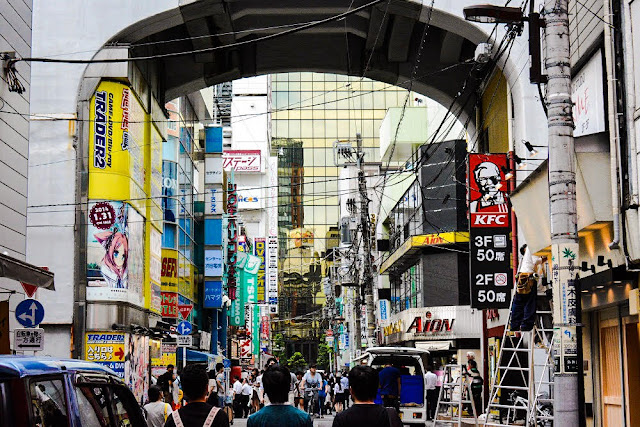 So Akihabara has in some ways redefined itself to remain relevant to the stuff otaku will still purchase in stores. Both when I was there last year and this new trip I’ve noticed that, in addition to ever-expanding range of maid cafes and ever-constant presence of AKB48 and other wannabe idols, Akihabara has definitely ramped up on the figurines shopping.

The main street is utterly littered with second hand miniatures shops. The most interesting of these was actually a shop of “rental boxes” where independent collectors could hire a small space in the shop to display their wares. Dozens and dozens of collectors have done so, meaning that the shop is filled to the brim with some of the rarest and most interesting figurines you’ll find anywhere. In theory this shop would be awesome fun to spend hours in and investigate in full, because different sellers would price their figurines at different prices, so you’d be able to find some real bargains with some patience. Unfortunately after being bulldozed, thrown around, and pushed out of the way as rabid otaku raced around the place to get their hands on their own dream toys, I made a quick exit from this one.

Speaking of the crowd, of all places in Japan Akihabara is perhaps the least Japanese of all. The city has become an absolute haven for tourists, be that Chinese, Korean, or pale-as-pale-gets westerners, and while the pocket of multicultrualism is interesting as something so completely different to the rest of Japan, it also means that the actual Japanese go elsewhere for their toys. I’ll be covering that in a future DDNet does Japan, but for now let it suffice to say that there is a reason that Akihabara has become a tourist trap over a local shopping haven: it is incredibly easy to get ripped off without being aware of how the city works. In once instance I spotted a relatively uncommon Hatsune Miku miniature in a shop for the equivalent of $120. A shop on the other side of the street, belonging to the same chain, was selling the same figurine for three times that. My advice should you come shopping in Akihabara is to visit every shop you’re interested in first, take mental (or, better yet, physical) notes about what interests you and at what price, and be prepared to buy it elsewhere cheaper later on. 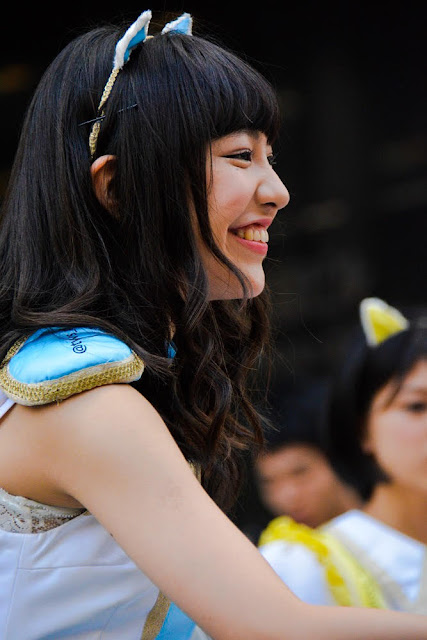 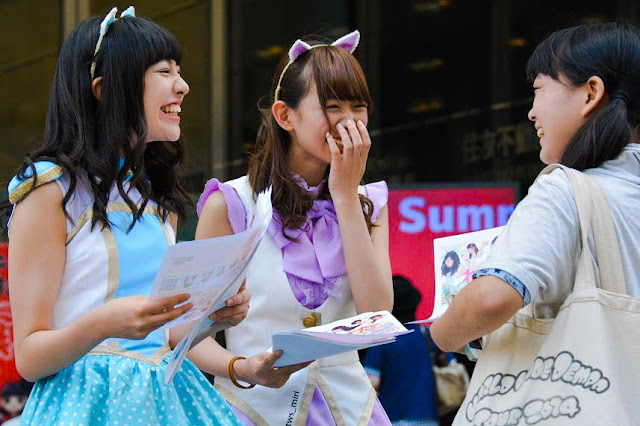 There is also a certain seedy reputation for Akihabara that is difficult to shake. Lined across the main street are a chain of shops calls Lammtarra. On the first floor the goods this chain sells are innocent enough, but by the time you hit the third or fourth floor you’re going to be experiencing the incredibly expansive range of genres of Japanese adult entertainment. Many more genres and many more DVDs than you’ll ever find wherever you come from. Some genres that will get you arrested if customs catches you with those DVDs in your suitcase on return.

Speaking of stuff-legal-in-Japan-but-illegal-elsewhere, there’s another… delightful… shop on the main street of Akihabara called Oimoya. It’s a nondescript shop, up a couple of flights of incredibly cramped stairs, but once you get in there you’ll notice that it specialises exclusively in junior idol DVDs, photo books and merchandise. The main street of Akihabara. I made the mistake of wandering in there out of curiosity last time I was in Japan. The retreat was tactical and quick. It’s still there, as far as I can tell, though I wasn’t about to muster the courage to confirm it this time around. Even more delightfully, according to the website (which I won’t link to because I don’t actually want to support it), it is apparently still possible to spend an awful lot of money to go along to an event and take photos of these aforementioned junior idols.

There are indications that the Japanese government will crack down on these more fringe activities and shops in Akihabara. The country is getting ready to host the Olympics in 2020, and it will clearly want to avoid controversies such as questions like “why is this shop allowed to exist on a main street of one of your main cities?” Such a crackdown has the Japanese fringe complaining about censorship, but I must admit I wouldn’t mind if places like Oimoya ceased to exist. 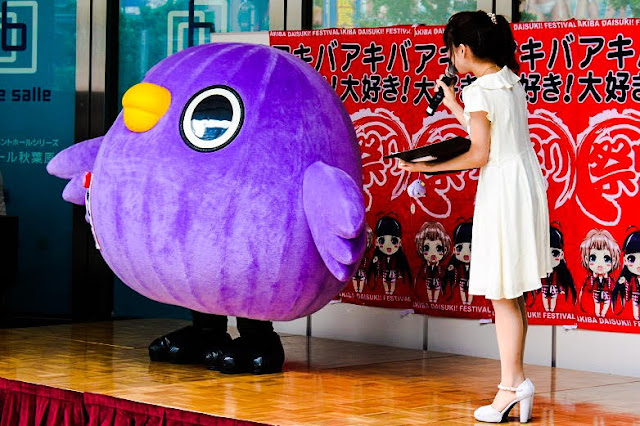 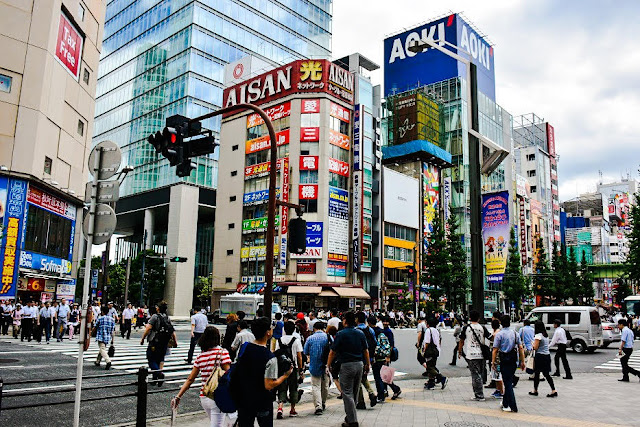 Putting aside that side of things, though, Akihabara otherwise has an energy and atmosphere unlike anything you will ever experience anywhere else, and a culture all to its own. Here, and only here, there is a socialisation and mainstream legitimacy to otaku fandom and habits that is refreshing, to say the least. At Bellesalle, which people who have played Akiba’s Trip will recognise from the introduction of Rin – it’s the open courtyard at the front of one of the central buildings in the city – there were young idols handing out promotional material, as a legion of photographers grabbed snaps (and, apparently, as a gaijin I was of interest to the photographers taking photos of the photographers… ah well). People moved through the goods shops buying some pretty alternative stuff without so much as a wayward look from others.

Akihabara may have lost some of what made it such a Mecca in the past, but still it remains the spiritual home for anyone with an interest in anime, manga, Japanese games, and otaku culture. More than anything else, it is still a whole lot of fun to spend the day there, even as I know better than to actually spend much money in its shops now.