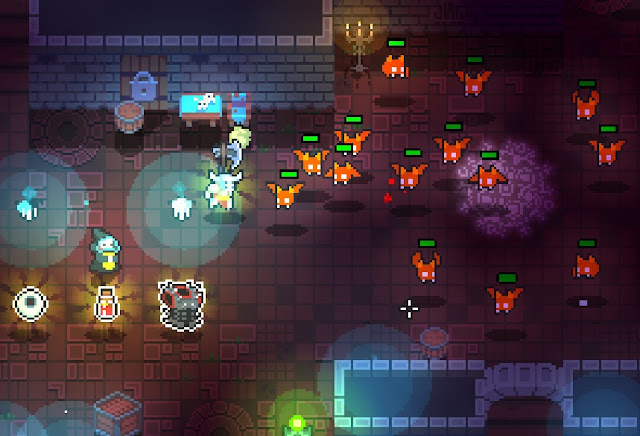 Dungeon Souls is an RPG for those who think the genre has become too bloated and complex over time. Taking inspirations from games such as Gauntlet and Risk of Rain, Dungeon Souls is part dungeon crawler and part top-down shooter as players guide their pixelated avatars through neon hallways fighting monsters, searching for loot and defeating huge bosses. Developed by Mwaayk initially as a freeware title before making the jump to Steam, Dungeon Souls is fast paced, addictive and the perfect remedy for those who love character progression but hate the life-stealing expansiveness of today’s modern RPGs.

Upon booting up Dungeon Souls you are presented with a variety of classes to choose from as well as three difficulties. Each class has a basic attack and two active skills as well as the ability to use potions. Each of these can be levelled up after defeating enough enemies and their stats can be further customised by picking up loot items along the way – standard dungeon crawler fare. The combat is fast paced and you aren’t punished for ploughing through the hallways as fast as you can – in fact an indestructible enemy called the Redeemer discourages you from staying in a level longer than you need to. This leaves Dungeon Souls feeling very kinetic – you’re always on the run, going somewhere, doing something, being challenged in some way.

The basic level structure consists of a series of randomly generated rooms and hallways, with anywhere between 4-6 “marks” which need to be activated in order to unlock the gate to the next floor. After two exploration levels, you are pit against a large boss fight before being thrown to a different set of levels with a new theme. At the time of writing there are four sets of levels, each with its own unique aesthetic, range of enemies and final boss. 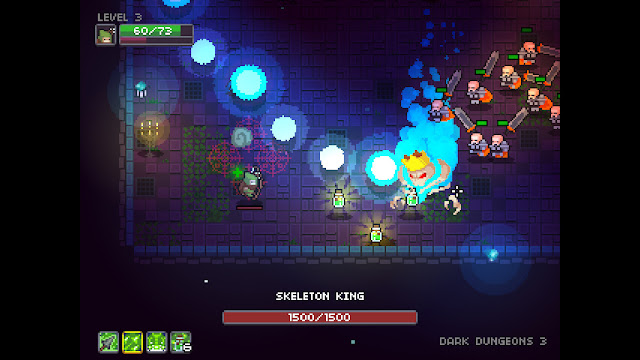 Loot is handled through a series of unique items which give small bonuses upon being picked up. This system, heavily inspired by Risk of Rain, allows your avatar to become gradually stronger without the tedious inventory management that more traditional dungeon crawlers force players to go through. The items are for the most part well designed and their random distribution will ensure that players devise ways to play while accentuating their characters’ strengths.

What really surprised me after playing Dungeon Souls for a while was how responsive the developers were to community feedback and their absolute unwavering dedication to making the best game they possibly could. Not only have they been open to changing things like controls, item balances and progression systems in order to make gameplay more rewarding, they have actively been seeking out community feedback in order to make sure their game is the best it can be. In fact, the developers have gone to such lengths as to watch streams of their own game, taking note of how others perceive their game and readjusting their game’s focus accordingly. It’s one of the most inspiring uses of the Steam Early Access feature I have ever seen – it’s one where the developers and players are truly working together to make sure the final product is the best it can possibly be.

And that’s not to say that Dungeon Souls isn’t an entertaining game as it is either. There are already seven classes with vastly different playstyles up for offer, and the randomly generated nature of the items ensures that no two runs are identical. A player can blast through the game’s current twelve levels in less than an hour, but doing so on the hardest difficulty is certainly no easy task and it’s also really fun to build your characters in interesting or unorthodox ways, such as skipping key skills. 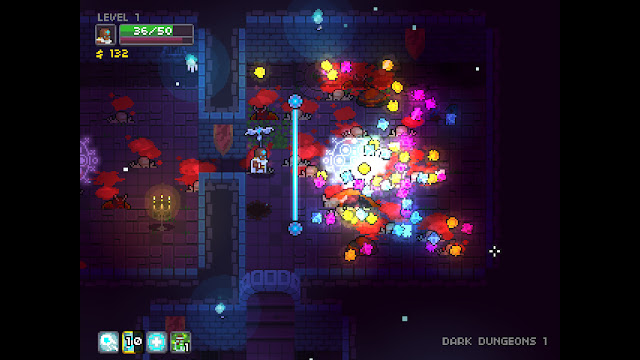 Dungeon Souls is not going to be a groundbreaking game or a revolutionary one either, but its devotion to putting energetic, frenetic fun back into the action RPG is admirable. Dungeon Souls is bright, fast and attention grabbing, making it a perfect game for short sessions. The activeness of the developers is also a big plus since we can expect much more content, items, play modes and even multiplayer to come.