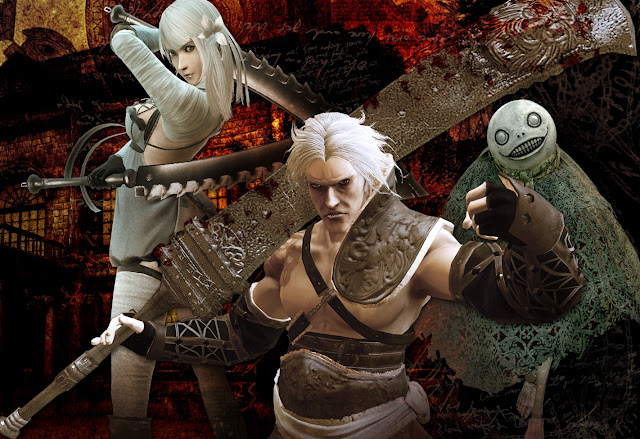 Nier is brilliant. I’ve said that approximately 100,000,000 times already (give or take), and I quite literally leaped out of bed with an almighty “OMG” when I woke up to the news that a new Nier was annouced at Square Enix’s E3 show this year (I’m Australian and the show was at 3am, okay?).

It is truly, honestly, one of the most intelligent and under-appreciated games ever created. Every second of the experience drips with meaning and pathos. Running underneath the touching narrative of a man trying to save his daughter as the last vestiges of humanity crumble around him are truly in-depth explorations of nihilism and existentialism philosophy, wrapped up in a post-modernist style of storytelling that manages to be dense, but entertaining. Dark, but humorous, sad, but hopeful. Truly, when we talk about games as art, we can discuss Shadow of the Colossus, Deadly Premonition, The Last Of Us or others, but they will always pale in comparison to the raw artistic gravitas of Nier.

But in such a flawless game, there was one thing that managed to stand above everything else; the music. Nier’s soundtrack is every bit as eclectic and dense as its narrative, but it manages to take things one step further in carrying the emotional weight of the game within it. From the clashing anger of The Wretched Automatons to the rousing Paso Doble-tinged The Lost Forest, the music of Nier paints a sweeping portrait of all the emotions of the human condition, and given its narrative themes, it stands as part of the core discussion going on in the game – what, exactly, is it to be human? And why is that question even important?

We’re not the only ones excited for a sequel to Nier. A vocalist by the name of Jillian Aversa specialises in homages to a wide range of video games, and following the announcement of a new Nier has come out with a breathtaking cover of one of the most beautiful songs on the soundtrack: Song of the Ancients.

Related reading: Drakengard 3 was also produced by Yoko Taro, the creator of Nier. This review shows why that game is worth your time too.

More than that, she’s also collaborated on a music video, directed by Landon Donoho. It’s a quality clip, as you can see below:


We saw almost nothing of this Nier sequel at E3. Production of it had barely started, but with all the major artists behind Nier coming back for the new project, backed by the raw development talent at Platinum Games, we wouldn’t bet against this new game, when it releases in a couple of years, being one of the greatest things we’ve ever experienced.