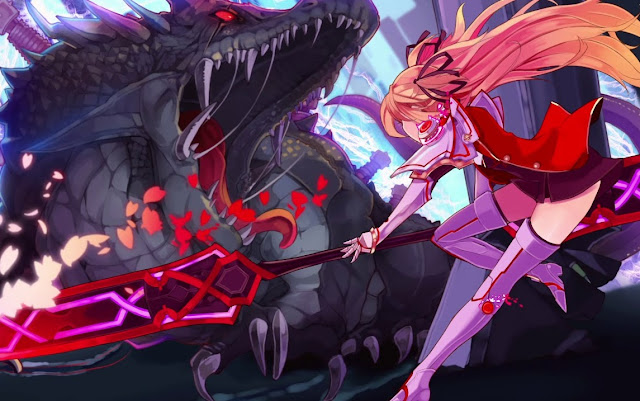 The dungeon crawler has been going through something of a renaissance recently. As the star of Wizardry and Might & Magic has faded (at least, compared to the dominant franchises they once were), we’ve seen a number of Japanese developers do some really interesting things with the genre to revitalise it.

There’s Etrian Odyssey, which made a gameplay mechanic out of the maps people used to manually draw on grid paper to remind themselves of the layout of the dungeons they were exploring. Then there’s the really exciting two; Persona Q and Demon Gaze. In a genre that hasn’t been known for producing classic narratives, both of these games worked very hard to provide a new focus on context to the methodical progression through a deepening, darkening dungeon with an endless stream of enemies. These two games have effectively modernised the genre, giving us experiences that are distinctly modern, without forgetting the heritage that inspired them.

And now we have Operation Abyss: New Tokyo Legacy, by the same people responsible for Demon Gaze. But it’s a very different game. Demon Gaze was a more straightforward dungeon crawler that had the presence of mind to throw in a somewhat surprising and self-referential narrative in for good measure. Operation Abyss: New Tokyo Legacy drops some (though not all) of the humour and offers a more pulp-fiction like blend of horror and crime fiction… while providing a fairly straightforward dungeon crawler. 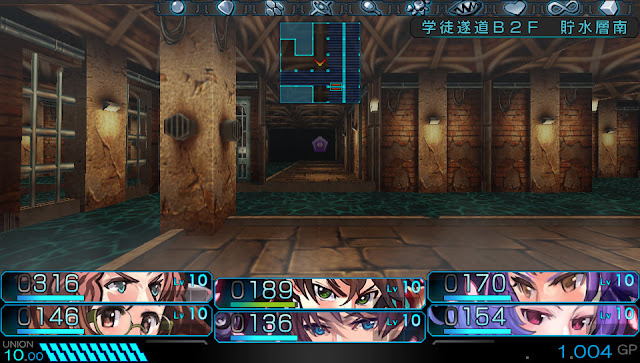 At first, the tonal differences don’t gel well. This is a game where treasure chests are literally corpses or ghosts. The game contextualises that as rewards for the player’s team of heroes recovering dead bodies and furthering the investigation, and it’s certainly a clever way of fitting the horror/ investigative fiction theme into the context of a dungeon crawler. Likewise, Operation Abyss’ monsters fit the darker theme of the game nicely, and the breathtaking artwork that made Demon Gaze such a feast for the eyes is tuned towards the more Lovecraftian monster designs in this one. It’s also backed by some creepy ambient music, too, leaving little question over whether this world was a dark and bleak one. It’s not all death and ugliness and the game demonstrates its very dry sense of humour early on in sticking an alligator boss monster into a sewer dungeon, but it’s not as overtly bubbly as Demon Gaze was.

But the theme and monsters then clashes with the living characters you meet throughout the quest, because the allies and NPCs that you’ll chat with from time to time are often of the fanservicey type, with cleavage busting out of shirts and poses that are provocative, to say the least. We’ve seen other games also create this kind of clash between moe anime and horror quite effectively – see Danganronpa or Criminal Girls, but with Operation Abyss the contrasting aesthetics tip just over the line and the juxtaposition is just a little too odd for their own good – almost like there were two different games that were smooshed together into one at the 11th hour.

But this jarring first impression fades quickly enough. After the introductory six hours or so, I was able to look past the inconsistent aesthetics, and enjoy the game for its contrasts. Operation Abyss has a unique tone, and for a genre as veteran as the dungeon crawler, that’s something valuable. And while the broader narrative itself loses some of its thematic appeal in replacing the self-aware subtext in Demon Gaze with a more standard chuunibyou narrative that we’ve seen in every second anime since the dawn of time, Operation Abyss is, generally, a well-written and entertaining little story. It gets bogged down in anime sci-fi’s love of inventing jargon and codes (there’s a sci-fi undertone that runs underneath both the horror and crime fiction), as well as a certain clunkiness when it does try to have deeper thematic undertones, but it’s nothing that anyone who might be interested in a game like this won’t be able to get along with. 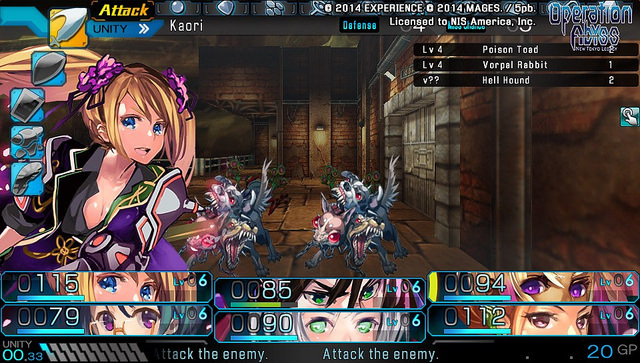 The dungeon crawling itself is quite intricate, even from the outset. We saw in Demon Gaze that the developers like throwing complex labyrinths filled with spatial puzzles at players, and that’s the same here. Just as an example, the very first “proper” dungeon in the game requires players to track down hidden teleporters in order to reach otherwise inaccessible areas… and the switches to progress further down the dungeon just happen to be hidden in these otherwise inaccessible areas.

These puzzles and dungeon layouts could have been so incredibly frustrating, and in a lesser game combing over every inch of the space to try and luck your way through the puzzles would have been irritating, to say the least. But as with Demon Gaze, Operation Abyss’ layouts flow logically and intelligently from start to finish, and players that pay attention to what is going on will understand how to move through the puzzles on an almost instinctive level. In a genre that by its very nature relies on dungeon design to separate the wheat from the chaff, it says a lot that Operation Abyss’ designs are a cut above what most of the genre offers.

Combat is similarly engaging, and the enemies that you’ll be fighting have teeth, both figuratively and literally. In regular, random battles, the combat engine allows for many, deep rows of enemies to work through, and while individually they might not pose much of a challenge, in large swarms it can be a real case of attrition in working through them, and then exploring the dungeon further afterwards. Characters can only level up back at home base, and while this means a lot of backtracking, it also creates an interesting tension in which the desire to explore will be in constant conflict with the concern over just how much deeper you can go before it all becomes too much. 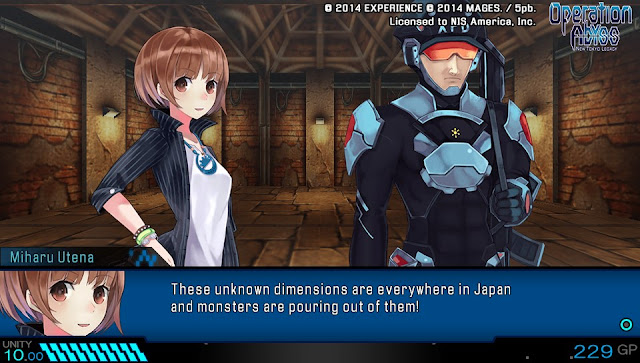 Boss battles, meanwhile, tend to be heavy hitting affairs, and work almost like puzzles in their own right. Bosses are often supported by allies that complement their own abilities, and as a result they tend to be quite resilient and hit quite hard. These battles are often over quite quickly (one way or another), but they require real concentration to work through.

If there’s any one area where Operation Abyss disappoints, it’s in the inventory system, with is clunky and unwieldy in the extreme. Item properties are presented confusingly, and even a dozen hours in I wasn’t really sure what I was looking at when I was comparing various bits of equipment with one another. Towards the end of the game I had the hang of it, but it’s not unreasonable to expect a modern JRPG to present a logical and comfortable interface for its inventory system, that makes sense from the outset, no matter how complex the mechanics behind it are.

Thankfully when all the mechanics do start to make sense the Operation Abyss has a depth to its systems that will appeal to the most committed of statistics fiends. At a time where character tweaking is being deemphasised to tracking a handful of statistics at best, Operation Abyss is happy to allow you to delve deeply into many, many different numbers systems. Players have a lot of control over how their characters level up, and beyond that there’s a full and comprehensive item crafting and enhancement system, and dungeons are absolutely filled with loot to help enable this. All of this might be a bit overwhelming to the JRPG newcomer, but Operation Abyss doesn’t try to be an introduction to the genre, and seems to be very content with appealing to the more experienced dungeon crawlers out there. 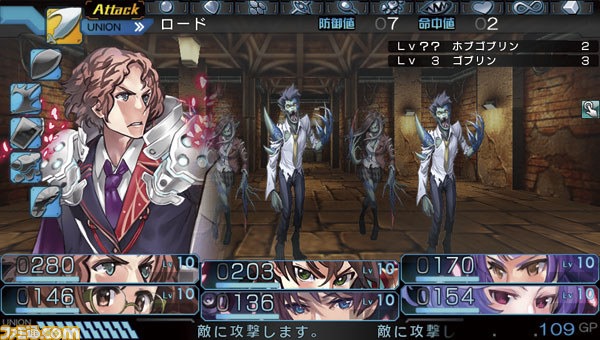 The PlayStation Vita might be a legacy platform in the eyes of Sony executives, but as long as publishers like NISA and bringing games like Operation Abyss to the west, there’s no reason to pack the device away into the attic. Operation Abyss is a thematically unique dungeon crawler, with some great systems underpinning it, and some of the best level design in the genre to date. And for all that, it’s a real, genuine triumph.

Trailer: Gust’s Yoru no Nai Kuni is everything we wanted from Gust on PlayStation 4