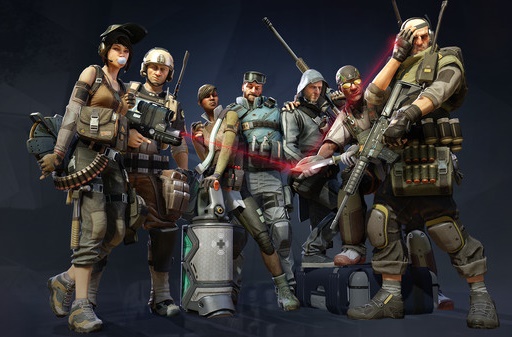 Dirty Bomb is a fresh take on the FPS genre, despite a name suggesting something very generic. It’s a bit of a throwback to faster paced shooters such as Team Fortress and Quake but it also has an much greater focus on teamwork that many other, similar games.

Visually the post-apocalyptic setting and frequent use of cooler colours (blue in particular) reminded me Brink, a game that that came out on consoles several years ago. That title never really took off in terms of popularity back then, but despite its warts it had some good ideas behind it, and the aesthetics were one of the highlights. Here Dirty Bomb looks like a game that has taken the good ideas from Brink, learned from its failings, and created some really solid objective-based game modes that are fun to play.

Dirty Bomb is a free-to-play competitive multiplayer game, and each of the classes are fairly well balanced. Unlike in some FPSers you do not get to customise loadouts (which for me is a slight bummer, because I do enjoy tweaking my loadouts in FPSers), but the class balance benefits as a result. If you want to play a medic, sure – you can engage in combat with someone, but you are better off making sure that you keep your more powerful team members alive. Without you, they will not succeed, and objectives will not be met. 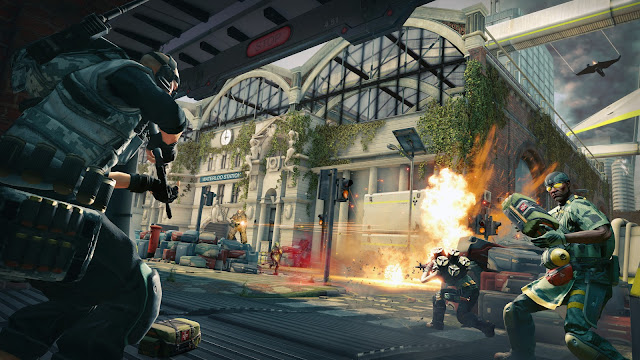 Of course the concern with free-to-play is what do people get when they do drop money on the game? And, more importantly, what kind of advantage are they buying? With Dirty Bomb you’re buying into classes and the like that you would also be able to earn through normal play. Critically, while some classes might be more desirable than others, none of them are truly overpowered. I never loaded into a map and saw two of a particular class on the other team and thought “oh great. We’re going to lose to them because this is actually a pay-to-win title.” That being said, while you can grind and log plenty of hours to unlock things as well, it does take a long time. Clearly the model that Splash Damage has adopted is one that hopes players will enjoy the game, and then spend money on it to spare themselves some of the more lengthy grinds.

Some classes are certainly more capable of going solo than others. These are usually the armed-to-the-teeth ones. As someone who prefers snipers in most of my shooters, it was a little frustrating at times to try and take someone down that is moving so quickly and requires multiple hits to take down. One headshot is unlikely to drop an opponent, and body shots can require a half dozen or so bullets depending on the weapon being used. As a result, snipers and medics absolutely have a role in missions, but perhaps could use some tweaking, because most players seem to gravitate towards the mobile arsenal classes at this stage.

Level design is a particular high point, presenting an exciting look at a post-apocalyptic vision of London that can be hauntingly beautiful, despite the cartoonish sheen over top of the visuals. There were plenty of moments were I simply paused, took in the area and found myself wondering what had taken place to make it look like it did. The post-apocalyptic setting may be somewhat overused in games, but it is still among my favourites, and there is plenty of unrealised potential in this instance. There is room for some future expansion around some of the more visually interesting levels if the development team wanted to add deeper story-based objectives. But in terms of what is there now, the levels are relatively open, which is good to see, as too many FPS gamers these days focus on tight corridors and chokepoints. Open levels encourage teamwork and give people opportunities to work in collaboration with one another, and that opens up a greater range of tactical opportunities. 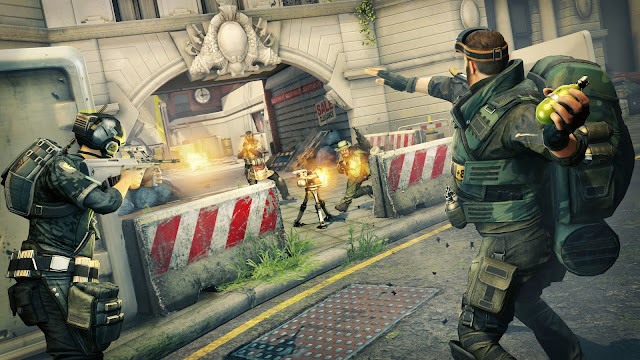 This strongly slanted team play will probably frustrate single drop in and play gamers, because random groups of people tend to fall into disarray. This is okay if the other team is equally disorganised, but gameplay balance can get out of hand very quickly when one team operates as a unit and the other suffers from the lone wolf mentality that is so pervasive in the FPS genre these days. So if you are playing Dirty Bomb it’s better to work as a cohesive unit. If you are playing Dirty Bomb with friends and working as a cohesive unit, the game is quick to reward you for completing objectives.

Despite all of these things that Dirty Bomb does really well, there are some nagging concerns. The menus are sloppy and unintuitive. The lack of customisation means that there is very little sense of progress. Unlocking new classes is fun, but I admit my biggest hooks in most modern shooter games are the unlocked weapons and loadout flexibility. I also prefer controllers to mouse and keyboard layout when playing FPS games, but there is no controller support – and it does not sound like the developers ever plan to add it. This developer decision is born of some kind of desire to remain traditional to the older PC FPS experience, but it’s worth noting for those who like choice in how they play.

Dirty Bomb is fresh and fun with fast paced team-oriented action, but is lacking in some of the areas that modern FPS have matured into. But it’s a good start to the franchise, with opportunities to expand upon the world there, add some story context and hopefully flesh out the experience further.

Interview: On Toren, art, and why Brazil’s Government is showing the world how to develop modern creative industries