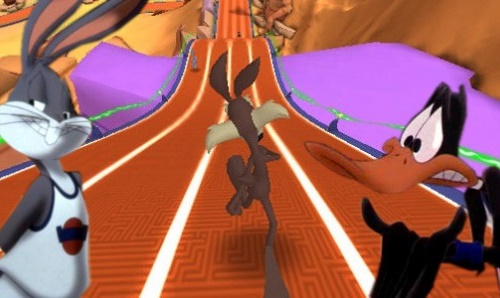 It’s always a bad sign for a console when the manufacturer’s own interest in it has dropped to publishing games like this. Looney Tunes Galactic Sports isn’t terrible, but it’s almost the dictionary definition of a something thrown together quickly to cash in on a license.

Which is amusing in itself, because Looney Tunes doesn’t exactly have the pull over the children that this game is aiming to pull it. It would have been far better for the developers to look to create something that would be more appealing to the older people nostalgic for the Looney Tunes wackiness they remember as children.

But anyway, I digress. Galactic Sports is a minigame compilation of six sports-themed games, each with their own Looney Tunes spin. The six games are a racing game (that actually plays more like an endless runner, as you’re dodging objectives without being able to control accelleration or speed), golf, archery (where you’ll use the gyro to aim and fire), boxing, trap shooting (which actually plays like an odd take on Galaga), and aquatic sport, in which you’ll need to collect a bunch of balls out of a pool and return them to your base before your opponents. 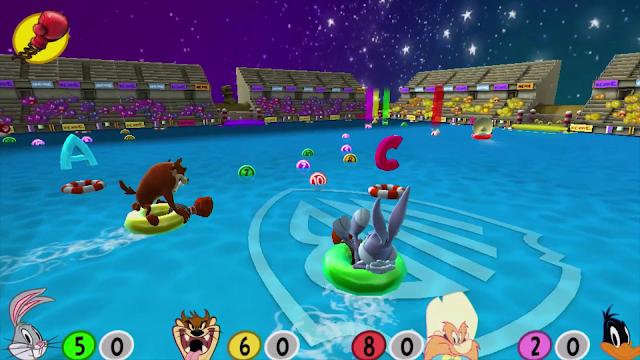 None of these games are especially complex, and you’ll have them mastered within the first attempt at any of them. Some, such as aquatic sport, boxing, and racing, are actually good fun in their simplicity, with some good level design offering some quick, fast action with precise and accurate controls that would make for good, fun free-to-play games or other similar skill testers. But in the context of a game that was released to retail, even the better half of these games struggle to demonstrate their value.

And the other half of the games are really quite weak. Golf tries very hard to be zany with all kinds of obstacles to work past, but it’s incredibly difficult to work out how hard you need to swing the club to avoid the ball dropping off the too-thin courses – there just isn’t enough information provided to properly gauge a shot. The developers have realised this in turning what are essentially par 4 holes into par 7, assuming players will miss shots, but it’s hardly a replacement for actually making the game right in the first place.

Trap shooting is truly obnoxious, with very twitchy aiming that makes it difficult to even see what’s going on once the screen fills up with enemies. Finally, archery works, but it’s a very soulless target shooting game, with rotating objects to hit for points and blocks that are placed about to make the aiming more difficult. 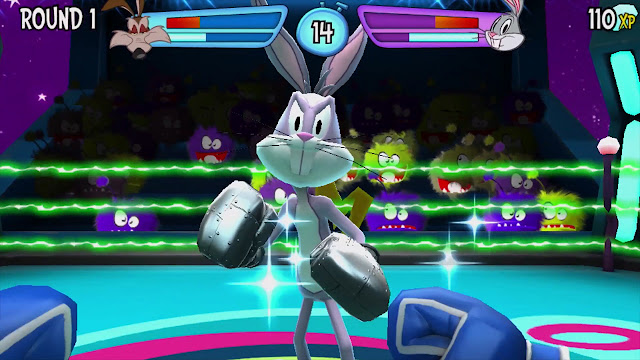 It takes about two hours play to unlock everything on offer within the game, and though it gets challenging to try and get the gold trophy on everything, there’s not a whole lot to come back to after the final character has joined the roster. There are items that can be purchased and act as power ups to make the various missions easier, but their effect is rather superfluous at best.

What Galactic Sports does do well is capture the spirit of Looney Tunes well. With the game being set in space (that’s a hint you should have taken from the “Galactic” in the title), there’s plenty of bright coloured ACME stuff to go with the blackness of the endless void. To put it simply, it does look like a modern take on the Looney Tunes franchise, and the characters are all authentic to the critters I grew up watching drop anvils on the heads of one another.

As I said at the start. Looney Tunes Galactic Sports isn’t bad. It does what it set out to achieve. The problem is that it lacks any ambition to do anything more than a cash-in, and this game really isn’t going to be remembered as the finest project Sony backed on its PlayStation Vita platform.