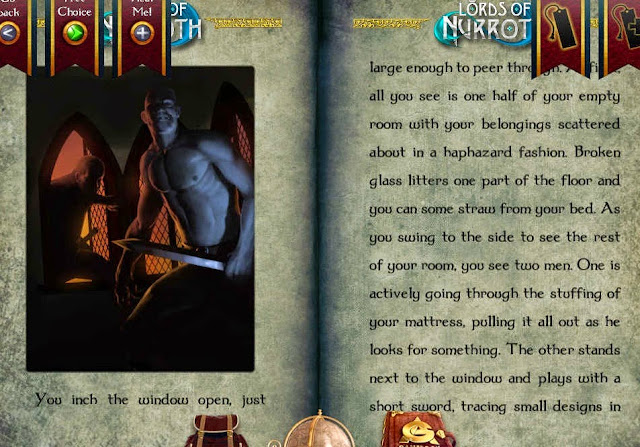 Specialist developer, Tin Man Games, has become one of the most reliable sources for a shot of nostalgia on the Apple iPad. Anyone who has fond memories of the Choose Your Own Adventure or Fighting Fantasy gamebooks will surely have experienced at least one Tin Man Games app by now.

The company has produced a range of licensed apps for a whole series of gamebooks, from Fighting Fantasy through to the likes of the utterly brilliant Ryan North’s To Be Or Not To Be, but I personally find myself enjoying the Gamebook Adventures series. These are original gamebooks, not digital recreations of classic titles, and now, ten books in, there’s a lot of variety on offer.

The new one, Lords of Nurroth, puts you in the role of a master thief, as you skulk around a city mired in political intrigue and filled with shadows – both literal and figurative. Thrust right into the middle of something massive, you need to make careful (and clever) decisions to both earn a fortune, and avoid getting a knife in the back. As with all Gamebook Adventures, it’s not necessarily an easy task, and there are many, many endings that you can arrive at through the decisions you make. Many of those are very unsatisfactory, and a key part of the appeal in Lords of Nurroth, as with any gamebook, is replaying it over and over again to take different paths and experience different branches of the narrative. 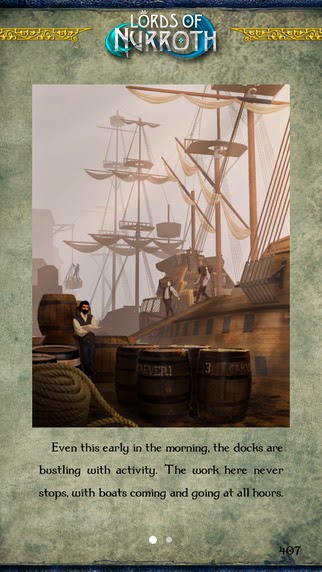 Anyone who has played a Gamebook Adventure title knows what to expect from Lords of Nurroth in terms of presentation; it offers a simple, pleasant interface designed to replicate the experience of reading a book in its entirety. There’s a lot of words of text (with adjustable fonts, for people that like their words large, or small), and the occasional still image to help visualise the setting and action. During combat, when dice are rolled to determine who wins and who dies, the game shows its most flashy effect in having dice rolling animation that does show a quality physics model and tactility. I could watch those dice roll all day long (I’m a fan of Dungeons & Dragons. I have a fetish for dice).

Finally, as you play along a simple soundtrack loops in the background to set the mood. Tin Man Games has a real ear for creating music that matches the tone of the narrative perfectly, and Lords of Nurroth is no different. It is the music, more than anything else, that makes you feel like you’re reading a text version of a game like Thief (only, unlike the recent reboot, this one has an interesting narrative). And that’s just cool.

And so, while the overall experience is very pleasant, Lords of Nurroth isn’t the perfect gamebook. While I was reading through it I encountered numerous spelling errors, which is unusual for Tin Man Games. And while this is completely anecdotal I was left wondering at the total length and number of branches in Lords of Nurroth, which seemed to be shorter and fewer than is typical, respectively. There’s still enough in there that I had a good time and enjoyed playing a master thief for a few hours, but I suspect that perhaps the Gamebook Adventures series isn’t quite the money spinner that it used to be for Tin Man Games, and this one was churned out in-between the relative megahits of To Be Or Not To Be. 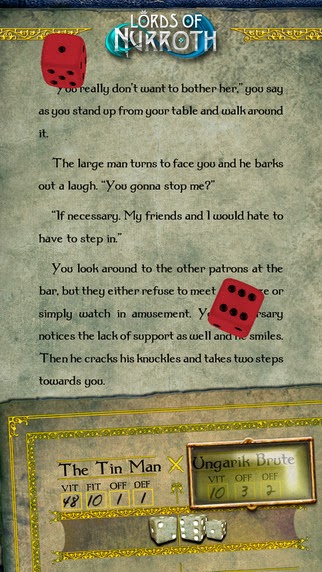 Related reading: An interview with Neil Rennison from Tin Man Games on the gamebook genre.

I hope I’m wrong with that suspicion and Gamebook Adventures 11 is a true return to form for the series, because while Lords of Nurroth is a fun concept and narrative, and yet another rush of nostalgia for fans of the gamebook genre, it’s not quite up to the standard of the series’ finest.

Armello is coming to PlayStation 4, and that’s just awesome