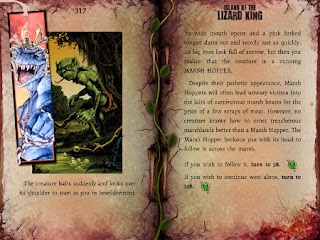 I didn’t expect to see a new gamebook from Tin Man Games so soon after the excellent Gun Dogs. But it looks like Neil Rennison and his team are working on overdrive, because just a few short weeks later here I am playing a iPad version of one of the Fighting Fantasy games that I have the most fond memories of.

What a hit of nostalgia is has been. A quest through steaming swamps in a tropical nightmare has always been a happy hunting ground for pulp fantasy and horror, and Livingstone played it up for everything it’s worth in his writing. It’s quite a deadly adventure, too; even despite having played this book many times over, hazy memory about specific traps and the sheer deadliness of encounters meant I lost and needed to restart more than a few times. There is of course a bookmarking feature allowing people to go back to a previous page if they make a mistake, but I’m a purist with these things and decided to restart instead. 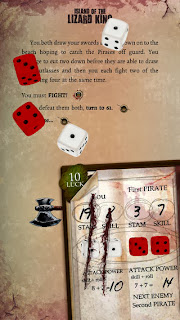 Across the quest you’ll be squaring off against insane natives, monstrous lizardmen and worse evils. As mentioned it’s all very pulp, but appealing so, and made compelling by Livingstone’s deft sense of pacing and humour. As with every other gamebook, if the narrative doesn’t capture your imagination then the game itself won’t, as the mechanics behind the experience are simple, but that goes without saying, doesn’t it?

There isn’t much that I can say about the game’s mechanics that hasn’t been mentioned before in one of our many other reviews of Tin Man Games’ work. There’s a slick interface that’s easy to work with, and a combat system that simply involves rolling dice, and the one with the higher roll wins and damages the enemy. As with any other game where dice is core to the experience, there is the potential for random lack to cause frustrating deaths. Actually, scratch that, frustrating deaths are part of the experience, but the desire to read on and work through what ends up being a nicely brief experience makes it easy to pick up and try again.

There’s a cute little nod to what most gamebook players would do when the dice went against them in a quest however; it’s possible to tap the screen once if the dice roll is obviously going against you to make the dice ‘bounce’ and giving you a second chance at a better result. This, coupled with the achievements and bookmarks system encourages players to explore each of the different options presented to them through the game, as the consequences are not too severe and there each different set of options yields a decidedly different experience.

As always with Tin Man Games is supported by a simple, but effective seance of aesthetics. The background music fits with the game’s theme perfectly, and the incredible, classic, art work helps set the scene.

It’s great to see that Tin Man Games is able to be so prolific within its niche and provide people with a huge range of different books to choose from so that they can pick the experience that best suits their tastes. If you’re anything like me, however, one book isn’t going to be even close to enough.