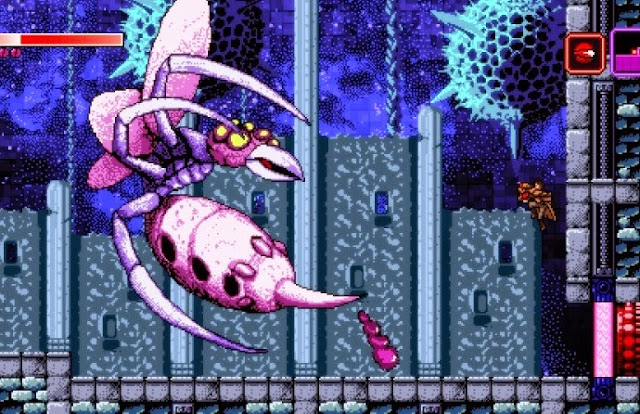 Imagine you’re hungry; hungry for retro platforming shooters, but have no retro consoles sitting around. How would you resurrect those past memories of Bionic Commando or Contra; or if you’re of the new young generation, experience for the first time the awesomeness that is Metroid or Castlevania? The answer lies in Tom Happ’s Axiom Verge: the scrumptious meal you devour when you’re starving for some good ol’ pixel shooting.

Axiom Verge is an indie title that has the eye for detail that you’d expect to see in a AAA blockbuster. The presentation is drop-dead gorgeous and the pixel art is so spectacular it looks like it was made by a small team within the likes of Nintendo with all the resources of the company available to them. A couple of weeks ago I played Shovel Knight and A Pixel Story and I believe I declared somewhere on the Internet that those two were the greatest to emerge from this fairly recent trend that sees indie video games mimicking the art style and gameplay of old arcade games. Well, I now recant my declaration and announce to you that Axiom Verge knocks them out of the ballpark. In fact, Axiom Verge may just be the greatest game I’ve played (so far) in this year.

A freak accident transports a Mungo Jerry look-a-like scientist, Trace (that’s you), to an ancient sci-fi world that is, apparently, the answer to what would’ve been if Cryo Interactive and H.R. Giger had teamed up and made a game. The use of dark and dank colours hearken back to the more moodier pixelated adventure games of yore, specifically Super Metroid and Darkseed. The bosses may very well be lifted from the Mega Man series, but the similarities start and end with the largeness of the sprites. Bosses that take up an entire portion of the screen is no new thing, but very few games pull it off with such impressive aplomb as Axiom Verge does. 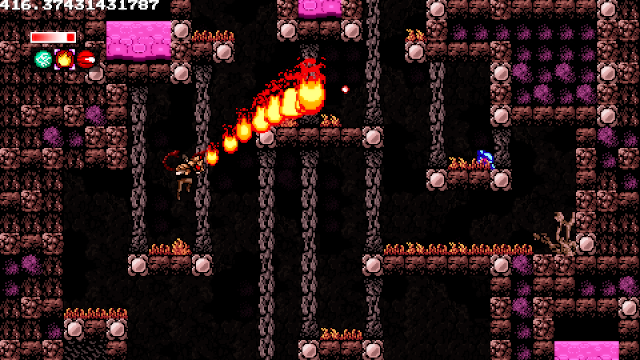 Sprite size notwithstanding, the bosses are among the seriously cool looking I’ve ever seen, perhaps the best ever yet in terms of design. However, the battles themselves are easy and some even have flaws in them. Take Telal for example: the second boss encountered, this one takes up the entire right side of the screen. I don’t know whether it was intentional or not but if you jump on him and get behind him, you can easily take him out without getting a single damage from the projectiles; Telal’s sprites are designed in a such a manner that they don’t allow him to turn right (he’s an ambi-turner! /Zoolander). It’s a neat cheat, but completely shatters the illusion of a challenging boss battle. But despite the practically non-existent challenge in those boss battles, they provide wholesome satisfaction and exciting thrills.

The game plays out in a style very reminiscent of Metroidvania (portmanteau of Metroid and Castlevania), in it that it employs extensive exploring, nearly endless supply of weapons and a large amount of backtracking. Even the transition from one area to the next is taken straight from the Metroid games. Entering a portal doorway shifts the action from one screen to the next in one blocky movement. White portals lead to either save points or other areas where red ones lead straight to boss battles. The environment is always throbbing, pulsating, squirming–of recurring enemies, alien flora and glitched objects. The world feels alive, as if you’re traversing inside a living parasite of some kind and this gives Axiom Verge a distinct edge, and like a twisted version of Stockholm Syndrome you are strangely drawn towards the danger. Developer Tom Happs spent nearly five years into making this game – and given the rich environmental detail of the game’s world, it is very clear to see the love, passion and influence behind it. If for nothing else, Axiom Verge gets mad props for its imaginative and descriptive alien world alone.

Sadly, the same cannot be said of the writing. The quality of the dialogue is quite below standard, even for an indie game made by one person. It feels lethargic and paints a very poor picture of Trace and other talking beings and non-beings that he encounters. This gripe, however, is superficial and doesn’t bog down the gameplay or anything – but you will soon be wishing for a patch that somehow erases all written content from the game altogether. 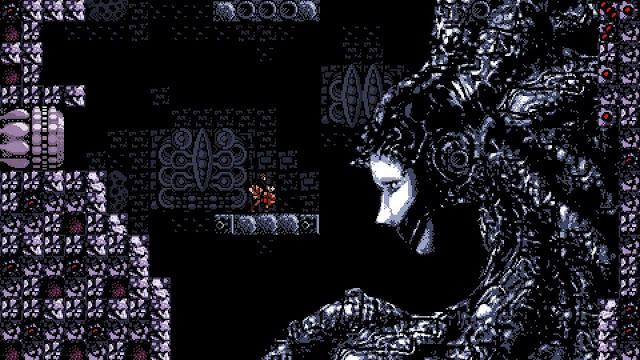 That said, Axiom Verge is a near-flawless indie game that is sure bound to entertain you with its wide array of creative weapons and deep exploration that, at the end of which, rewards you handsomely. You bet I’ll be re-visiting this game for many, many years to come.