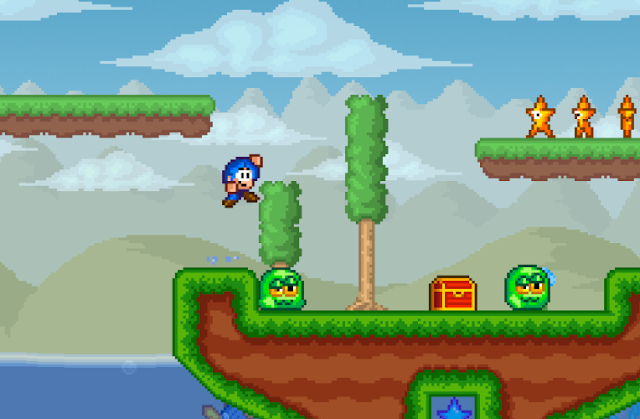 Bloooooooooooooo. Booooooooooooo. Ahem. Bloo Kid 2 is so bad it made me feel bloo. No, wait, blue! The stupid game is making my IQ bleed out all over the place.

Look, there are homages to old games out there, and it’s perfectly reasonable for indie developers to want to make them. After all, classic platformers, JRPGs and the like are what inspired this generation’s game makers, so when there’s an opportunity to build a game that shows respect to that heritage, it’s perfectly natural that a developer would get cracking with the pixels and chiptunes.

But a homage that doesn’t add anything to its basis is inevitably a sterile and uninteresting game, and that’s where Bloo Kid 2 finds itself. It features levels ripped directly from the design philosophy espoused by Mario, Sonic, Kirby, and other such classic platformers, and does so in a way that shows none of the creative joy that made those original games such classics. 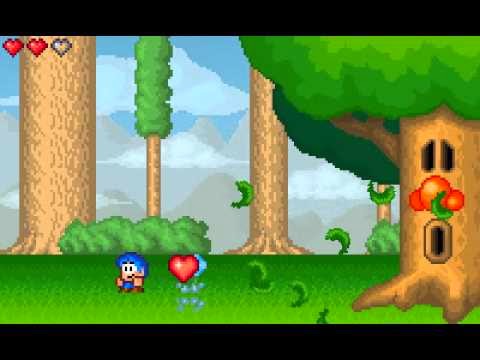 Within these levels, which follow all the nice, safe, standard tropes and are completely bland for it, our hero – the completely uninspired Bloooooooo fellow – jumps, double jumps, and defeats enemies by landing on their heads. And he collects coins too – just kidding! It’s actually stars, because true innovation is apparently swapping out a coin graphic for a star. As with almost every platformer ever you’ll need to move from left to right with the single minded goal of finding the exit to move on to the next stage.

Now, each level has got a range of objectives to tackle. There’s the basic goals (reach the exit having found all the stars and with a full bar of health), and then there’s some other challenges, such as bopping all the enemies on the head, and finishing a level within a certain time (i.e. a speedrun goal). It’s impossible to achieve every goal in a level in one run. For example, tracking down all the stars and finishing before the timer ticks out are completely incompatible tasks, and on the more difficult levels, completing the level with full health and defeating all the enemies is a superhuman task. So instead Bloo Kid 2 encourages players to grind away, playing levels over and over again to try and complete them 100 per cent.

The problem is, there’s no sense of reward to doing this. There’s no meaningful rewards, and the game lacks personality to the point where there’s no real sense of pride in utterly mastering it. There’s no social integration, no real way to share the experience with anyone else. None of the tasks are, individually, so difficult that there’s even a bragging value in achieving them. I’ll happily boast that I can complete something like Ninja Gaiden, because I have spent too many hours playing them and I’ve earned the ability to complete those games. No one cares that I’ve completed Bloo Kid 2, and neither do I. 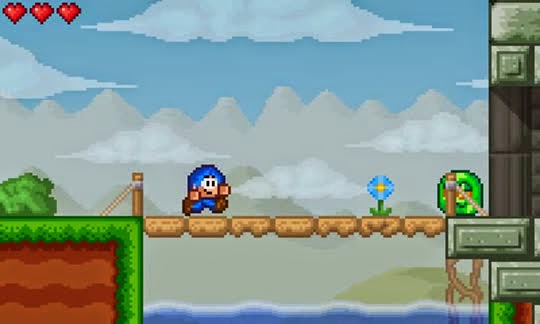 It’s also not a game that is especially impressive on a technical level. By that I mean that it’s nice that the developers have stuck in a 3D effect, but when critical bridges and ledges look a background art asset the visual effect started messing with my brain, and it was something I never quite got over. The field of vision is also too small, and Blow… sorry, Bloo, is too big, to the point where there is no real way of seeing what he can actually reach with a well-timed double jump. Some might say that this allowed the developer to hide secrets that force players to explore a level fully in order to find all the junk they need to complete it in totality. Personally I just call it an irritating contrivance that forces me to bound around like a monkey trying desperately to find the last darned star.

And that’s it about Bloo Kid 2. It’s a horribly generic platformer that tries hard to be some kind of homage to the genre’s greats, and ends up being a pale imitation of them all. Sure it’s cheap as chips on the Nintendo 3DS, but that doesn’t mean it’s worth the time investment.