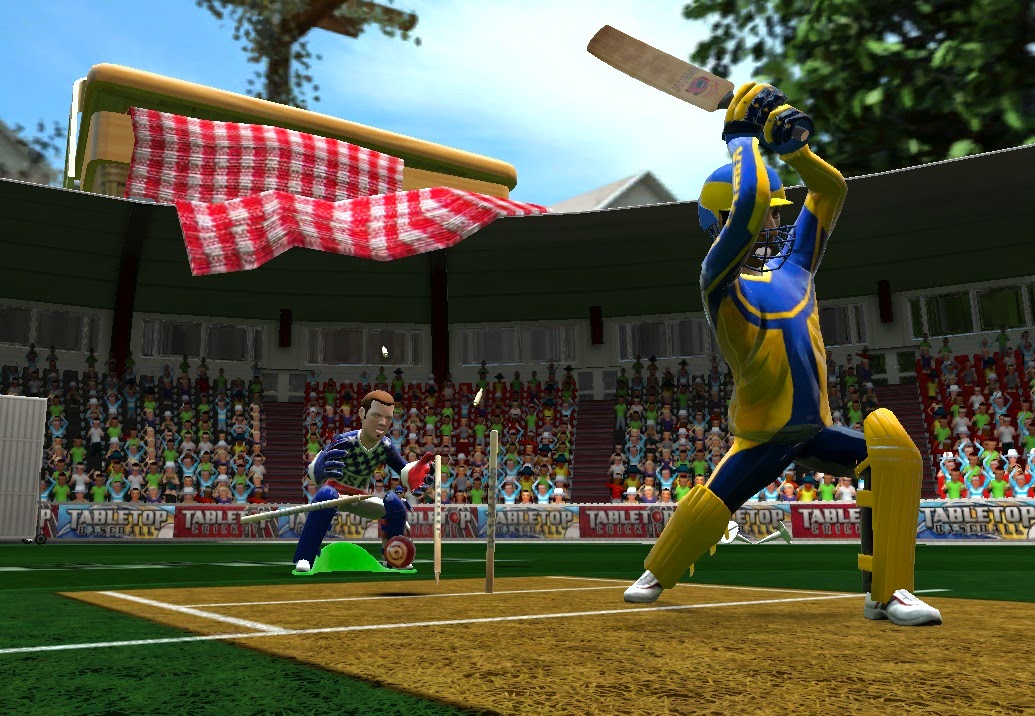 If you’re an Australian, and a fan of cricket, then you will surely know of Test Match Cricket. An admirable attempt to turn the sport into a board game, Test Match Cricket was nonetheless a rather simple and often frustrating interpretation of the game, because in trying to emulate the actual bowling and batting actions of cricket the game ended up having too many moving parts for its own good. Broken games were common, is what I’m saying.

Fast forward a decade or two, and TableTop Cricket clearly borrows inspiration from Test Match Cricket. Matches take place on kitchen tables or other domestic environments, and when you hit sixes out of the field the ball will be flying past bottles of juice and boxes of cereal. Think Micro Machines, but with little cricket men, rather than plastic toy cars. These environments are charming and enjoyable, and give the game a nice, instantly accessible aesthetic. Further emphasising the board game aesthetic is that each of the characters are designed like miniatures themselves. They don’t animate much, and can’t move. Like pieces in a board game you place them around the field, and if you’ve placed them well, the batter will hit the ball directly at them and the miniature will “catch” that player out.
Batters, too, don’t run around. Rather the field is split into ovals, with “1”, “2” and “3” marked on them (with “1” being closest to the batter). If the ball comes to a stop in those sections (and isn’t caught by a fielder), then the batter will get that many runs. If you time the shot well the ball will hit the fence and you’ll get that many runs. Time it really well, and the ball will be whacked out of the park and into the juice carton for the full score of 6. 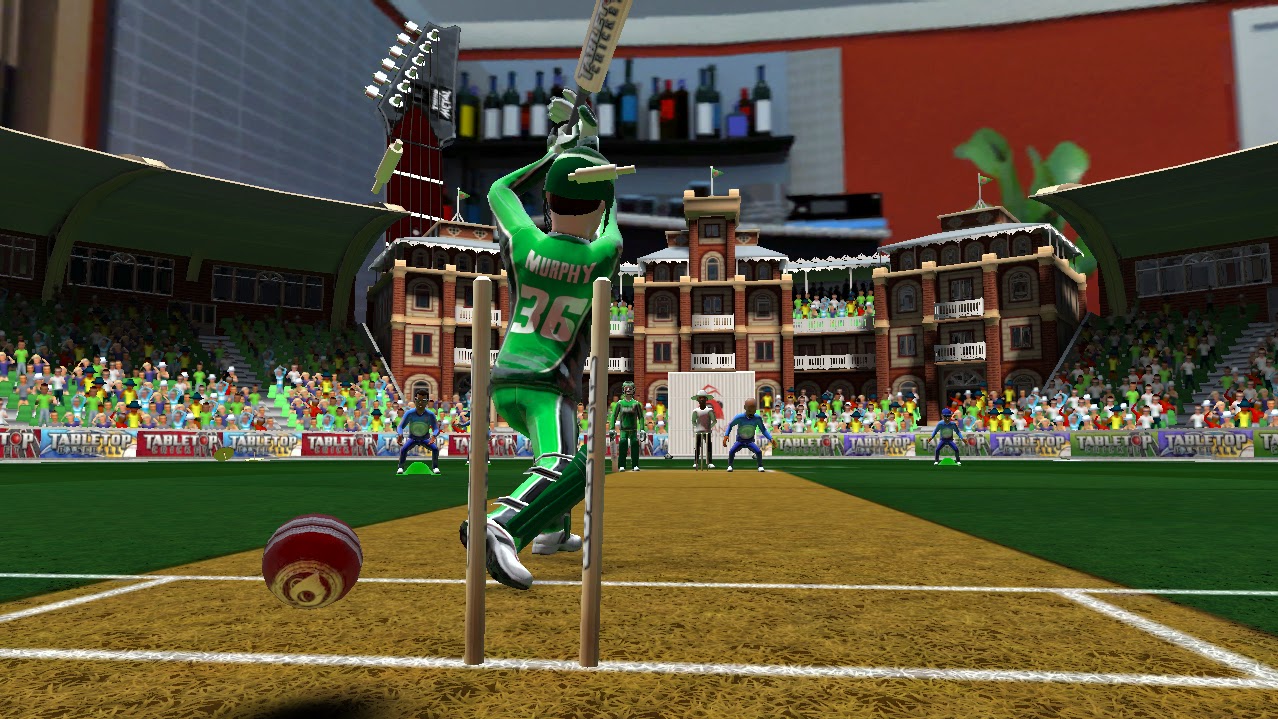 This action takes place across three match types – T10, where each side gets 10 overs, T20, where they get 20, and One Day matches where they’ll get 50. Scoring comes freely, and where a score of six runs in total from an over is considered decent in a real game of cricket, in TableTop Cricket overs of 20 or more are almost the par. In short, at first it all looks and behaves like the kind of cricket game that you might expect to see on a mobile phone – a paired down, arcade take on the sport. And in some ways it is. However, coming to us from the same team that was behind the excellent Don Bradman Cricket, it’s the right kind of addictive, arcade-style cricket game, that comes complete with refined mechanics and solid balance. It’s by no means of the same standard of the Don Bradman games, but then it never tries to be.

Where the Don Bradman games have both batting and bowling controlled by both sticks on the PlayStation 3 controller, TableTop Cricket narrows the input down to just one. When batting, you simply flick the control stick in the direction that you want to hit the ball. You’ll need to time it well though, because the mechanics can be very unforgiving. And for that reason it’s still very rewarding to slam a shot through for the maximum possible score.
When bowling, you’ll firstly determine where the ball will be pitched, and then flick the stick to determine direction. This system hearkens back to the way that just about every cricket game before Don Bradman Cricket worked, and while that system is functional, it works better against the AI than human opponents. Against human opponents that marker on where the ball will be pitched also gives away exactly what delivery to expect, which makes it all too predictable. I was so happy when the developer worked out a system with Don Bradman where there would be no pitch icon, and it’s hard to go back to what is now an archaic way of emulating bowling in cricket. 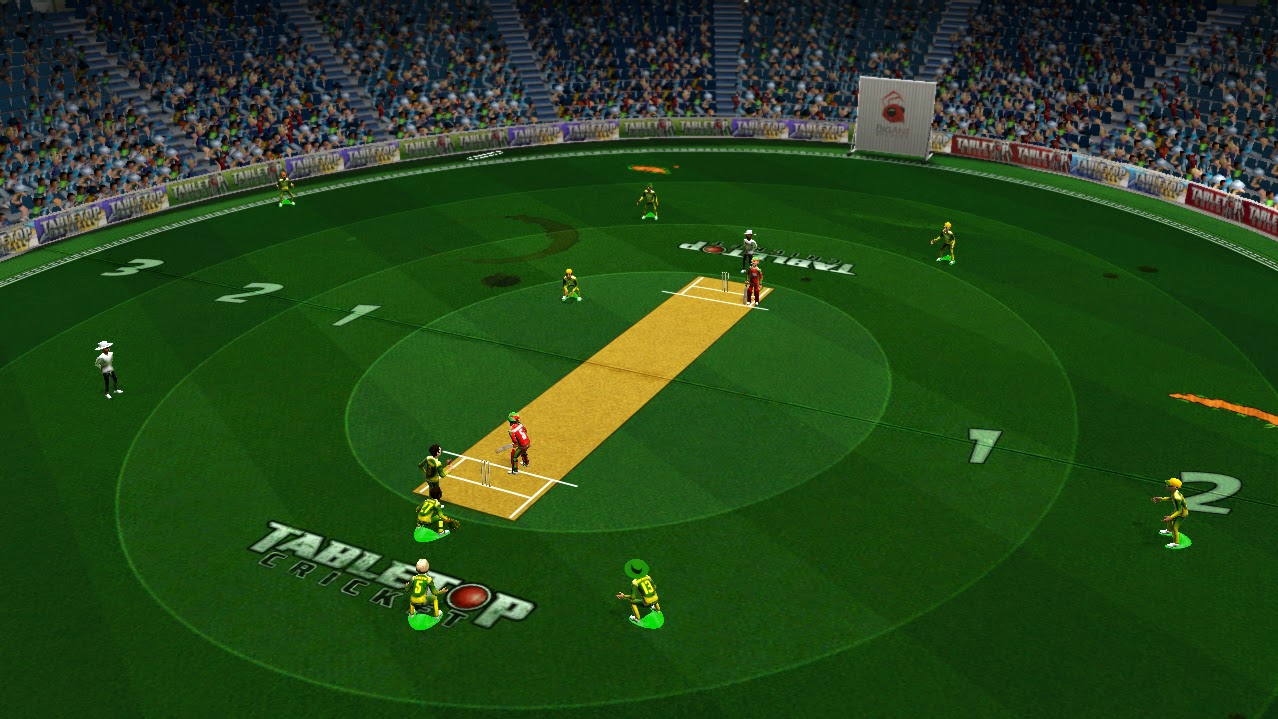 Matches are over quickly thanks to the fast pacing between bowls and strikes, and for the single player there’s only really the campaign to work through. These are split between matches against opposing teams (which range from the lowly-ranged USA first through to the might of Australia and India as later ‘levels’) and are split up through challenge stages, where you’ll need to complete an objective such as knocking over the wickets with a swing bowl within 10 tries. These challenges are unfortunately essential to complete to move on to the next level, and that’s a pity because they are universally irritating to work through.

There’s also local multiplayer and online play, which is sadly a dead in the water affair already. It’s just as well that it is a cheap download title, because there isn’t the same amount of content in this one as in the Don Bradman games.

For fans of cricket, however, TableTop Cricket is a nice surprise. It’s a hit of nostalgia for people that remember the Test Match Cricket game of old, and it’s an addictive, accessible arcade sports game that I couldn’t recommend instead of Don Bradman Cricket, but I can recommend it as a good complement to that more serious sim game.