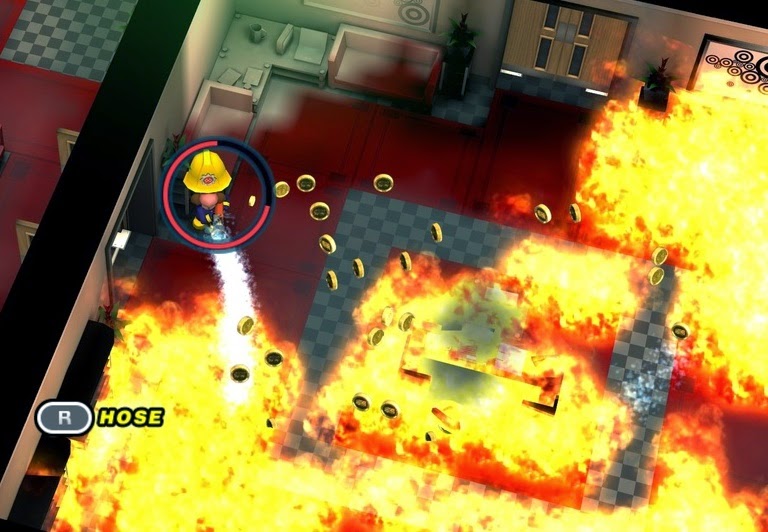 There’s something about Flame Over, a roguelike firefighting game from Laughing Jackal, that is terrifying. Before your little firefighter is a series on rooms are slowly burning, trapping the people and cats within. The goal is simple – save those trapped inside, and then save the building before the grim reaper takes the firefighter’s life, and they’re only armed with a hose and an extinguisher.

Related reading: What the roguelike tells us about the human condition.

As with any roguelike, each new level features rooms and a completely randomised layout to work through. The firefighter can move onto the next level by clearing all the fires from each room, using the combination of their hose and extinguisher. The hose is useful for putting out all types of fires, while the extinguisher is specialised and used to put out electrical fires. It might seem simple at first, but it’s relentless unless you know what you’re doing.

The fire is what makes Flame Over so engaging, and adds to the randomisation of the roguelike. Fire acts differently depending on what it is being lit on. If a carpet catches fire, it spreads rapidly. If any electrical device is on fire, it will continually spawn fire until it is extinguished. Electrical fires can be turned off by switching off the fuse box, but normally it’s hidden far into the labyrinth of rooms laid out before the firefighter. It’s these random elements that surprisingly adds a significant amount strategy to what is seemingly basic gameplay. 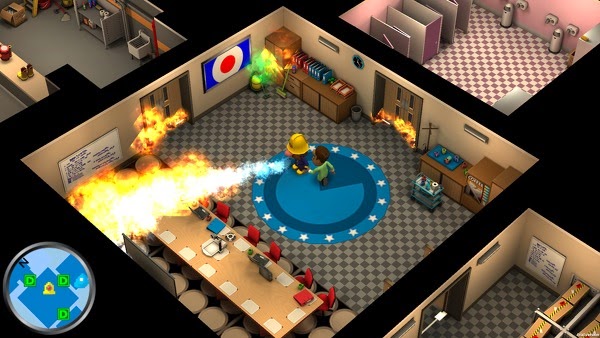 Initially, you have only five minutes to clear a level. You get more time by rescuing people who are trapped inside. You can also gain more time by collecting items for missions. They’re not too taxing, as the game tells you what you need and normally where to find it, but it creates a tension between spending your time putting out fires, and completing quests. These rewards are used to upgrade the firefighter’s equipment. You can invest in being able to revive fallen civilians, or improve the hose’s refill times. These upgrades are permanent so as you play more, the fireman will get stronger. Players also collect coins from the fires they put out. By delving deeper into the inferno, the firefighter will encounter a shopkeeper, and there they can buy upgrades that will help them out. These purchases however, do not carry over from one mission to the next.

Flame Over is also relentless when it comes to death, as you might expect from a roguelike. The firefighter initially begins with three hearts. Walking into a room with fire close by, will start to cause damage, as indicated by a circle icon, slowly filling up. If the circle fills up, the firefighter lose a heart, with the only way to stop the circle from growing is to either put the fire out or walk away. The dynamic fire, which can launch fireballs or walls of fire at the firefighter, can also add to this bar. If a fire gets out of hand, death comes quickly. To top it all off, if the firefighter doesn’t manage to make it to the exit before the timer runs out, a grim reaper will start the hunt. One touch from him, and it’s game over. In the initial stages of a game, death might not seem like that much of a setback, but on later stages it’s brutal.

Flame Over is refreshing. It has a clever twist on the roguelike by introducing the fire as the primary enemy, that is by far the most engaging aspect of the game. It feels real, it spreads, it’s alive. The first few stages do get repetitive, and it isn’t long before you start seeing the same rooms, as is standard for the genre, but it’s well worth the adventure.