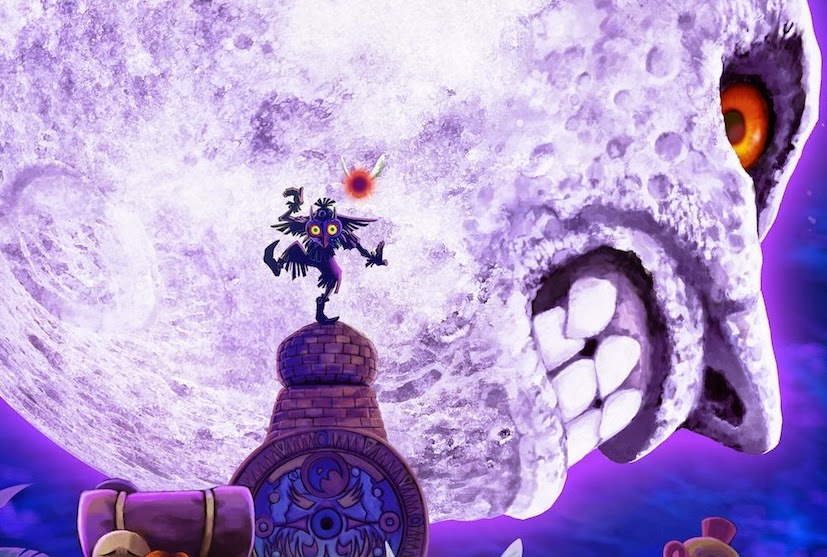 There are a lot of similarities between The Crow, a film about a man unable to come to terms with his own death, and The Legend of Zelda: Majora’s Mask, a game that is an analogy for the stages of grief. The Crow’s protagonist wears a mask to both conceal his inhuman nature, and Majora’s Mask Link wears masks to literally turn himself into other being, and thus conceal and resist his own nature. The Crow was a story of a search for meaning, as the masked protagonist hunted for the source of his fiancee’s murder. Majora’s Mask is a quest in which Link is looking for lost companions dear to him.

Down a rabbit hole Link goes, a secondary analogy to how Alice began her vision quest in Alice in Wonderland, and finds himself in a world that is doomed to annihilation in just three days. A moon, summoned by a dark power, is descending on the planet, coming ever closer as the days count by, and slowly the earthquakes from the moon’s gravitational power gather in strength as the moon grows in size until it is dominating the entire skyline. It is an abject terror in it inevitability. 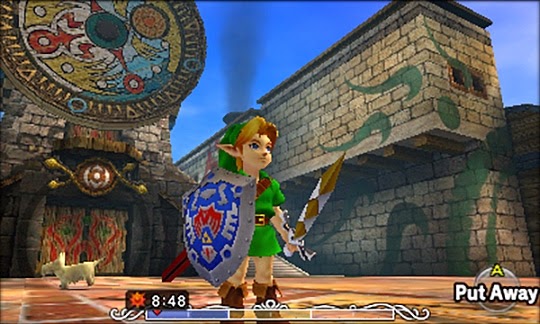 Following on from the grand adventure that was Ocarina of Time, Majora’s Mask was something entirely different. It wasn’t just darker, it was outright dark. There’s an incredibly deep explanation on how the game works as an analogy for the five stages of grief, so I’ll refrain from covering that ground again and simply link you over to it (warning: major spoilers in there), but the fear, the melancholy, and the overwhelming sensation of loss taints everything that happens in this adventure. The narrative juxtaposes with a muted, but still colourful overworld, and breathtaking soundtrack, and the 3D that the 3DS version brings to the table emphasises the simplistic beauty of Nintendo’s vision even more.

But what I find more fascinating about this game than anything else is just how different my response to it is now than when I played it on the Nintendo 64 for the first time. When I was a child playing this for the first time I didn’t especially enjoy it, despite never quite understanding why. Now in my old age (well, relatively old age), I understand why the game didn’t resonate with me – it’s simply not a game for children. Majora’s Mask is daring and brave, and it demands a lot from its players. In what was really a first for the series Majora’s Mask wants to be analysed, like a piece of literature or a fine film. Simply kicking back and playing it, while enjoyable, is not what this game is about.

Central to the game’s theme is the concept of time repeating. There are only three in-game days of play in Majora’s Mask, but Link can play a certain musical score on his ocarina to be taken back in time to the start of the first day. In those three days the people around him will go through the same routines, fearful of the moon looming closer, but never quite aware of just how doomed they really are. This repetition fulfils two roles – firstly, it holds thematic importance. The repetition represents Links’ denial of death. His inability to accept loss and his desire to persist at a time in which he is able to search for his lost loved ones, as opposed to accepting the reality, is a poignant, challenging theme to come to grips with. But the time mechanic also provides a nifty gameplay mechanic, whereby puzzles will require players to be in specific places at specific times, and learn the movements of important characters so that they can press onwards. With the ticking time bomb moon approaching rapidly, there’s never enough time to sit back and properly explore the dense and interesting world when focused on a quest, but with the ability to reset time, it’s possible spend a couple of 3-day cycles to indulge in a bit of tourism.

The world of Majora’s Mask isn’t huge, to facilitate movement around it given the limited time you’ve got. As a consequence there’s a certain claustrophobia in exploring the world that is also entirely appropriate to the game’s themes. Lost in his melancholia of loss, Link’s world turns in him, trapping him completely like a prison.

That said, as small as the world is, it’s one that is filled with things to do. There’s a central city, and then four regions that extend off like the points of a compass, and these regions cover off the standard tropes that you’d expect for a Zelda game – there’s the domain of the Zoras, the Gorons, and so on. These people are all desperate in their own manners, further enhancing the dark, sharp edge of the game. These regions also hold the game’s dungeons, which follow the traditional Zelda formula closely, complete with challenging puzzles to overcome. These dungeons can be intense experiences, though series veterans will likely not find themselves too lost. Those that have worked through Ocarina of Time, especially, will find dungeon layouts and enemy weaknesses comfortable. And of course anyone who has played Majora’s Mask on the Nintendo 64vbefore will be instantly familiar with what they need to do. 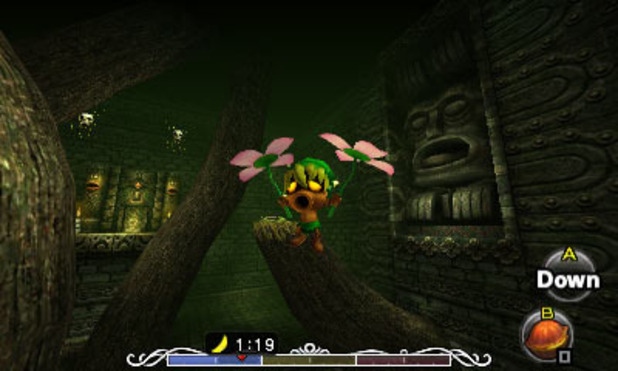 It’s the narrative risks that Nintendo has taken that are most appealing (and most challenging and stimulating), and it’s that spellbinding narrative that makes the game worth a re-purchase. Nintendo did away with the idea of a Princess Zelda needing rescuing in this tale, and it’s the stronger for it. More introverted than other Zelda stories, Majora’s Mask is all about the character of Link. And, remembering that Link doesn’t have a voice because the developer wanted players to impart their own personalities on to the game, this was a game where Nintendo had the unique opportunity to challenge the player on a deeper, moral, ethical and philosophical level.

It’s telling that the great “villain” of Majora’s Mask is nothing like the caricature of evil that Ganondorf. Without giving away the narrative for those that haven’t played the game yet, the Skull Kid of Majora’s Mask is vulnerable, and in many ways an innocent. Corrupted as he is, we are asked to sympathise with him, even as we work against him. It’s a simple way to stick a mirror in front of our own moral compass, and while Nintendo has made it clear that the Skull Kid must be stopped (thus saving us from any conflict in actually fighting against him), there’s nuance to the character that demands a more careful eye than in any Zelda game before, and most of them since.

Related reading: This was one of the games Nintendo used to launch its New Nintendo 3DS console. You can read our review of that console here.

That maturity towards the character of the Skull Kid is in itself telling. With Majora’s Mask, Nintendo’s premier franchise was no longer childlike in innocence. Having addressed the core themes that sit around death, and the inevitability of it, the series transitioned into a place darker and more knowing. Subsequent releases have either paled in comparison to the revelations of Majora’s Mask, or represented a nostalgia for the “good old times” of innocent adventuring. In other words, The Legend of Zelda series has become the incarnation of an adult, and for better or worse, Majora’s Mask is the coming of age story that made us all grow up.

In other words, Majora’s Mask was Nintendo’s way of giving the franchise – and by extension its fans – a snow globe depicting a cemetery scene.