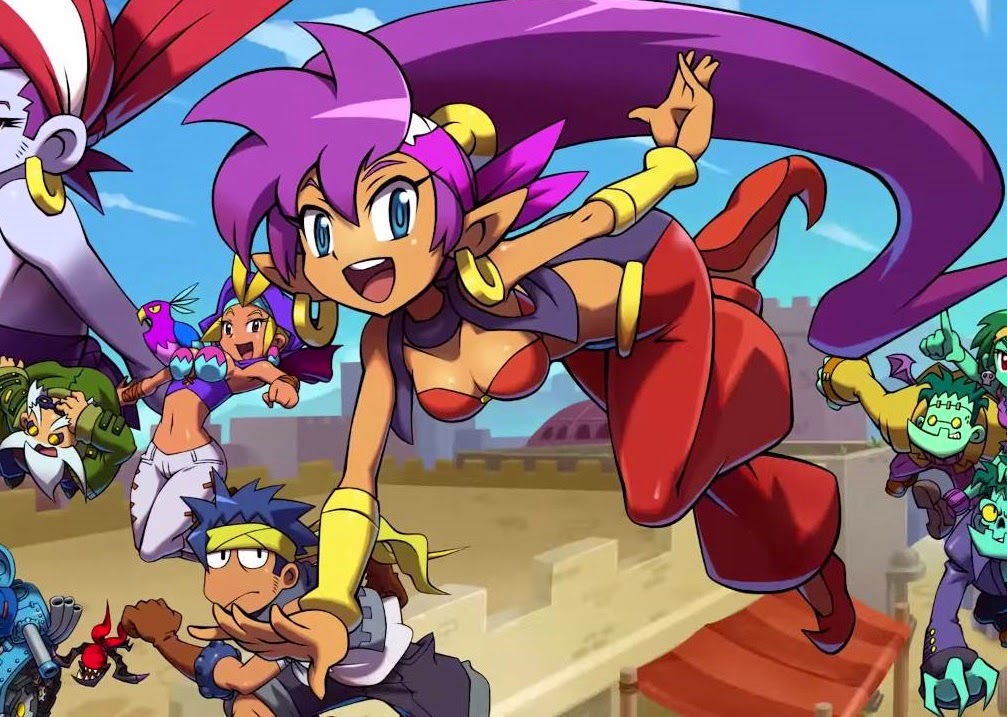 WayForward’s Shantae has been for many years a hidden gem for people to uncover. The original on the Game Boy Color was a title that ended up with limited distribution, and then the sequel was a release on the DSiWare platform (hardly a huge success) and then ported to iOS and PC. But there has never been a console Shantae title, and for a 2D platformer, this is odd.

That’s been rectified now. The third Shantae release, Pirate’s Curse, is finally available in Europe and Australia, on both the Nintendo Wii U and the very much more popular than DSiWare 3DS eShop. Sadly, first impressions of the game on the big screen are disappointing. 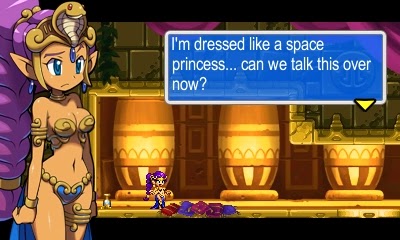 Allow me to explain. WayForward is a company that understands how aesthetics work on 2D platformers better than any other developer out there. Yes, even Nintendo itself. Games like Bloodrayne and the Ducktales Remastered remake demonstrate pristine sprite work, lush backgrounds and an intensity to the art that can very easily distract you away from the actual game. Shantae should have been the same, because here WayForward had an exotic fantasy Arabian setting to work with, and I was quite literally jumping with anticipation to see that vision realised with the same graphical fidelity of Duck Tales. Sadly, Pirate’s Curse instead looks like a deliberate homage to SNES games. It’s highly pixelated, and while it’s beautiful in terms of that aesthetic context, I am disappointed nonetheless that a “HD” Shantae is still not a thing. Character portraits during dialogue sequences are “HD” and highly detailed, and these act like a tease of what could have been. Unfortunately as it stands they clash quite glaringly with the in-game action.

Related reading; Wayforward also builds entertaining games away from the platformer genre, such as Silent Hill: Book of Memories on the PlayStation Vita.

Still, WayForward have crammed a lot of personality into the game’s design. When Shantae crouches down, for example, she wriggles like a kitten about to pounce, and while the foreground and background don’t have a lot going on in terms of activity (I presume because on the smaller screen that this was originally designed for animated backgrounds would have been confusing), there is a lot of variety between levels, and so repetition never sets in. Shantae and the Pirate’s Curse isn’t a long game, but it’s a game that wisely understands that by giving players a constant sense of wonder and discovery that they’re going to feel like they got their money’s worth.

And, despite the art direction, Shantae games have always been effective in capturing the exotic appeal of one of the most underdone settings in video games, and Pirate’s Curse is no different. I’m not entirely sure why fantasy Arabia isn’t a setting that is used more often in games because 1001 Arabian Nights (the book that inspires just about every fantasy Arabian story) has everything; it’s high on action, magic, sensuality (if not outright eroticism) and drama. And yet the occasional notable attempt aside (Prince of Persia), it’s a rare game (or film, book and so on) that makes use of that setting. I suspect without being able to prove anything that there’s a certain bigotry both among many developers and the community against the setting as a consequence of the ongoing political dramas in the real-world Middle East. And if that’s the case it would generally make poor business sense to use fantasy Arabia as a setting, and I find that to be a sad loss to us all. But, regardless, we have Shantae, and from the music to the vibrant, exotic colours, this game does the setting justice. 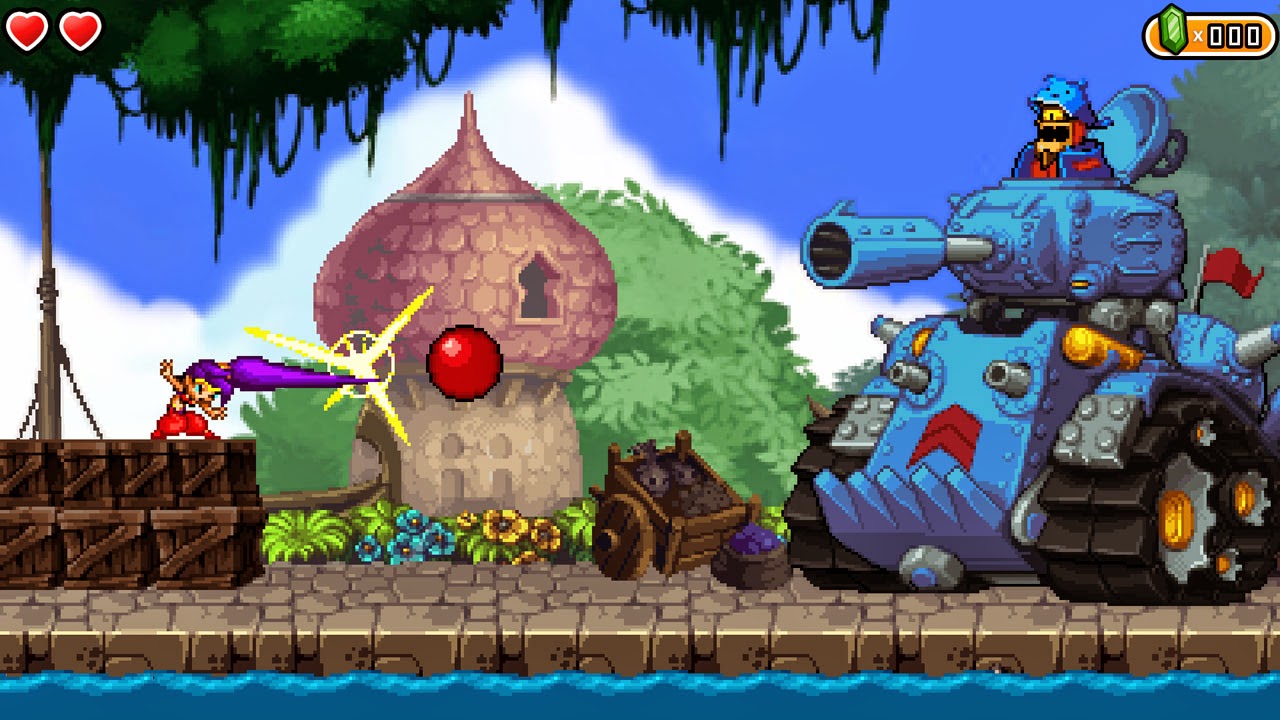 As a platformer Shantae is much more open ended than the “move left to right and reach the goal,” of many of its contemporaries. It’s not entirely a “Metroidvania” either, but Shantae does need to explore the environment vertically as well as horizontally, and does need to solve numerous puzzles along the way. And, yes, there are some areas that are initially locked off until Shantae acquires an ability or item that allows her to access them, but the game resists using this to the same extent as Metroid or modern Castlevania games do.

The puzzles themselves are generally quite simple in design and obvious to solve, but they are also creative (and often humorous) and do a good job of breaking up the platforming (which can be surprisingly difficult at times), and combat. In terms of enemies, there is a great range of common beasties to take down, and WayForward has worked a number of subtle homages into the level design for fans of retro platforming – for example the opening sequence of the “isle of the dead” level is a very clever nod to the classic Castlevania and Ghosts & Goblins openings where you’d be whipping your way through an unending series of spawning zombies. It’s the bosses that show the most creative work, however, and while none of them will blow you away with their originality if you’ve played many platformers, they’re multi-tiered affairs that should challenge most players.

The game also makes decent use of the Wii U Gamepad, which is notable because it’s rare for a third party developer to bother doing much more than replicating the TV screen on the Gamepad screen. Here you’d able to access Shantae’s inventory on the fly and keep an eye on the map, which can be handy in looking for unexplored areas. It can be a little bit of a pain trying to select and use a potion from the inventory in the heat of battle, but the tradeoff is worth it, as it means no pausing of the action and nothing cluttering the main screen’s interface. 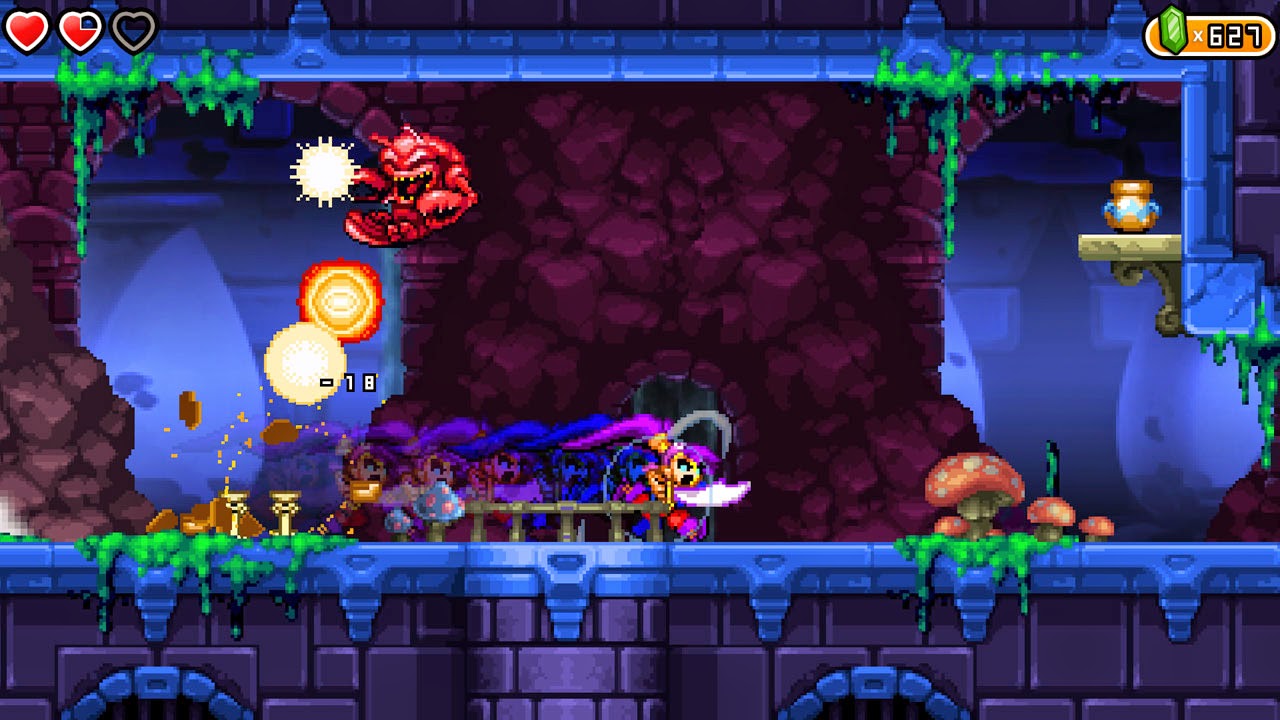 But what impressed me most about Shantae and the Pirate’s Curse is its sense of humour. Without weighing the game down with excess dialogue (it is, after all, a platformer), Shantae and the various people she meets along the way are all capable of throwing out the quips at rapidfire pace, and it lends the game a charming, hugely entertaining personality. Some of the jokes do rely on you having played through the previous two games, but if this is your first Shantae game then don’t be too put off – you’re still going to be able to follow the narrative and have a good time while you’re at it.

Related reading: The platformer is one genre the Wii U is not lacking for. For the blockbuster alternative, consider Donkey Kong Country Returns; Tropical Freeze.

I hope WayForward gets around to making a Shantae title that’s designed with the big console experience in mind first and foremost. Three games in now and we’ve got a franchsie with real personality and a great character in Shantae – now it’s time to really let her, and the impressive world WayForward has built around her, really shine.

Yet another good-looking Warhammer game announced