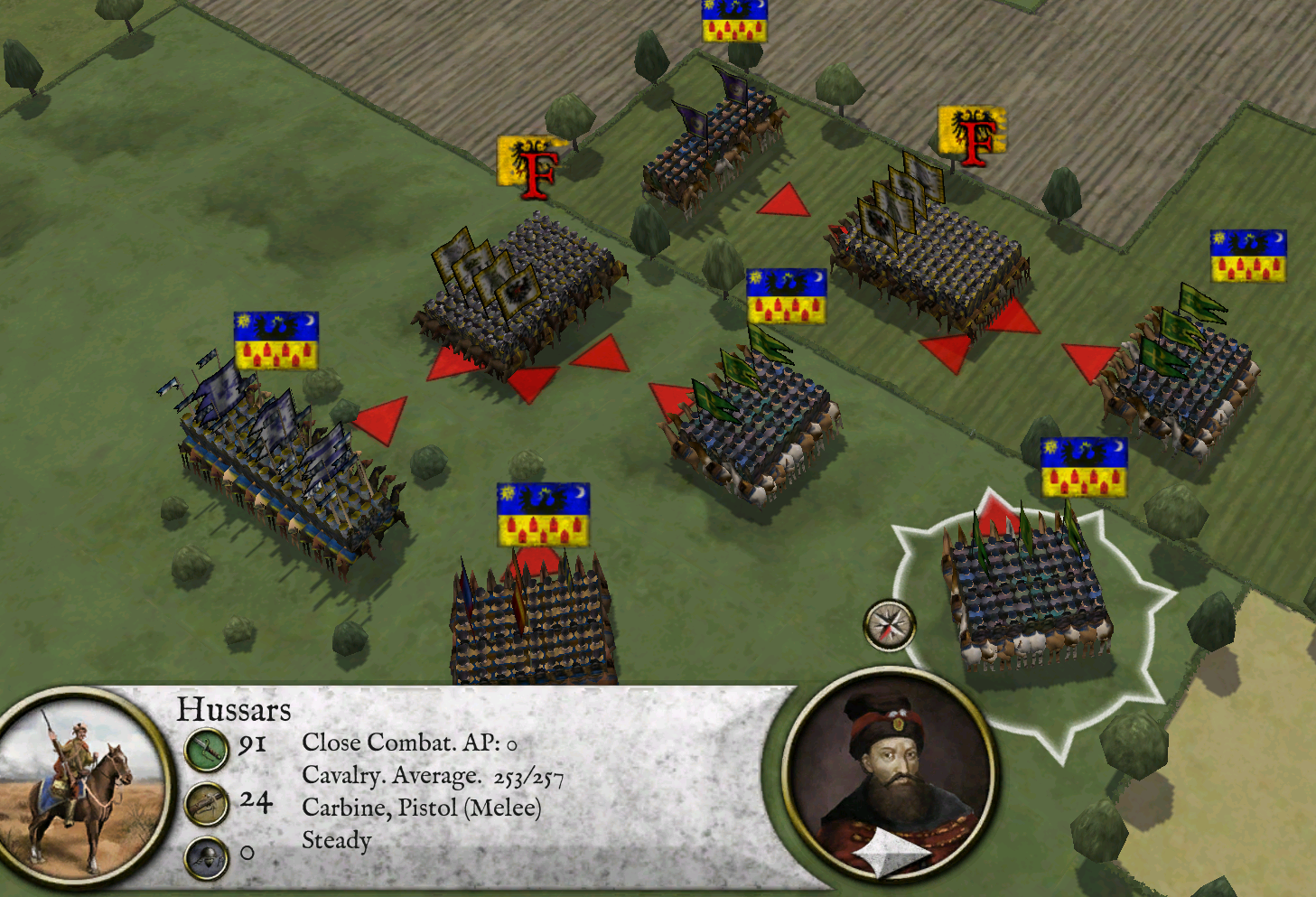 Too many modern strategy games are focused on the World Wars or, if we’re lucky, a couple of centuries previous to that, such as the Napoleonic era. Occasionally we get a big leap backwards in time to ancient wars, but that’s becoming a rare event.

How many strategy games have you played that focused on the 30 Years War, the Italian Wars, or the English Civil War? Not many, is the answer. Thankfully, that’s changed now that Pike & Shot is here, and it’s a good effort from Byzantine Games, The Lordz Game Studio and publisher, Slitherine.

Pike & Shot refers to an infantry formation that dominated warfare in that period (around 1494 through to 1651). As the name of the formation suggests, it was a mixture of pikemen and soldiers carrying shots (early firearms). At the time it was the best of both worlds – it combined the offensive capabilities of firearms (which by this point had replaced bows & arrows in terms of both reliability and power) and the defensive capabilities of the pike. Those pikemen were very important because the other units that were in vogue at the time were cavalry, and if an army was stupid enough to put a shot unit on the field without the pikes to scare the knights away, the guarantee was that they would get trampled. Oddly enough this unit construction had the effect of limiting the variety of units that would be fielded on the battlefield to an extent. Infantry without gunmen essentially disappeared, and gunmen without pikes were relegated to a light skirmisher role. Sure you had units of veterans that were more effective than units of recruits, and over in the cavalry there was still a mix of melee specialist units (mostly used for taking out other units of cavalry now that all the infantry units came armed with horse poking sticks), and fast skirmishing gunmen doing the early era equivalent of driveby shootings. And you can’t forget the impact that early cannons had in adding artillery firepower to the mix, but Pike & Shot’s greatest limitation is that in keeping with historical authenticity, there are relatively few unit types to play with.

Related reading: Another great Slitherine game to consider on iPad is Panzer Corps.

Once you get over that however you’re in for a good strategic time. Using what seems to be a modification of the Battle Academy engine, players manoeuver units around a grid of squares, looking to make use of hills, forests and the occasional village as they try to out flank one another. Units are rarely destroyed outright – instead the goal is to destabilise a unit’s morale (hitting it in the flank or rear while engaged in combat with another one of your units is a good way to achieve this), and then make it rout. Infantry can take position behind field fortifications, which makes it all but impossible to dislodge by firing at them, but having a cavalry unit come around from behind is a sure fire way to scare them out of the picture.

Even the smallest battles can involve a dozen units on each side, but it’s the largest conflicts where things get really exciting. Watching a carefully laid-out plan come to fruition across a wide, deep battlefield is an enjoyable process – my personal favourite trick is to have a solid core of infantry, and then stack one flank with cavalry to quickly overrun one side of the opponent’s forces, before then moving on the the opponent’s exposed flank. Sadly, the game’s AI is relatively simple to outsmart, behaving in a very uninspired manner if not walking into to obvious traps on most of the difficulty levels. On the higher difficulty levels enemy forces are less passive, but I still found it relatively easy to trick them into doing things that a reasonably strategic human opponent wouldn’t fall for. This surprised me as I’m used to a greater depth of AI from Slitherine-published games, however there is a robust online community supporting the game, and most of these people are strategy game veterans thanks to the niche nature of the game, meaning you’re not going to have any trouble challenging yourself if you’d like to. As with most Slitherine games it’s a strictly play-by-mail scenario where you’ll take a turn and then wait patiently for your opponent to log in and take his/ her turn. It means a typical game will run over days, if not weeks, but it’s the best format for a methodical think-em-up like this.

There’s plenty of single player content to work through, with full campaigns for all three military eras most associated with the pike & shot formation – the Italian Wars, the 30 Years War and the English Civil War. Additionally, there’s a random scenario option that allows you to set up randomised maps and select your own forces to take into battle. However, there’s no map editor as you’ll find in the PC game, and this is really disappointing.

What is also disappointing is the generally uninspiring visual style. Slitherine-published games are never Total War as they come from smaller developer teams who are more focused on the mechanics, AI, and historical authenticity than making everything pretty, but Battle Academy showed that these kinds of strategy games can still look visually appealing. In Pike & Shot units are blocks of fuzzy colour that more-or-less slide across the battlefield. Not only is it difficult to distinguish a unit of veterans from raw recruits at times (want to know what can really mess up your strategy? Accidently relying on the morale of recruits to hold down a core position), but it means the game struggles to get the player connected with it. Pike & Shot is a cold, almost soulless game, and while that doesn’t hurt the fundamental strategy on offer, this is a premium-priced iPad game and I do think there should have been a more pleasing representation of units on the battlefield. 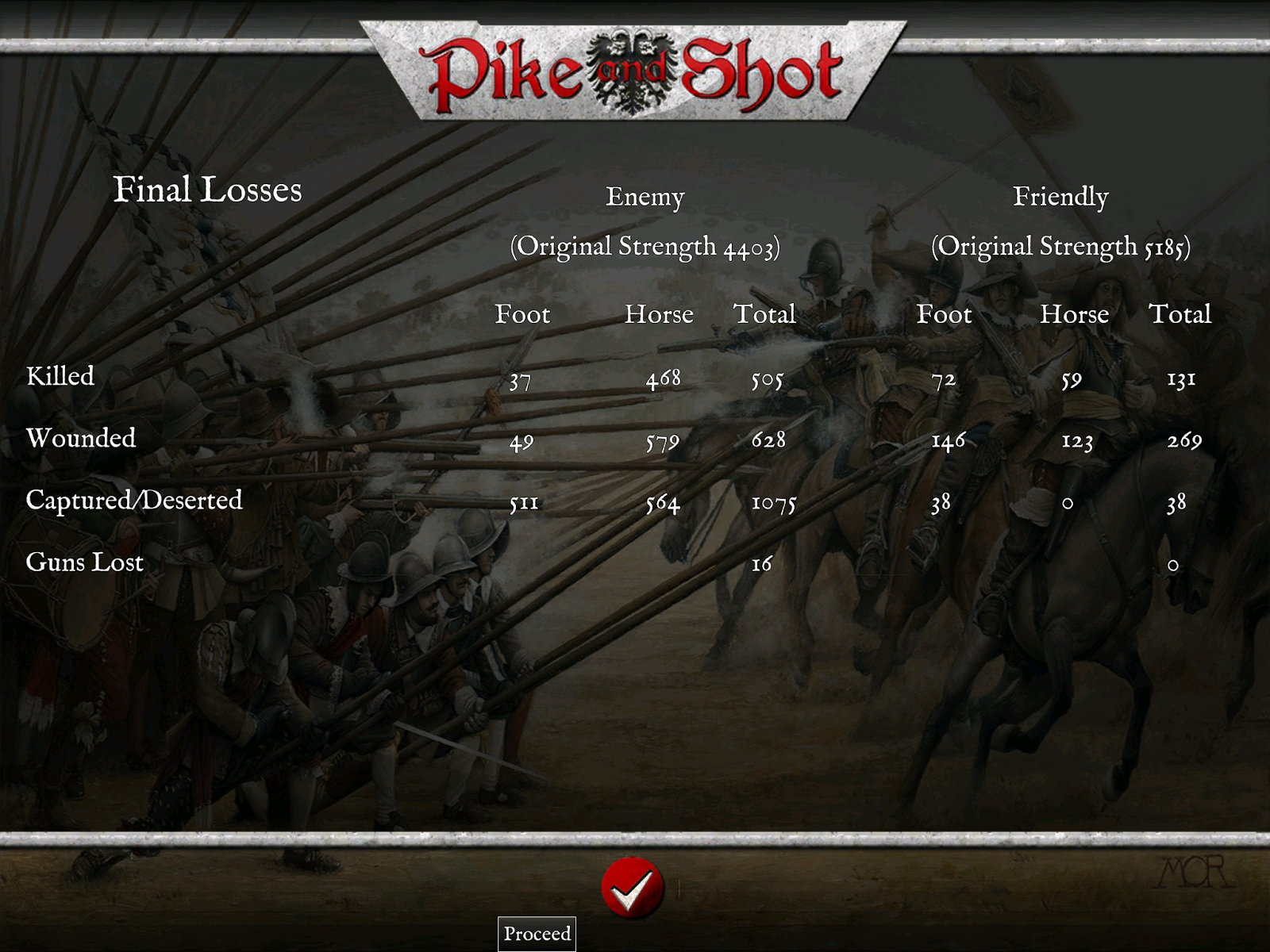 Still, those superficial elements aside, Pike & Shot is a rock-solid simulation of an era of military conflict that is ignored by most developers and publishers. Military strategy fans will get a kick out of the historical authenticity, and while it’s not the most accessible of wargames out there, I still recommend people with a passing interest in the genre give it a whirl thanks to its depth of content and excellent ruleset.

Related reading: If, however, you are in the mood for a World War strategy game on your iPad, Slitherine has an excellent one in Commander: The Great War.

Oh, and you’re able to play as the Transylvanian armies for the era. Now I know there’s no vampires in those pike & shot formations, but that’s just plain cool.