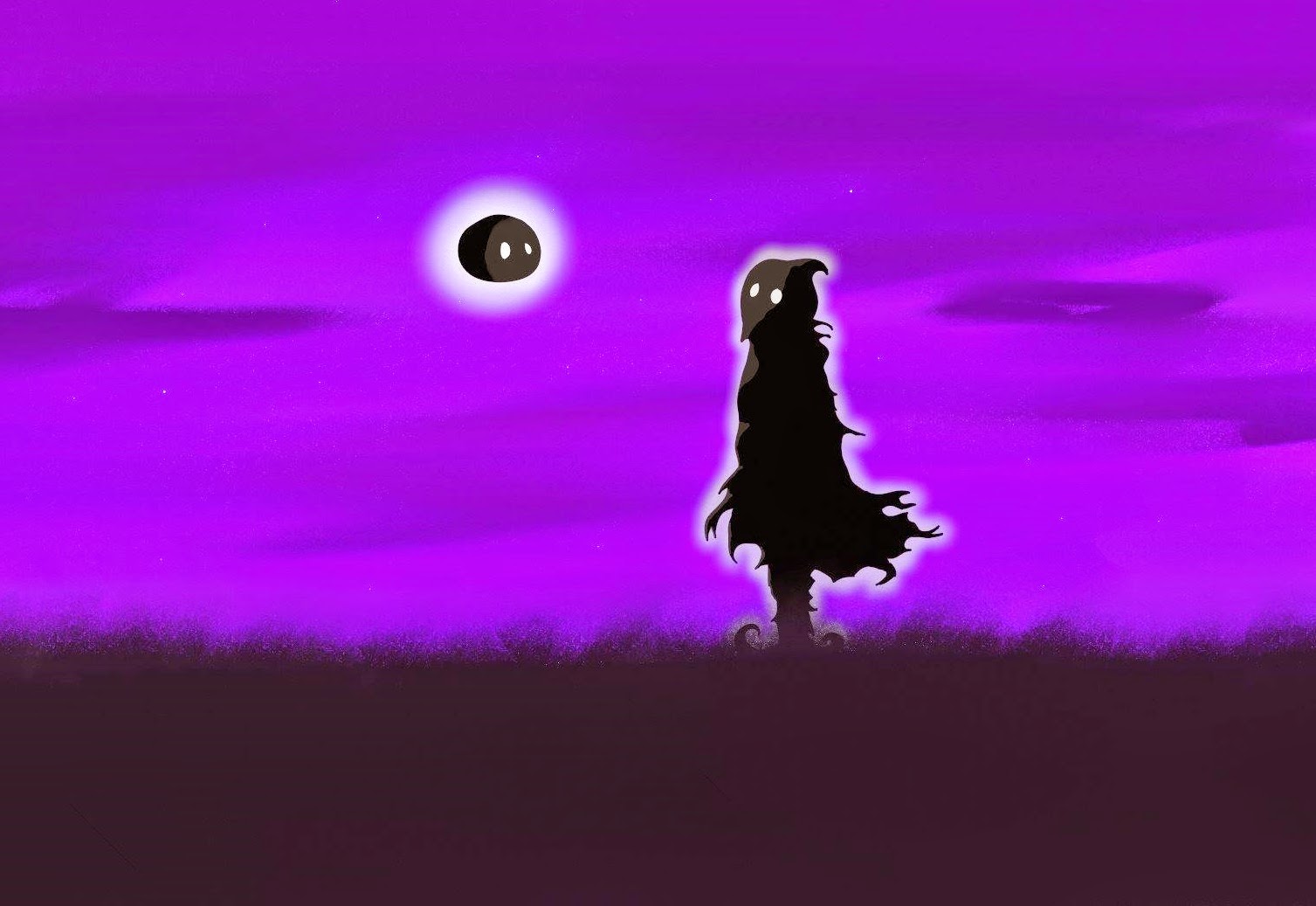 Nihilumbra is a strange mix between a puzzle platformer and a narrative storybook. You play a Born, a shadow that has somehow escaped from the Void (which is what it sounds like). One a part of the Void, you move the world painting it in colours all while trying to escape the same thing that you were created from, that is trying to reclaim you. The forest, the desert, the volcano are all part of your canvas. Yet as you move through the world, leaving behind your mark, the void that you escaped from follows you, swallowing the world you strive you be a part of. As you live, everything around you dies.

Nihilumbra in itself isn’t that challenging and it relies on colours to progress through the levels. These colours, when painted onto the world, changes how you react when you walk over it. Using blue creates slick ice paths, that speed yourself up so you can jump further distances. Where brown acts as a type of glue, which either allows you to sneak or cling onto walls and ceilings. Ample direction is given to ensure the player knows how to use the colours well together to make solving puzzles as fluid as possible. Like any good puzzle game, the mechanics are slowly introduced over time. At first you’re working with one colour at a time, but by the final levels, you can seamlessly switch between colours. 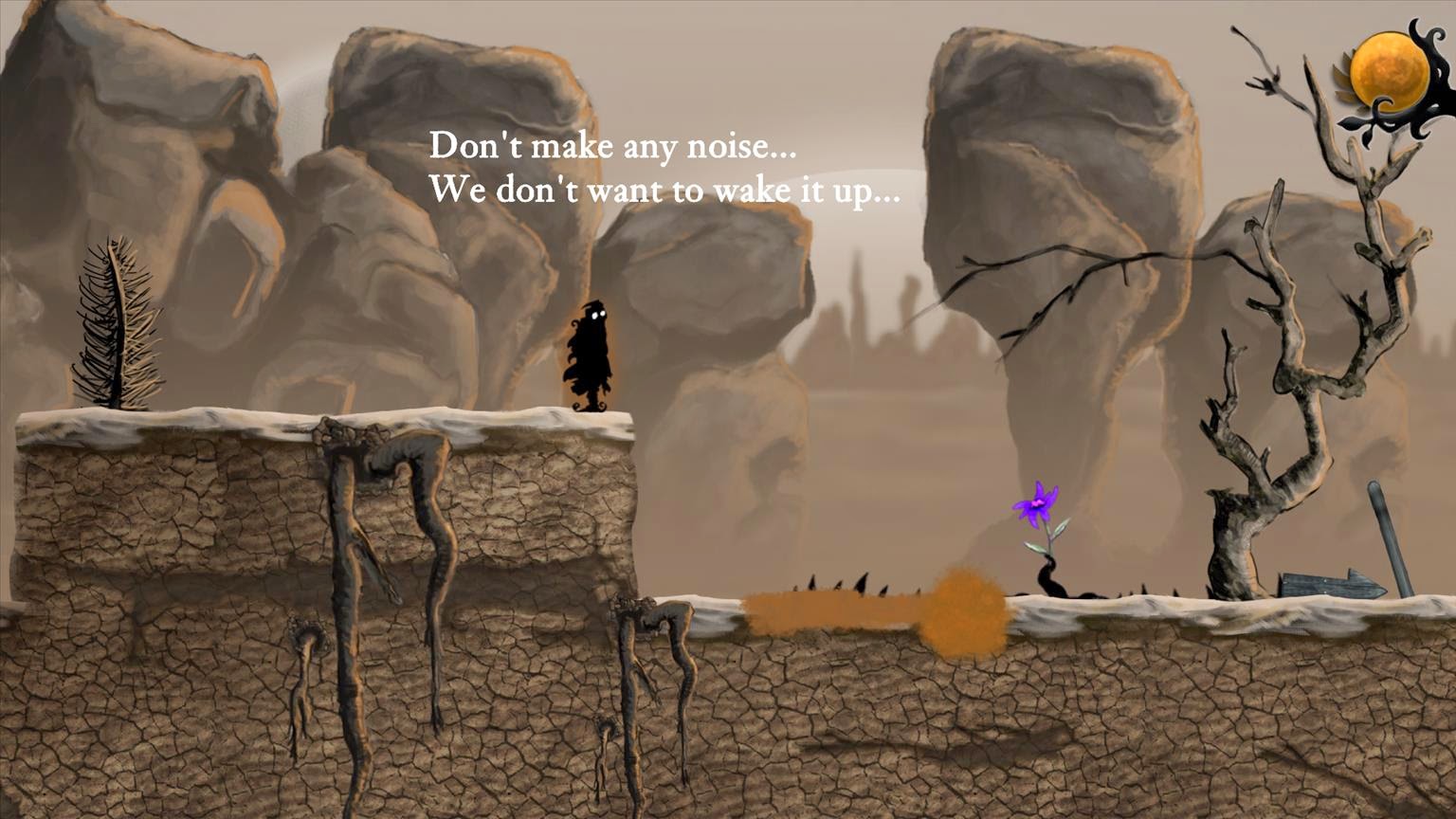 As you move through the world, escaping the void and acquiring different powers, your omnipresent narrator asks the question, “What’s the point of living if you’re going to die in the end? Does it have any real purpose?” As the game’s title suggests, Nihilumbra takes a great deal of inspiration from a very casual understanding of nihilist philosophy. You’re not going to come away with any great insights of Nichetze and other nihilists, but it’s always nice to see philosophy at least represented in games.

It was at this point where Nihilumbra started to grow to be something much larger than another puzzle platformer. Although it’s simple by the standards of nihilist philosophy, there is nevertheless a very deep conversation that is occurring while you’re playing, with the inevitability of death being the central theme. Early on in the game, Born is given the chance to assume the form of a scarecrow. Born keeps this form for the rest of the game, and it acts as a beautiful, yet haunting motif. Born passes through these untouched worlds, only to ultimately destroy them. Born never encounters any other beings that aren’t trying to pull him back to the void. He is isolated until the final world, the city, where he travels through a ransacked, abandoned cityscape. Who has been here before? Had the previous occupants had the same idea that everyone else must die so that I can live? It’s briefly brought up through the narration, but the meaning behind it all is brought out through the beautiful artistic backdrops let the game employs. The landscape looks like they are watercolour drawings, drawings that people have poured their souls into, only to be sucked up in the void that is chasing after Born. Remember, as you live, everything else dies. Once the game is complete, Nihilumbra allows players to revisit all the worlds in Void mode. Void mode acts as the challenge mode, with every level requiring players to use everything that have learnt, in incredibly difficult situations. It’s a far cry from the simple puzzle nature of the normal game. Sadly where the Vita version falls short, is the handheld itself is too big to accommodate the multiple control methods. Having to juggle between using the d-pad, touchscreen and the face buttons results in lost time regaining your bearings, which for the speed of this game makes it all the more difficult to succeed. While it is not as noticeable in the more sedate story mode, Void Mode becomes more a test of speed and memory, rather than one of critical thinking.

Nihilumbra plays with the duality of life and death. I believe it’s more focused on making the player try to connect with the character and understand this relationship, rather than focusing on the puzzles and the gameplay. Yet the post-game content more than makes up for this, as the gameplay is allowed to take centre stage and show the strengths of the developers and that they know how to put well though out puzzles together. Nihilumbra is a game that really anybody can enjoy, it’s just a shame that they hid the difficult levels behind the story mode. That being said, it’s worth a play through for the narrative alone; a strong, and somewhat emotional reflection on the player and how they exist within their own world.

Enjoyed The Banner Saga? Check out the Aussie-made Tahira: Echoes of the Astral Empire on Kickstarter!