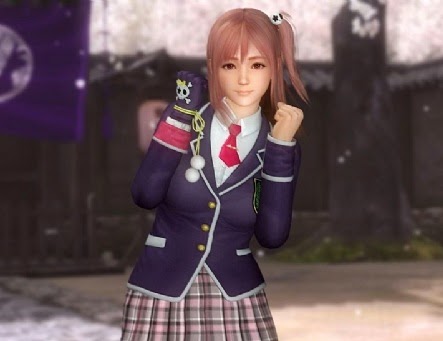 Koei Tecmo is going out of its way to try and convince fans of Dead or Alive 5 that the next-gen upgrade is worth the price of admission (and it’s succeeded, as far as we’re concerned). The latest addition to the ever-growing Dead or Alive 5 roster is a new face, and she promises to add some new moves and strategies into the mix.

The girl’s name is Honoka, and she fights with her own unique style, called “Honoka Fu.” Full description, according to Koei Tecmo’s press release, below:

Related Reading: My full hands-on impression of Dead or Alive 5: Last Round from Tokyo Game Show 2014

Having been raised all her life by her gentle and loving grandmother, Honoka is a sweet, easygoing kind of girl… but when she sees a fight, she cannot contain her excitement, or the mysterious power surging within her. Honoka has a strange knack for instantly learning any fighting move she sees. She has kept this power hush-hush, but has been itching to test it out in secret. Honoka studies her favorite moves from various sources and fighting styles, and combines them into a unique style which she calls “Honoka Fu”. Since her build is that of an average teenage girl, her moves, while skilled, may not always pack the same punch as the fighter she learned them from. In her Hissatsu-no-Kamae stance, however, she is imbued with an unbelievable strength and becomes capable of techniques she has never seen from any other fighter. In new next-gen screenshots released today, Honoka faces numerous adversaries in Brad Wong, Rachel and Leifang. Honoka demonstrates the power of her deadly Hissatsu-no-Kamae stance, as well as showing off some tag team action with Raidou. Each of these new screenshots show never before seen costumes and customizable hairstyles that will only be found in DEAD OR ALIVE 5 Last Round.

I got some good quality hands-on time with this game at the Tokyo Game Show last year (though obviously I wasn’t able to test Hanoka out), and the jump between generations has done a game that has this… focus… on the visual aesthetics a big favour. It’s actually been difficult going back to the PlayStation 3 game since. The good news is that we’ll be able to get stuck in to the final release (we assume) of Koei Tecmo’s most successful fighting game to date shortly – it releases on February 20.

In depth: The banning of Hotline Miami 2 and why games need to be able to offend