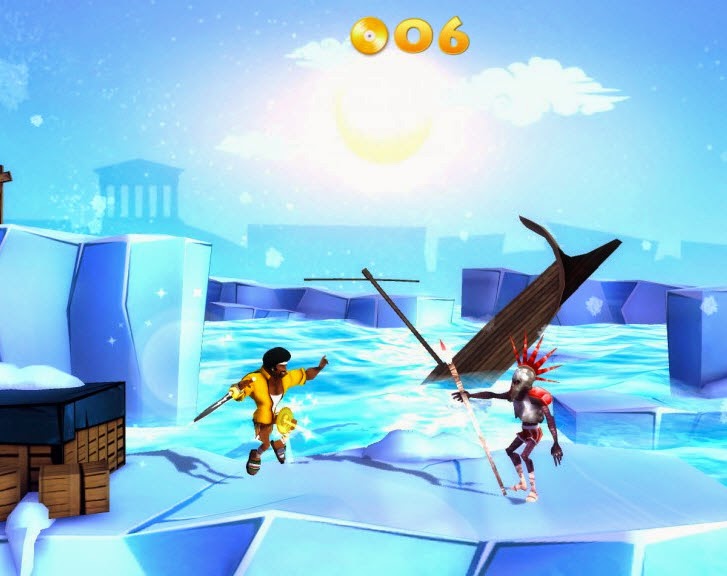 Funk of the Titans has some potential, from the wacky theme to some of the game’s ideas. The game is set against a mythological backdrop that is absurd and thoroughly entertaining as Zeus – the Father of Funk – wants to see competing genres of music driven from the world. That is where you, the afro styled wielder of Funk-Fu Perseus, comes in.

This is a platformer, and is a very simple one at that, making it an accessible game for almost any player. Unfortunately a lack of execution leaves Funk of the Titans unpolished and in the end, disappointing.

The primary gameplay revolves around continuous running. There is no exploration and no opportunity for Perseus to take his time and even soak in  his surroundings. This part is a shame, because the levels themselves generally look quite nice. They are set in a Grecian themed world of mythology that very much looks the part and makes the unique appearance of Perseus that much more amusing. 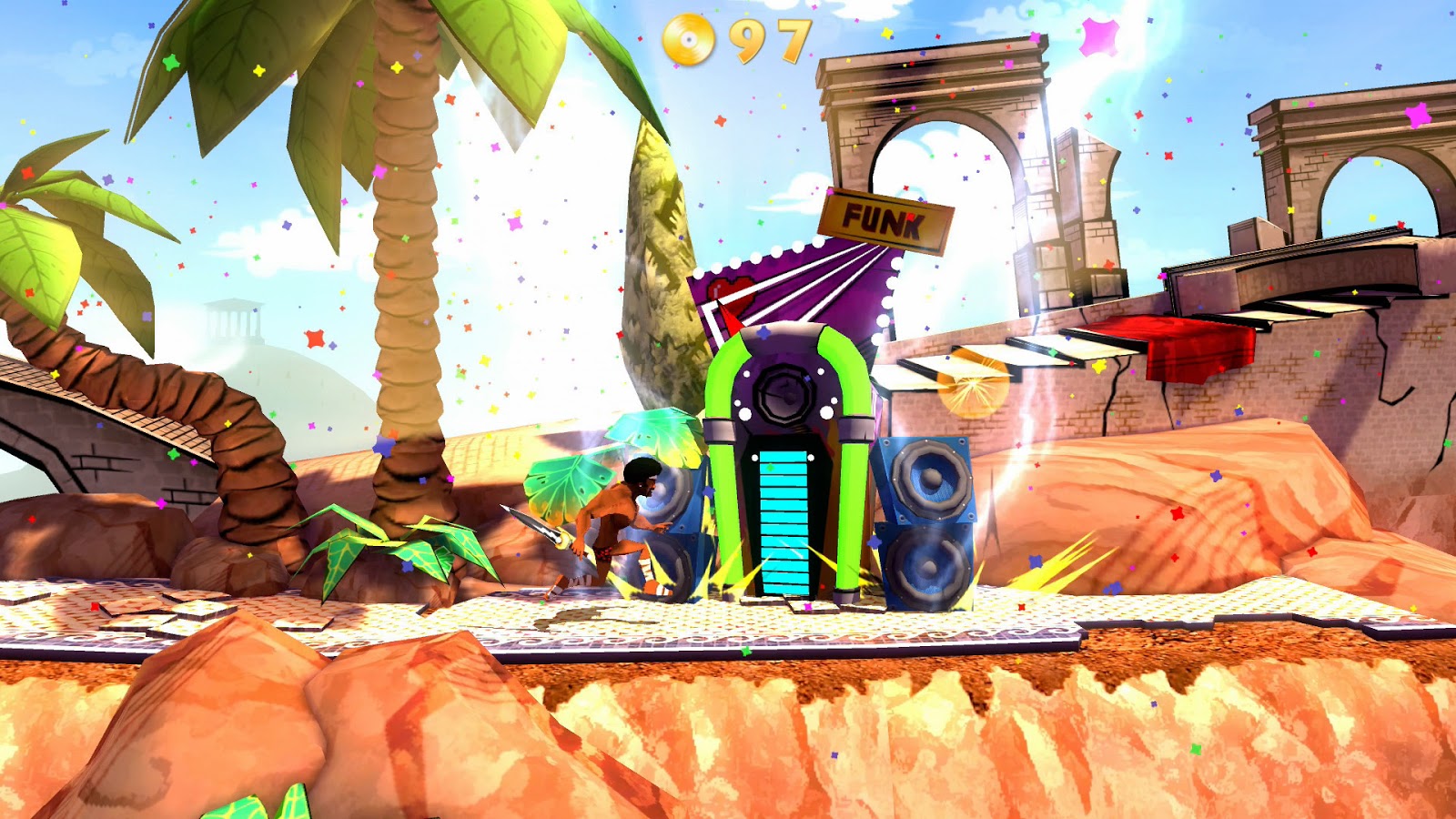 However, once you look past the visuals and the amusing premise, Funk of the Titans reveals itself as an overly repetitive title that missed an opportunity to take advantage of, you know, the funk. The game’s premise tasks players withh removing bosses that protect each of three magical, musical worlds. However, while the music through the three dozen levels is decent, it should have paid more respect to the genre that the world is meant to represent. Instead, the music during the levels is quite generic, and only during the boss fights do the pop, rock and hip-hop musical themes really get used. This is a shame since more diversity and thematically appropriate tracks on the general stages would have helped to match the game’s themes.

Related reading: Another runner that you might want to consider is Ranko Tsukigime’s Longest Day, from maverick developer, Goichi Suda

As for the game itself, while there are a good number of levels, they are not especially well designed. Furthermore, a bad penalty mechanic mucks everything up. Perseus can take two hits, but that first hit sends him bouncing backwards a little. The problem with this is it could actually land him in just as much (if not more) trouble than he was already in. Ideally Funk of the Titans should have adopted the momentary invincibility mechanic found in most other platforming or action games. Certainly this would make an already easy game even easier, but instead of relying on a bad mechanic to pad the play time, why not create better levels and back them with well-crafted mechanics?

As a runner game, Perseus is perpetually in motion and reminded me of the Bit.Trip platformers in execution. Where as jumping felt tied to the music there, here there is none of that going on. Again, it feels like Funk of the Titans could have done something more to make the experience more engaging my making use of the way that music and action can work together. 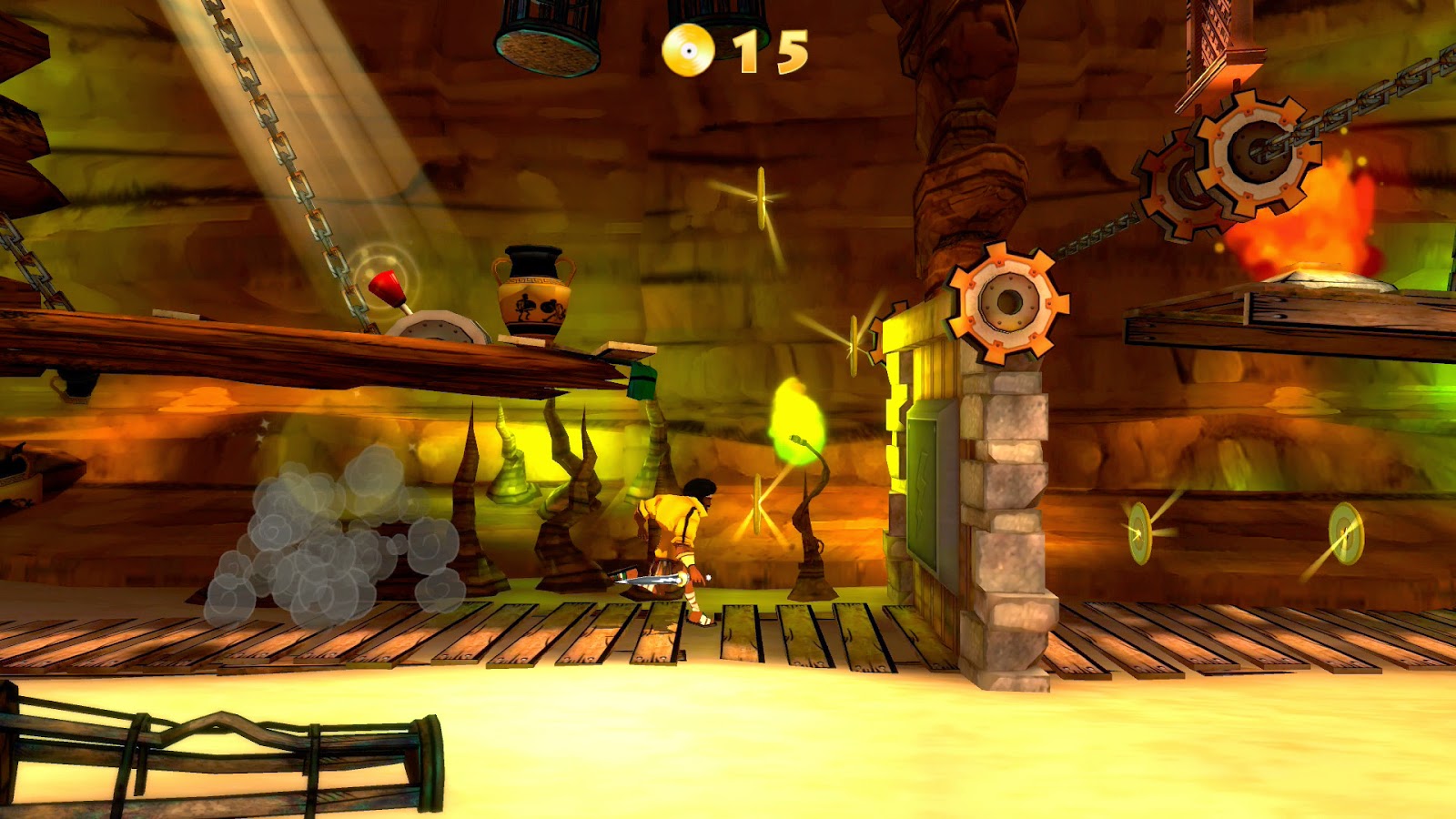 Later in the game the boss fights and final areas provide some more inspired level design, but by then it’s too little, too late. Funk of the Titans is not a long game, clocking in at about three hours or so. There are heroic missions that can unlock items that are mostly cosmetic, and they do provide a little extra meat for the experience, but not enough to justify going back and grinding these out.

Funk of the Titans disappointed me in a way that is oddly like how Akiba’s Trip disappointed me, of all games. In Akiba’s Trip, the premise was plenty ridiculous but the developers failed to embrace that insanity and take the game that played like its press release read. Funk of the Titans should have been more than what it has come out to be. While the runner platformer is fine and the visuals and story behind the game pleasant, the end result does not come together to create a cohesive experience worth investing your time into.

The Friday Ten; The ten last-gen games that should have “HD Remasters”