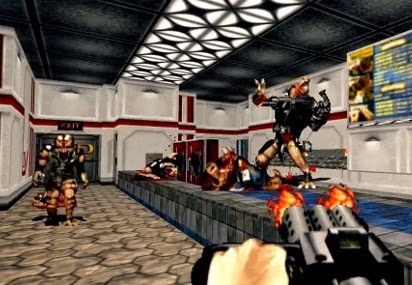 If there is one genre that ages more sharply than any other, it’s the First Person Shooter, or FPS. Whether it’s Wolfenstein 3D, Doom, Heretic, Hexen, or even the likes of Goldeneye, it’s harder and harder to go back to these games and enjoy them as games.

Duke Nukem 3D is much the same. Playing the game now through Megaton Edition, it’s easy to get nostalgic about what it achieved back in its day, but it’s equally difficult to enjoy it as a game.

Related reading: Gun Commando is a modern game that deliberately looks and plays like a retro FPS. It is also available on the PlayStation Vita.

What made Duke Nukem 3D awesome back in the day was its attitude. When this game was new the games industry was a different place – it was a relentlessly juvenile boy’s club and targeting the teenage male ego was the priority in order to see commercial success. Duke Nukem certainly did that, with a near-endless stream of toilet humour, and posters of big-breasted women adorning every wall so that the environments look like an extended teenage boy’s room. Duke growls through level after level with his unique brand of humour too. 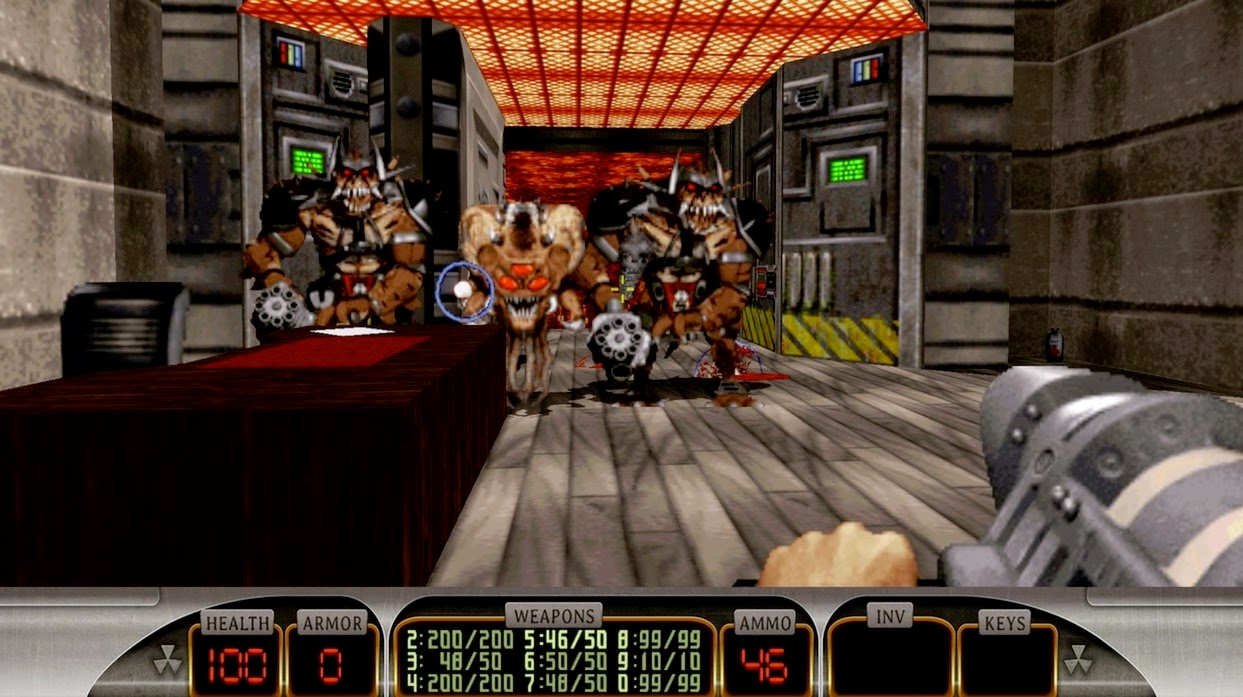 Credit where credit is due, back when Duke Nukem was new your character in the typical FPS didn’t have much of a personality. In an era of Doom Guy clones being in control of a character with actual personality was a neat novelty, and when the game was new I was too young to realise just how irritating Duke actually was. Now, though, I’m older and wiser and I’m not really a fan of Duke’s boy fantasy antics any longer. Additionally, don’t worry if you can’t remember the plot of Duke Nukem 3D beyond “aliens have invaded and Duke needs to shoot ’em” – you’re not going senile, because that is actually the plot of the thing.

In terms of gameplay, if you’ve somehow managed to avoid playing Duke Nukem 3D before, then it’s a standard run-and-gun corridor shooter. As with all FPS games of the era, each level in Duke Nukem includes plenty of hidden doors and treasure troves to find too, but otherwise it’s a linear point-A-to-point-B blast-a-thon.

With that being said, while I can’t remember if the original Duke Nukem 3D afforded you the ability to look independent of your movement, most of the later ports did, and this provides the game a significant advantage over some of the other games from its time period. In a game like Doom if you wanted to shift your aim, you had to physically move, and looking up and down was out of the question. But Duke Nukem 3D more closely resembles modern shooters in that you’re able to look up and around. This means that the level designers were able to introduce vertical elements to the level design, flying enemies and the like, and as a consequence the game is more varied and interesting than some of its contemporaries were. 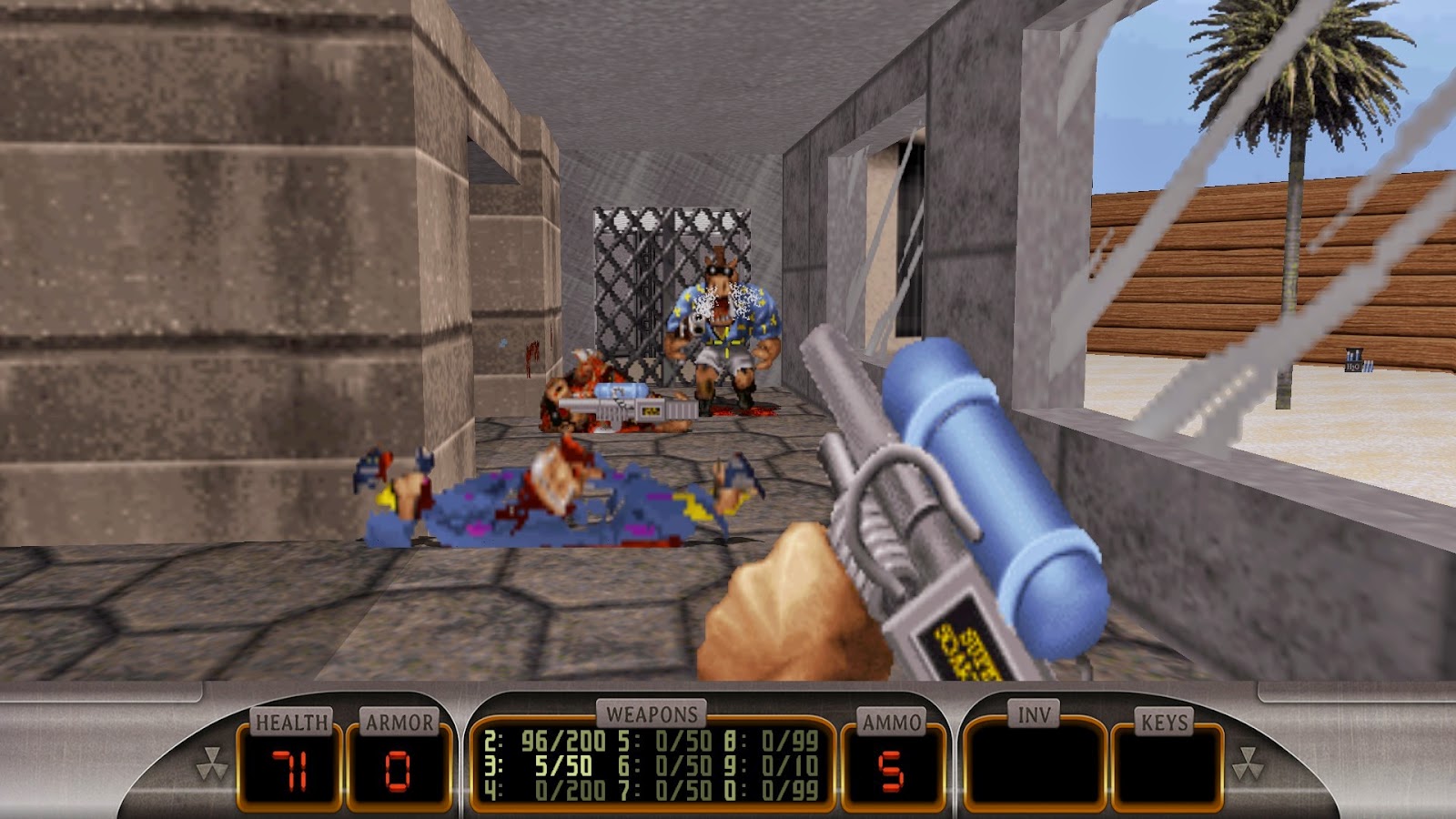 But in other areas the game really shows its age. Aiming is still clunky, with precision all but impossible due to what can only be called a digital aiming mechanic. Enemies are sprites (remember those?) which is quaint to see now, but the way they shuffle around without the slightest hint of AI ceases to be amusing after the first couple of levels.

Related reading: Devolver Digital also does HD remakes of classic FPSers. Such as the very decent remake of Shadow Warrior.

And the multiplayer is nothing short of terrible. It’s impressive that Devolver Digital have opted to throw the kitchen sink into the Megaton Edition, and in the package you get a bunch of fan-created expansion packs, such as Duke Caribbean: Life’s a Beach, Duke It Out In D.C, and Duke: Nuclear Winter. These are of varying quality but certainly turn the download into a bulky single-player package. The multiplayer hurts the package more being in it that removed from it, however. The netcode runs fine, but the imprecise gameplay makes it hard to imagine anyone will spend much time in this game’s multiplayer when there’s the likes of Killzone: Mercenary on the Vita.

Duke Nukem 3D might hold up better than some other classic FPSers, but only just. It’s still a genre that obsoletes itself quickly, and this game is no different in that regard. It’s decent enough fun, but looking back at it it’s nice to realise that the industry has grown up in the years since.

Review: Funk of the Titans (Microsoft Xbox One)