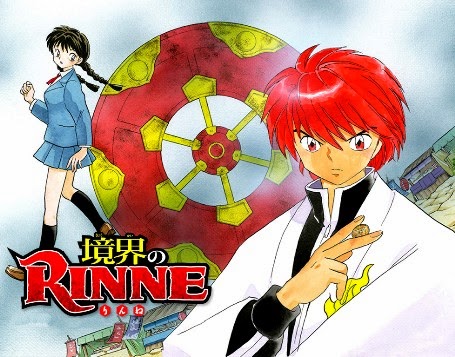 News by Clark A.
Rumiko Takahashi is certainly among the most recognisable figures in the anime and manga industries, being responsible for various prolific, long-running properties like Urusei Yatsura, InuYasha, and Ranma 1/2. Her latest work, Rin-ne (aka Kyōkai no Rinne), is finally due for an anime adaptation and it sounds well worth getting excited about for fans of the original series.
If you haven’t been keeping an eye on the manga since it began serialisation in 2009, the story revolves around a young woman named Sakura Mamiya who has the ability to see ghosts and a shinigami who maintains the balance of to-be-reincarnated souls. Don’t baulk at the obvious parallels with the beginning of Bleach; it’s very much a series with its own tone and narrative. Here’s Viz Media’s synopsis of the manga:

As a child Sakura Mamiya mysteriously disappeared in the woods behind her grandma’s home. She returned whole and healthy, but since then she has had the power to see ghosts. Now a teenager, she just wishes the ghosts would leave her alone! At school, the desk next to Sakura’s has been empty since the start of the school year. Then one day her always-absent classmate Rinne Rokudo shows up, and he’s far more than what he seems!

Animation studio Brain’s Base (One Week Friends, My Teen Romantic Comedy SNAFU) will be tackling twenty-five episodes of the supernatural romantic comedy. Given that manga volumes in excess of twenty have been released so far, there should be ample material to cover.
We’re looking at an April 2015 release date. Provided this one gets licensed for English streaming, you can expect to read our impressions then.
– Clark A.
Anime Editor
Email me at: clarka@digitallydownloaded.net
Share this