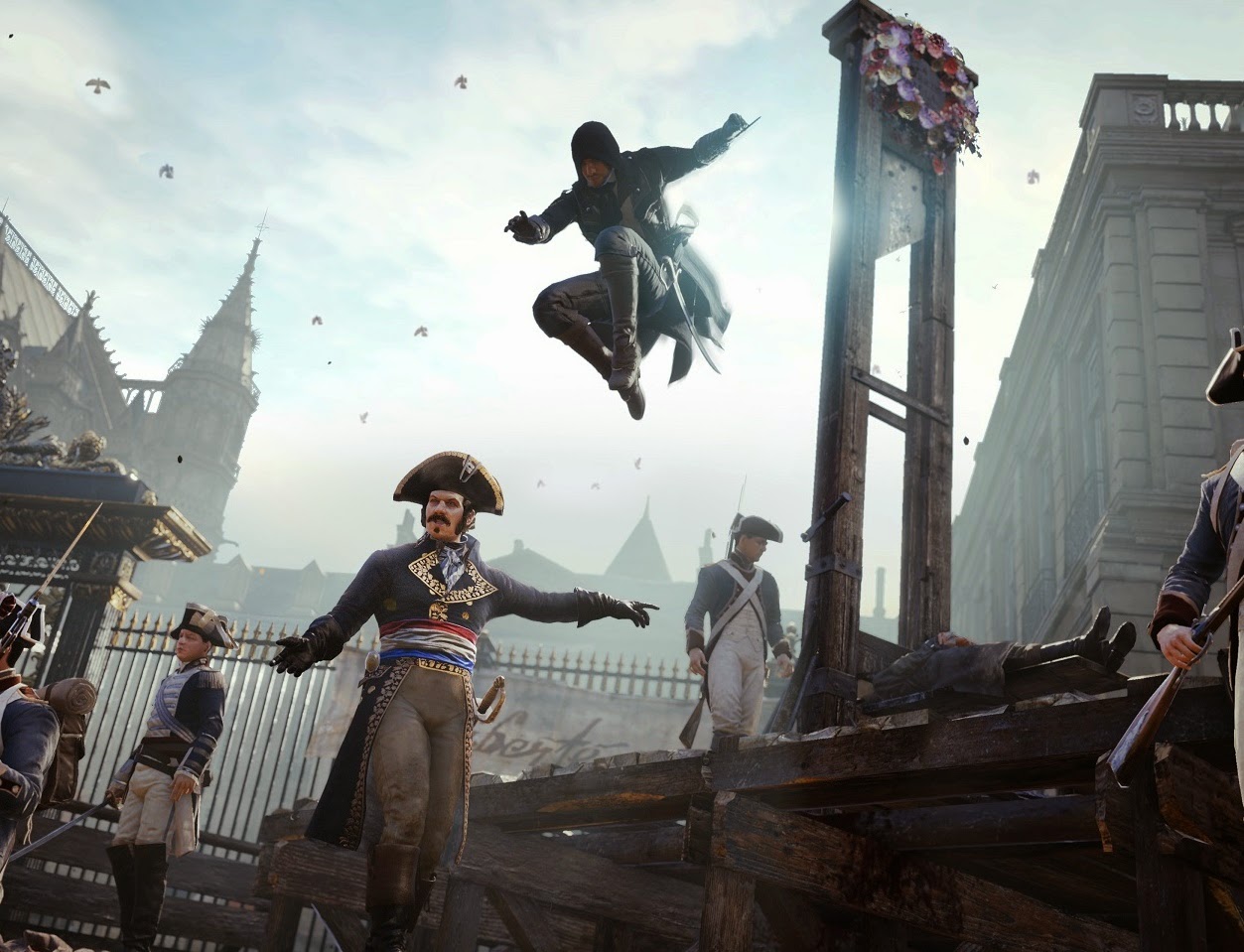 Assassin’s Creed: Unity has problems. And I’m not just talking about its bugs, because frankly those things add a level of unintentional comedy to the game that adds value to it. I wanted to break the game just to experience them, and I’m actually going to be sad once Ubisoft patches those up.

Nor is there a problem with Unity’s sense of scale. Playing side-by-side with Ubisoft’s just-released last-gen Creed game, Rogue, I’ve been able to directly compare the two, and it’s amazing just what the more powerful consoles have allowed the technical artists to achieve. Paris is gorgeously realised, and as densely populated as you would expect from one of the most important cities at the time. The long, lingering pan shots as leading man Arno clambers to a high place to “synchronise” and reveal sections of the map is an order of magnitude more impressive than we’ve seen from games in this series in the past. And that pan shot has always been amazing, so to be able to improve on that, if nothing else Unity is a masterful visual achievement.

On the ground Assassin’s Creed: Unity is also an impressive beast. The detail in the city is meticulous, as is the costuming, architecture, and general understanding on how to construct a Revolution-era French city. The French Revolution was a time of incredible social and political upheaval, and that makes it a vibrant playground for a series that has always been at its best when based in social and political conflict. It’s a more core Assassin’s Creed game than recent examples that have flirted with naval exploits and piracy, but thanks to tight and engaging combat, and a truly obscene number of things to do within the city of Paris itself, it’s hardly a lacking package for raw content. 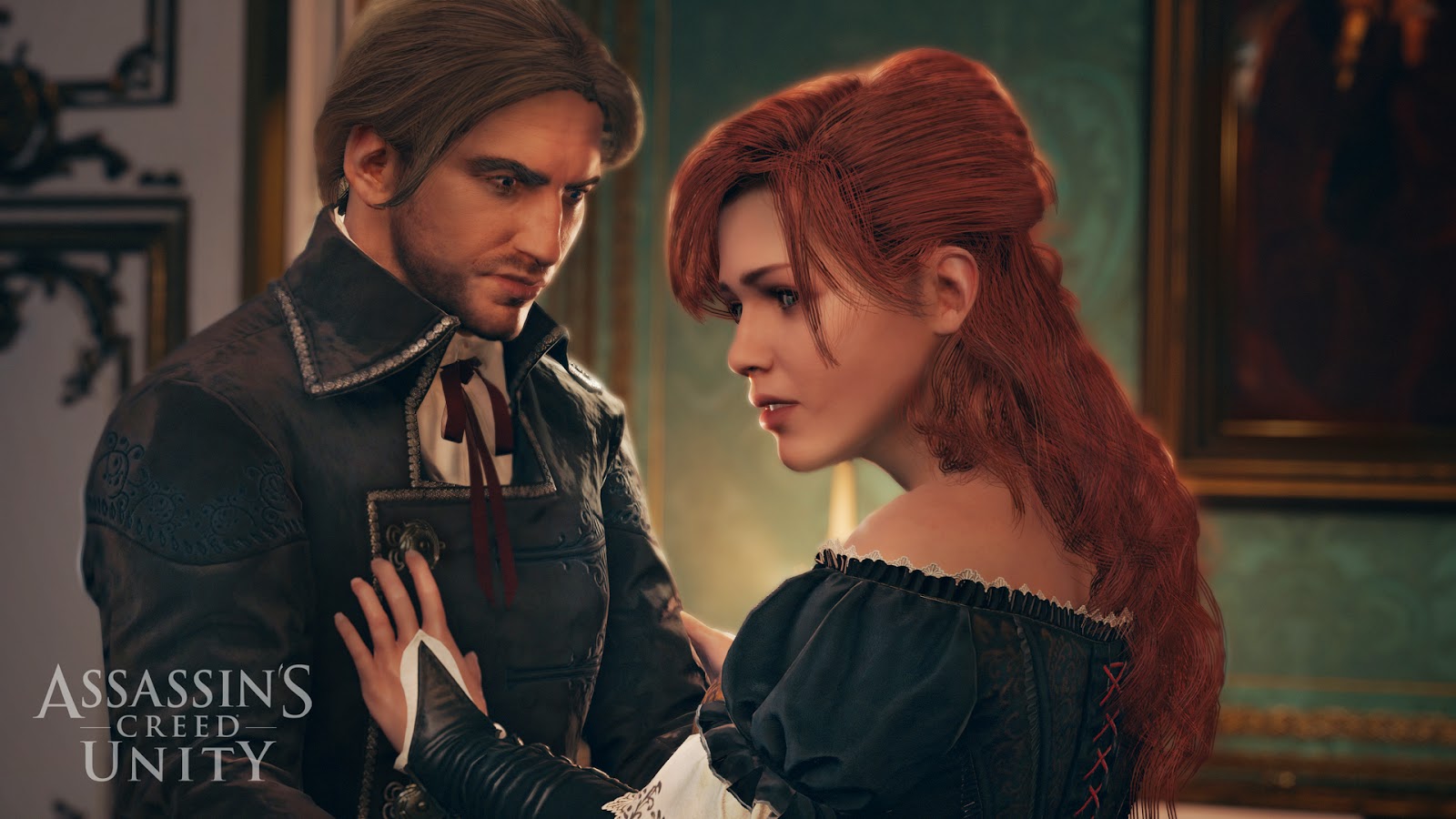 So what are Unity’s problems? In short: the narrative is a train wreck. Irredeemably so. Ubisoft was so committed to creating a blockbuster experience that the creative team behind the game failed to do anything more than throw a string of badly-realised cliches at the player. This is a series that can be creative. We’ve seen it in Liberation and even Rogue, released on the very same day as this, was able to find itse own voice distinct from the generic blockbuster. So for Unity to be so brutally generic is painful to behold.

The issues start with leading man, Arno. A smart aleck and a twerp, Arno is an incredibly unlikable and uninspiring hero. He becomes an Assassin on a contrivance (his dad was one and Arno wants revenge for his death so naturally he becomes one), manages to be framed for a murder he didn’t commit and falls in love with the literal enemy. And this is all within the first couple of hours of play.  When the twists start coming (and the game does enjoy its twists) they’re easy to deduce well in advance because they are so common to the increasingly narrow understanding of storytelling in Hollywood that we’ve already seen them dozens of times before. I was actually looking in the credits for Michael Bay to be listed as a consultant for the script.

This is not the first time I’ve had an issue with Ubisoft’s occasional propensity for throwing every Hollywood blockbuster cliche at a script in a scattershot fashion in the desperate hope that one of them will stick. It happens rarely in the Assassin’s Creed series, but when it happens it’s exhausting for all the wrong reasons. Poor pacing coupled with an endlessly blockbuster attitude all but killed Revelations, and despite all the very (very) good Creed games that have come since that one, it seems that Ubisoft is prone to repeating its mistakes every once in a while. 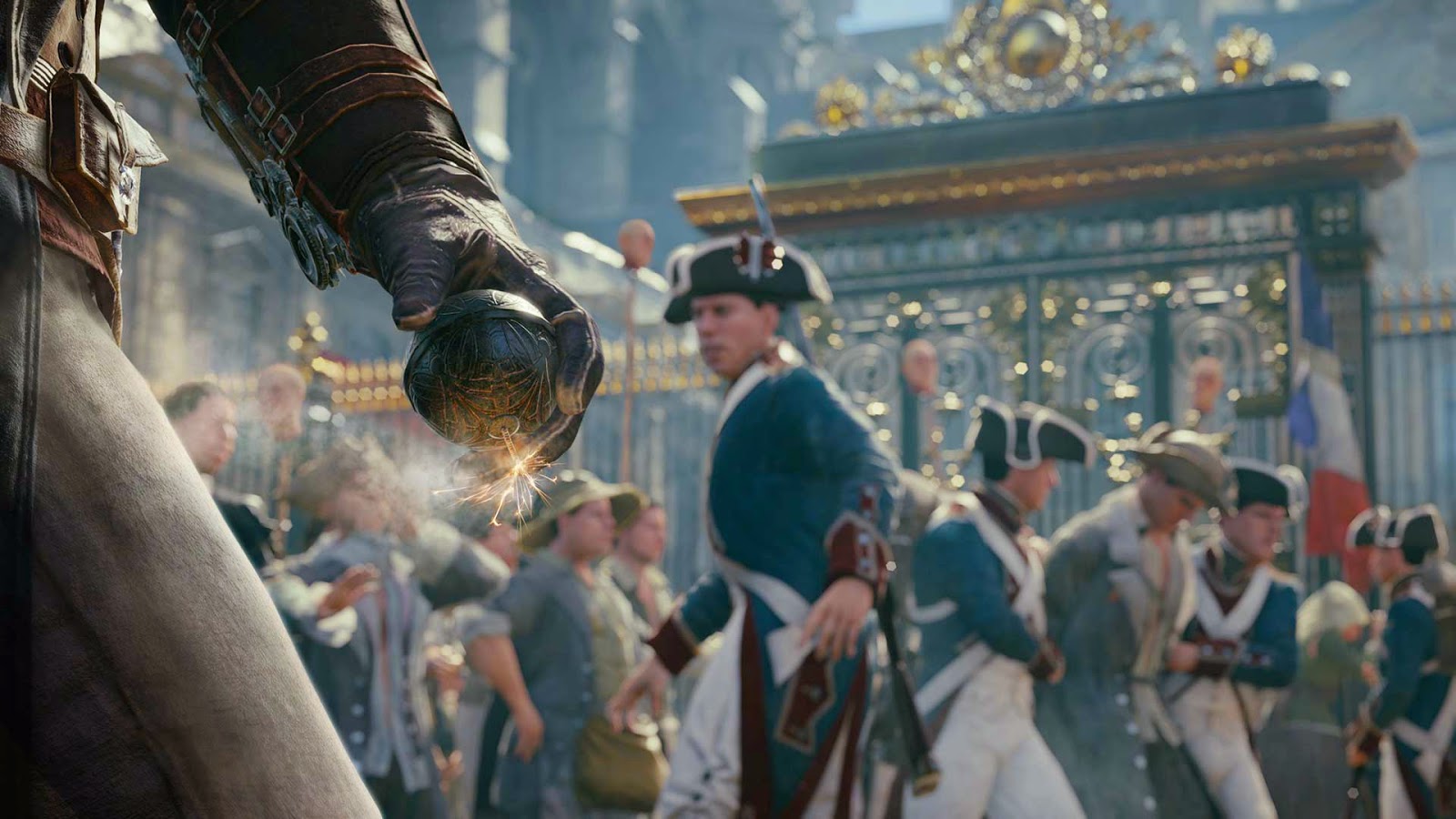 But worse than that, Ubisoft badly got the history wrong in this game. While the series has always taken extensive liberties with its historical context of its narrative and settings, what it has always done well is inspire me to learn more about the historical figures depicted within. In Assassin’s Creed III, for instance, I knew very little about American history before I started playing, but I was sufficiently inspired to research the background of the likes of Samuel Adams after encountering them within the game. I found the narrative to do reasonable justice to most of the real-life personas, based on my imperfect understanding of that research.

But in Unity it’s almost like the developers had a specific political ideology in mind, and aggressively attempted to re-write the history books in order to make that history fit. It portrays Napoleon has a hopelessly boring man rather than the very complex pinnacle of tyranny, and even bit characters like the Marquis de Sade get relegated to caricatures. Despite being now revered as a philosopher and transgressive artist, de Sade was treated by the game as little more than “that crazy pervert guy.” For a development team that supposedly has full time historians on its books, the juvenile treatment of Unity’s historical context is grating, and I retract my desire to see a Creed game set in Japan – I’m almost certain that the narrative would do something crazy and silly with the concept of the ninja in that hypothetical game.

Perhaps it was difficult to treat this period of history without taking “sides,” and perhaps it is impossible to write complex figures like Napoleon and de Sade into a historical fantasy narrative without reducing them to a short checklist of popular tropes and misconceptions, but it’s a jarring experience when previous games in the series have almost universally treated their settings and historical figures with restraint and sensitivity. 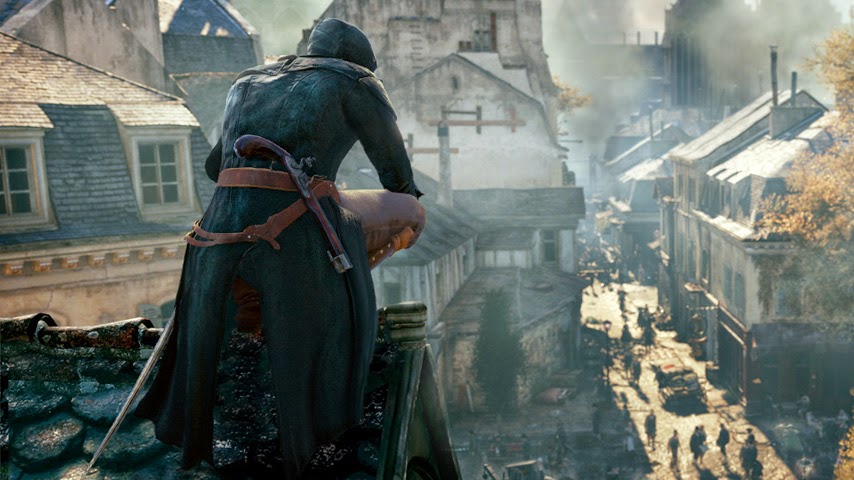 I also have an issue with the game’s attempt to integrate multiplayer into the experience. I understand it from a commercial perspective, and I’m happy for games to have multiplayer modes separate to the single player game, but with very few exceptions, a multiplayer mode within the single player mode does a couple of things – it breaks the immersion by having human-controlled characters behaving outside of the rulesets that have been defined for the game (in other words they behave like AI characters that have had their programming go haywire), and then it reduces the focus on the narrative to instead concentrate players on the human interaction. This is why MMOs don’t have classic stories. Dark Souls was a fine exception to the rule, but Unity’s multiplayer missions are not. Yes, it’s possible to ignore them, unless you’re the kind of person that likes completing their games properly and dealing with all the icons on the map. But you shouldn’t have to skip parts of a game in order to maintain your immersion within it.

Speaking of icons on a map, I also want to briefly address Unity’s now-famous treasure chest controversy. Yes, there are chests that can’t be unlocked without using a companion app, and this is indeed frustrating. Again to compare to Rogue it’s disappointing that Ubisoft was happy to create a self contained experience there, but then load up its main game this year with nonsense that forces players out of the experience. There’s a reason they don’t stick ads in the middle of movies (and a reason that it’s more immerse to watch a film on DVD or at the cinema than on the TV).

Unity plays well, but it’s not really good enough for a AAA-game to play well, and this especially applies to Assassin’s Creed, which has always been a franchise with stronger narrative and thematic value than its counterparts. I see potential in a Napoleonic-era trilogy for the Assassin’s Creed franchise. As I wrote in my Rogue review, I’d love for the next game to star a Cossack doing his thing as Napoleon bears down on Moscow. But for the next one I would hope that Ubisoft puts more effort into crafting an interesting and original narrative than working on the multiplayer nonsense.