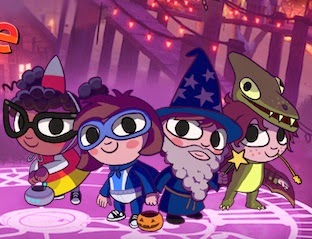 Review by Shaan J.
Looking back on my younger years, I often feel that I simply went through the motions when Halloween rolled around year after year. To me, Halloween felt like more of a chore than anything, a social event that I simply had to participate in because everyone else was doing so. In my final years of ‘trick-or-treating’, I had fine-tuned my routine pretty well; I’d find some Halloween mask in my closet, grab an empty pillowcase for holding candy in, and I’d be ready to go. Efficiency at its finest, am I right?
Perhaps this is why games like Costume Quest appeal to me. Holiday-themed games are a rarity, and yet a well-made one can serve as a massive nostalgia trip, or better yet, allow you to experience all the trappings of your favorite holiday, even if it’s months out. The original Costume Quest immediately drew me in on the premise of creating a simple RPG based around Halloween, and Costume Quest 2 offers up more of the same Halloween antics, with some minor but much needed improvements.
(How’s this for a blast from the past? One of our very first reviews in the original Costume Quest!)
Most notably, the rather simple combat system from the original game has seen a few changes, which manage to add a bit more depth to encounters without ruining the simplistic nature the game strives to curate. A simple rock-paper-scissors style class system adds strengths and weaknesses to each class, and down the line the game introduces an option to counter attacks and build up attack combos. Along with a simple buff system, which comes in the form of “Creepy Treat Cards”, the battle system feels fresh enough to keep you entertained throughout the few hours the game lasts. 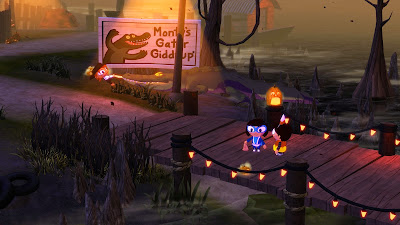 While the PC version of the game originally released with a somewhat flawed healing system (which tasked you with running back and forth between battles to seek out healing fountains), it’s since been patched, and this patch has carried over to the console versions as well. Damage taken still carries over between battles (necessitating healing between encounters), but you can now heal on the fly by giving up a bit of your candy (the game’s take on currency). Some might complain that this makes the game overly simplistic (as the price to heal is relatively low), but it keeps in line with the simplistic theme. This is not a game to be beaten, but rather simply enjoyed.
And let’s be honest, if you’re coming to Costume Quest 2 solely for the combat, you’ve come to the wrong place. Much like the first game, Costume Quest 2 excels in crafting a charming and colourful world to  get lost in, without having to sacrifice dozens of hours like a lot of RPGs demand. After all, the Costume Quest series is most heavily inspired by Earthbound, and it’s all the better for it. Picking up right after the finale of Costume Quest’s expansion Grubbins on Ice, twins Wren and Reynold (having just saved Halloween from the invading Grubbins) must now face off against the evil dentist Orel White, who aims to ban costumes and candy. 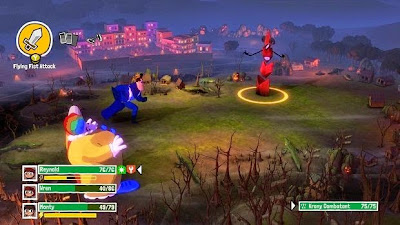 It’s a simple story, but the use of a time travel mechanic paves the way for a few laughs and gags along the way. Getting to meet up with grown-up versions of your character’s friends and various other characters is a nice touch, and developer Double Fine isn’t afraid to make references to its older titles (and Earthbound, of course). As expected from a game that is so heavily inspired by Earthbound, there are plenty of mechanics that center on the fact that the protagonists and their companions are young kids. The ability to run/travel faster is tied to roller shoes, candy is used as currency rather than traditional money, and using the in-game map is much akin to real life; there’s no marker to display exactly where you are. And of course, nothing captures the spirit of Halloween better than roaming around town, trick-or treating with friends, and getting into battles using ginormous versions of your Halloween costume. After all, nothing beats a Thomas Jefferson costume other than a Thomas Jefferson costume that is a few dozen feet tall that throws exploding quills, am I right?
Even with all of its Halloween charm, Costume Quest 2’s greatest strength is that it knows its limits. It’s a short experience, and it’s to it benefit as it never feels bloated. It’s the quintessential bite-sized RPG, wrapped in all the Halloween charm you could ever hope for.