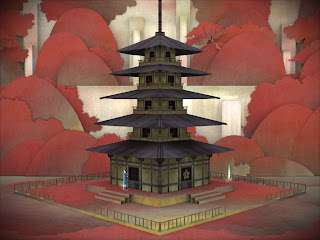 Tengami is everything that games should be. It’s an emotional, heartfelt and intelligent experience that transcends the normal boundaries of what games offer. It’s one of the most unique games available on the Wii U, and it’s something that everyone that cares about games as something more than a time waster should experience.

To say this upfront first, however; the consequence of Tengami being so unique is that it isn’t going to fulfil the traditional expectations that you would have going into a game. There’s no real challenge in the game, for example. Though there are puzzles scattered through its landscape, none of these are especially challenging. Though there is a narrative, it’s not told through cutscenes and dialogue, with the developers more confident in the power of ambient storytelling. And while the game is nice and short, it also lacks action; this is a game that doesn’t engage with anything but the mind. For these reasons, it’s a game that won’t immediately click with some, and players will need to mentally adjust and calm themselves into enjoying something more cerebral before they can start to connect with it.

But once you’ve settled into Tengami’s rhythm, it doesn’t take long for its magic to set in. What’s most impressive about this game is its heritage. Though it’s made by a UK-based developer, Tengami’s development team includes artists that have worked on Japanese franchises such as Shinobido and Way of the Samurai. This is important, as Tengami deliberately evokes a Japanese sense of artistry and spirituality that could only be achieved by a someone with an intimate understanding of the Japanese culture. 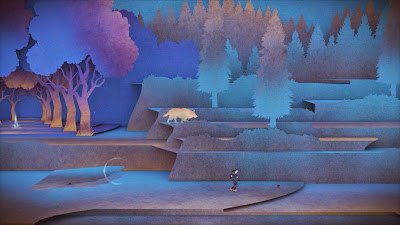 It’s essentially a search for meaning story; a classic genre that’s a part of every culture, from fairy tale to Greek mythology, Chinese wisdom, and Christianity’s The Pilgrim’s Progress. Adopting a literary classic genre such as this suits a game where the main interactivity is literally turning pages in a book. Players control a nameless hero who is travelling through forests, clambering over mountains and encountering spirit denizens as he searches for cherry blossoms and ancient wisdom.

As with a book, Tengami is designed to be completed. The puzzles, which take the form of simple point-and-click mechanics, can universally be solved through basic trial and error, and seem more designed to keep people arbitrarially touching the screen and therefore active within the game than to challenge their puzzle solving abilities. They are largely unnecessary. Even if you do get stuck, the developer, Nyamyam, has a complete walk through available freely on its website. Rather than challenge, Tengami instead seeks to inspire the imagination, and gently encourages players to hit up Google (or the local library) to better understand what they’re seeing. What is the meaning of the torii? Why are there wolves, an animal extinct in Japan since 1905? And how does the history of papercraft relate to the story of finding oneself? These are the kinds of mental puzzles that Tengami sets the player to complete for themselves outside of the game.

Working through these mental puzzles is immensely rewarding, because it quickly reveals additional layers of depth within Tengami’s narrative. For instance, understanding the emotional and spiritual power of Japanese papercraft (as exemplified by the story of Sadako Sasaki) makes the decision to give the game a papercraft aesthetic so poignant. Within every scene (or “page”) in Tengami is an environment packed with thematic and narrative depth, making it one of the most engaging narrative experiences that we’ve seen in some time. 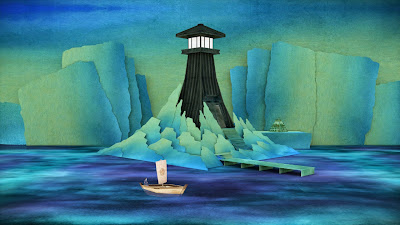 If there’s a criticism to be made of the game, it’s that there’s next to no reason to have it on the Wii U when there’s already an iPad version, and a PC version on the way (and I assume that there will be modest technical requirements that would allow anyone with a laptop to play). The way this game is designed is that you need to look directly at the screen that you’re interacting with, and in this case it’s the Wii U Gamepad. It is almost impossible to navigate around the world without looking at this screen, meaning that there’s no reason to have the TV screen in operation at all. And, frankly, the Wii U Gamepad screen is of a low quality that doesn’t even come close to the iPad or a nice PC screen. Tengami’s art style deserves a high quality screen.

It’s perfectly understandable that Nyamyam would resist introducing button controls, as part of the experience of Tengami is in physically touching and manipulating the environment, but it does mean that this will be the least version of a beautiful game thanks to technical limitations. However, on the positive side the MiiVerse stamps that you can find hidden in the environments are gorgeous and unique to this version of the game.

Tengami is an arthouse game. It’s the kind of experience that, like Gone Home, people will dismiss for lacking action or having a narrative that doesn’t treat its players like idiots, but it’s also the kind of game that shows that the games industry is growing up and pushing the limits of what can be achieved given the freedom and resources to be properly creative.