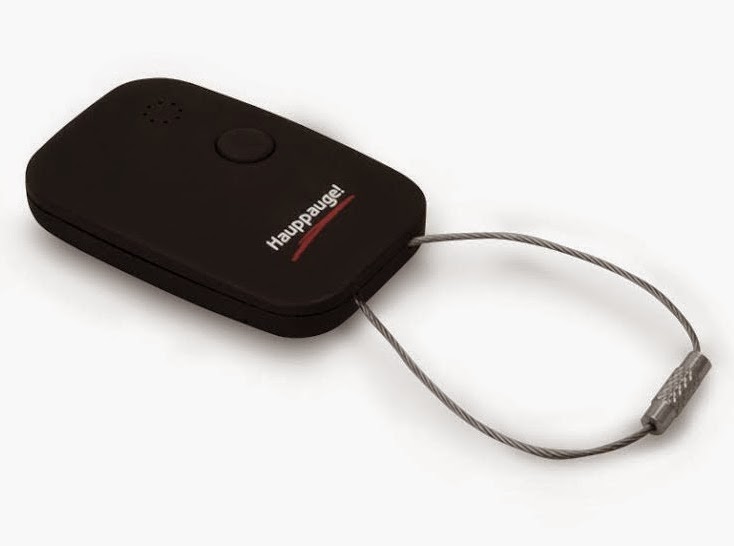 I’m not much good at selfies. There’s the unappealing subject matter, for a start. Then there are the technical problems. Snap a shot with your phone’s front camera, and you inevitably get an off-centre view of a bit of your face and a lot of your arm. Shoot with the rear camera and you get a picture of you, your phone, the mirror you meant to clean five years ago, and some random background squalor. Yuk.

Enter the Hauppauge mySelfie. It’s keyfob-based switch that pairs wirelessly to your device via Bluetooth, and its main purpose is to replace the ‘shoot’ button on your mobile camera. Et voila! Suddenly you can take pictures from a distance. No more arms, mirrors, bedroom untidiness or inadvisable close-ups. You’ll need a Bluetooth 4.0 device, but the only other restrictions are the standard 10-metre range and the 6-month capacity of the replaceable battery.

Operation is reasonably straightforward. The first task is to pair your device with the mySelfie fob using Hauppauge’s dedicated app. After that, it’s easy. A quick press captures a shot, while a longer one changes between front and rear cameras. The mySelfie doesn’t support burst mode or any fancy effects, but it’ll take photos as fast as you can hammer away at the button.

The app also provides basic assistance for the absent-minded. Assuming that your phone has an active connection to the fob, it’s possible to use one part of the duo to trigger an alarm on the other. It’s a nice idea, and the thinking is that it might help you to find your missing keys. However, the fob spends most of its time in ‘sleep’ mode, so this won’t work if you haven’t used it recently. Other features include a map to show where the devastating loss took place, and a proximity sensor which tells you when your precious phone, children or animals have wandered off on their own. In practice, though, variations in the Bluetooth signal mean that false alarms are a fairly regular occurrence.

The Hauppauge mySelfie is full of potential, promising a world of group shots, selfies and morally dubious covert surveillance at the click of a button. The photo functionality works well, but the added-value features are more of a hit-and-miss affair. Since the mySelfie is a tad more expensive than similar products, only the most forgiving of narcissists need apply.

Review: Stealth Inc 2: A Game of Clones (Nintendo Wii U)