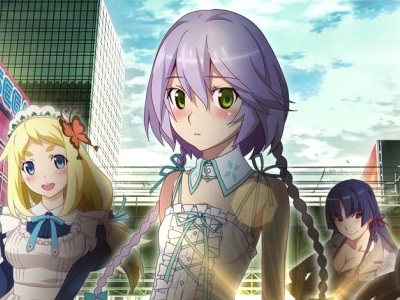 Review by Clark A.
Akiba’s Trip: Undead and Undressed surprised me and likely not for the reasons you suspect. Yes, in a game where the player is permitted to indiscriminately shred the clothes off strangers in broad daylight, my biggest takeaway was not the liberty to don the stat-boosting panties of fallen civilians or bash in the heads of pseudo-vampires with a clunky computer monitor. What perplexed me is how a game so firmly entrenched in Japanese and otaku culture didn’t quite seem to accurately capture the spirit of Tokyo’s Akihabara district.
From a narrative perspective, Akiba’s Trip primarily exists as a means of parodying otaku culture and, perhaps more broadly, the absurdity of the consumerism and materialism associated with it. That goal is met with great success – through the writing, anyway – as the plot is ridden with clichés that pay loving homage to the worlds of anime, manga, figurines, and video games whilst going out of its way to mock the obsessed protagonist. Likewise, the combat system based on thieving the clothing of your likeminded adversaries is so flashy and over the top that, like Akihabara itself, it’s bound to grab the attention of anyone who sees ten seconds of gameplay footage.
(You can read Nick’s review of the PlayStation 3 version here)
The effectiveness of the satire is somewhat limited in practice elsewhere, however. One would expect such a realistic digital depiction of Akihabara to unabashedly feature shops choc full of risqué material to make any unaware foreigner have a field day or a heart attack (haha, I remember the first time I actually got out of an elevator in a shop on the wrong floor… ed), but virtually all the stores are lamentably rendered with text-based menus. In turn, the shops are filled with broad, general items to purchase with rarely anything that pushes the envelope. That’s not actually how Akihabara works. Akihabara is either awesome, fascinating or repulsive, depending on who you are, precisely because it is absolutely filled with stuff in shops that can only be described as “peverse.” 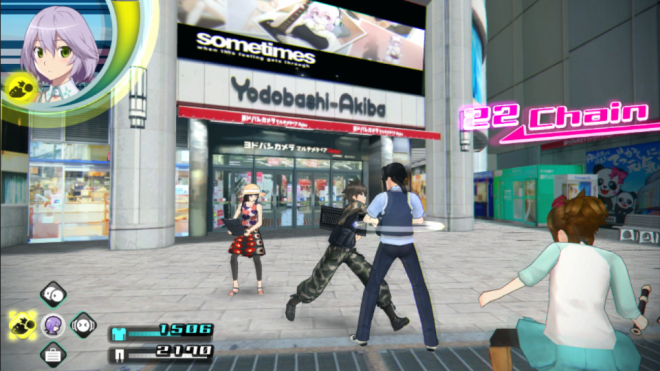 And this creates something of a disconnect from the main character and the plot in general. The protagonist is constantly told that they’re a flaming otaku by practically every major NPC and there are innumerable choices during the many dialogue-heavy segments that allow the player to verbally exhibit rampant otaku behaviour. But for someone who was lured into a job interview based on the promise of free figurines and who has the time to go around town solving ridiculous sidequests, our hero doesn’t exemplify the type of overpowering enthusiasm one would naturally associate with Akihabara.

Most of the otaku atmosphere comes in the form of advertisements for niche JRPGs, which was an exceedingly crafty touch on the marketing end of things. When it comes to actually feeling like an otaku in the very land of otaku, though, Akiba’s Trip is somewhat underwhelming. Most of the character’s actions – browsing social media, hanging out with friends, becoming a fashionista – don’t feel all that entrenched in obsession with their hobbies. You’ll encounter a myriad of other characters throughout the game that similarly sheath the extent of their otakuhood despite the game’s insistence that they are indeed nuts about Japanese culture.
Sure, many real-world otaku do abstain from revealing their hobbies in the interest of social status, but that doesn’t make a ton of sense when many characters are outright labelled as such and everyone knows the protagonist’s tendencies from the outset. Having a main character that is looked down upon by his peers in such a way was a creative choice for a protagonist but ultimately feels underutilised. Considering how over the top this game is, there was a lot of elbow room to go nuts by wholly embracing Akihabara and it’s slightly disappointing the designers didn’t go the whole nine yards. 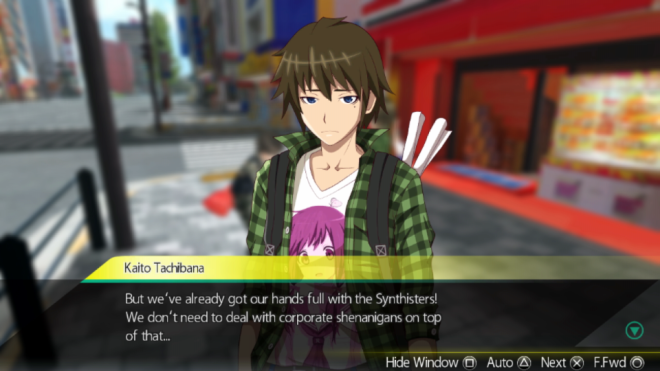 Despite Akiba’s Trip’s massive scope and wonderfully inventive concepts, it’s more content in being an outlandish beat-‘em-up with a silly story than fully expounding on the thematic absurdity. As for that beat-‘em-up gameplay, it’s reasonably unique. Rather than just pound away mindlessly foes, you’re systematically trying to strip them by weakening their clothing’s endurance on an individual basis. The combat isn’t overly engaging once you get a grasp of its simplicity (and even more so once you learn how to link together combos competently), but alternate weapons with unique attributes add enough wrinkles to keep things interesting throughout an entire playthrough and beyond.
The components that facilitate the functionality of the battle system are actually more enthralling than fighting itself in my estimation, however. Decking out your character with a wardrobe you’ve purchased with hard-earned yen (or better yet, nicked off the back of some poor sucker) is immensely satisfying. The nature of the game – trying to avoid being stripped yourself – means that changing clothes frequently is both a necessity and a worthwhile in-game pastime.
The exploration is executed in a style more conducive to beat-‘em-up gameplay as well. Pressing the Select button boots up a menu that can instantly teleport you to the next mission objective or any street on the map you’ve visited. You can roam around the city at your discretion on foot, but certain areas aren’t interconnected so you’re always going to be tempted to click the glowing yellow icon to progress the story. I appreciate that the developers have eliminated travel time that often plagues similar titles, even if this means that exploring Akihabara itself winds up being overlooked. 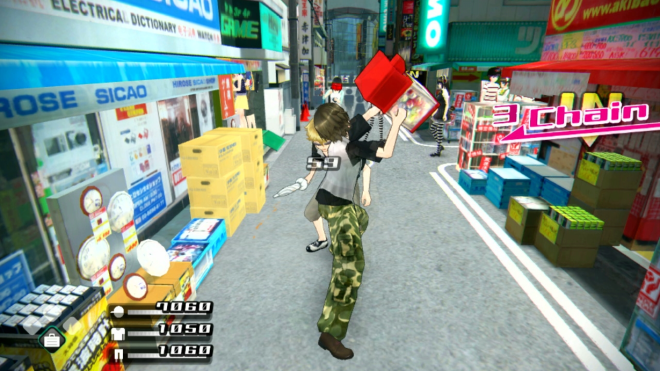 It’s also great that the game trims out much of the fat of modern, bloated game design; this is a succinct experience that wraps up in five or six solid hours of genuine enjoyment. The teleportation options will doubtlessly prove handy in making additional playthroughs feel less laborious as, once, you’ve seen all Akihabara has to offer, you’ll probably lack the drive to explore every alleyway ad naseum. Alternate endings based on player responses and actions means there’s ample reason to replay the game. You’re not going to witness all the ridiculousness in a single playthrough, that’s for sure.

To its credit, the game succeeds at delivering humour beyond the thematically appropriate as well. The main character carries around a smartphone at all times with access to mock applications that serve little purpose other than a little foreshadowing and a lot of giggling. While the Twitter (sorry, “Pitter”) posts and emails are admittedly far more representative of English-speaking communities than the native Japanese ones, there’s no denying the painstaking lengths the localisation team went through to replicate Internet lingo. The result is simultaneously glorious and hideous, depicting online attitudes that had me busting a gut more than once without holding back the cussing, green texting, and outright spam.

Between a battle system unlike anything I’ve seen before and a story that pushes the boundaries of comedy, Akiba’s Trip has plenty of personality going for it. Expanding on the world of Akihabara itself would have elevated the experience into a truly classic one, but as is, fans of niche experiences still ought to take this trip.