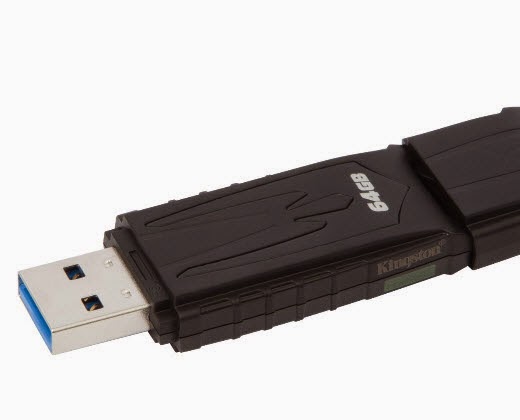 There is not a lot of sizzle to be had when talking about portable memory, but there are a handful of key things to look for such as ease of use, reliability and speed. We had a chance to try out the 64GB Kingston HyperX FURY and the results were positive across the board.

To start with, the FURY is a nifty-looking little fellow with ridged edges that make it easy to pull out and push into your desired USB drive. It also includes a cap that fits snugly on the front but can be clipped to the back which also has a loop built in for clipping to something if desired. Beyond that the black case has only the storage size stamped in silver to help it stand out. Do not drop it on an all black carpet (okay, I did that. Thankfully the storage amount was the right-side-up so I found it easily enough). And for people that like some novelty in their USB designs, this one is obviously going to bore them. That said, it can be customised a little with aluminium inserts, and this’ll make business folk using it for work feel like they’re personalising their drives a little, at least.

The HyperX Fury comes in three sizes: 16, 32 and 64 gigabytes. We got to sample the last option, which was thankfully very easy to use. I tried this unit out on three different computers running three different operating systems and it happily installed the drivers on each without any work on my part. The only one that hiccuped slightly was my Windows 8 Pro, which for some reason did not ‘take’ the first time. However, unplugging and plugging the USB stick back in did install the drivers properly then. 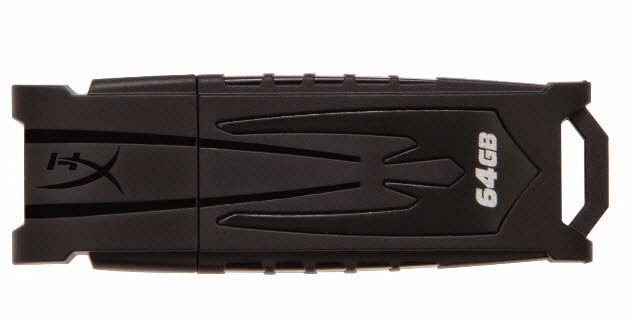 Once the drivers were installed, the Kingston FURY showed up as a drive on my computer and pulling files onto and off of it was straightforward. I also used it to backup and restore data on my PlayStation 3 and 4 and had no issues with it being read from either of those systems.

Next up I wanted to test how quickly it transferred data on a couple of different machines. I wrote and dumped a full load of data onto both types of connections. With maximum read speeds of 90MB and a write of 30MB, this is not the fastest stick on the market, but the data transfer times were respectable enough. A full load of write data over USB took me about forty minutes in total, but the full dump over USB 3.0 clocked in about nine minutes.

The HyperX Fury never had any transmission issues, the data all checked out fine afterwards and the 64GB of space is nothing to sneeze at (by comparison the Wii U only has 32GB internal memory — if you get the premium version). Solid if unspectacular transfer rates and high ease of use and compatibility makes this a solid choice for making your data portable.

This product can be purchased here