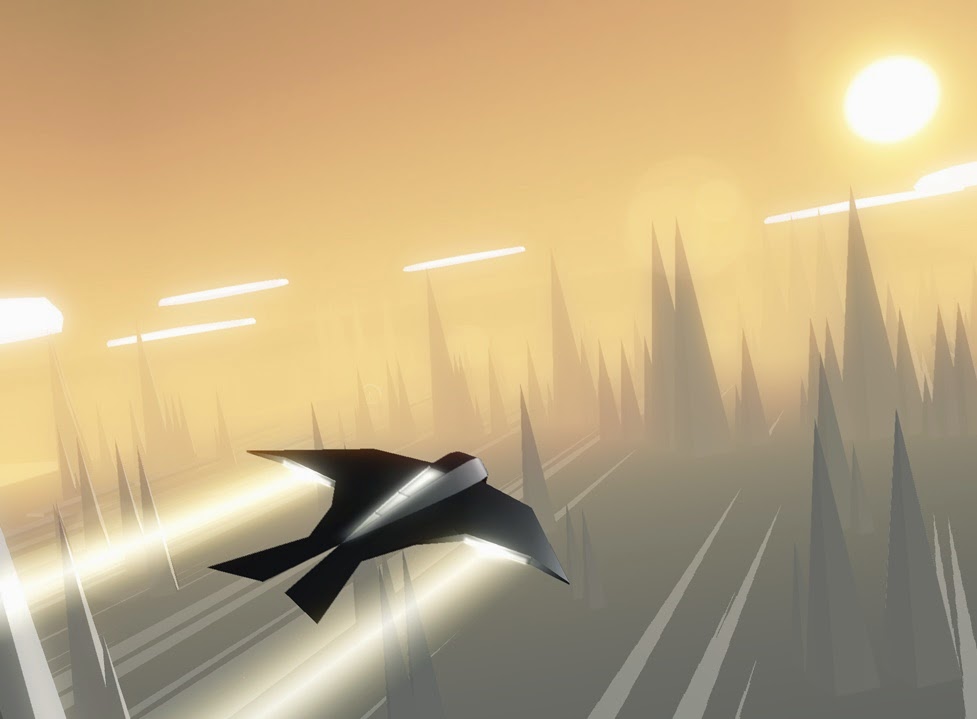 Beneath its gorgeous minimalist aesthetic, Race the Sun is a simple 3D runner game. It’s disappointing, because it actually could have been more than that.

In the game players control an aircraft with no real vertical control. They can swerve left or right, but that’s it. There’s the occasional power up (such as a jump pickup) that briefly breaks that rule, but for the most part you’re driving at near ground level looking to avoid the many objects in your way.

The problem is that you’re in a solar powered craft, and the sun is setting, so you need to fly fast in order to keep up with it. There are speed boost power ups when mean that you’ll briefly fly faster than the sun is setting (effectively giving you more time), but those are few and far apart, and for the rest of the time it’s impossible to keep up with the speed of the sunset. In other words, you’re doomed – eventually the sun will set and the craft will no longer be able to fly, and then it’s game over. 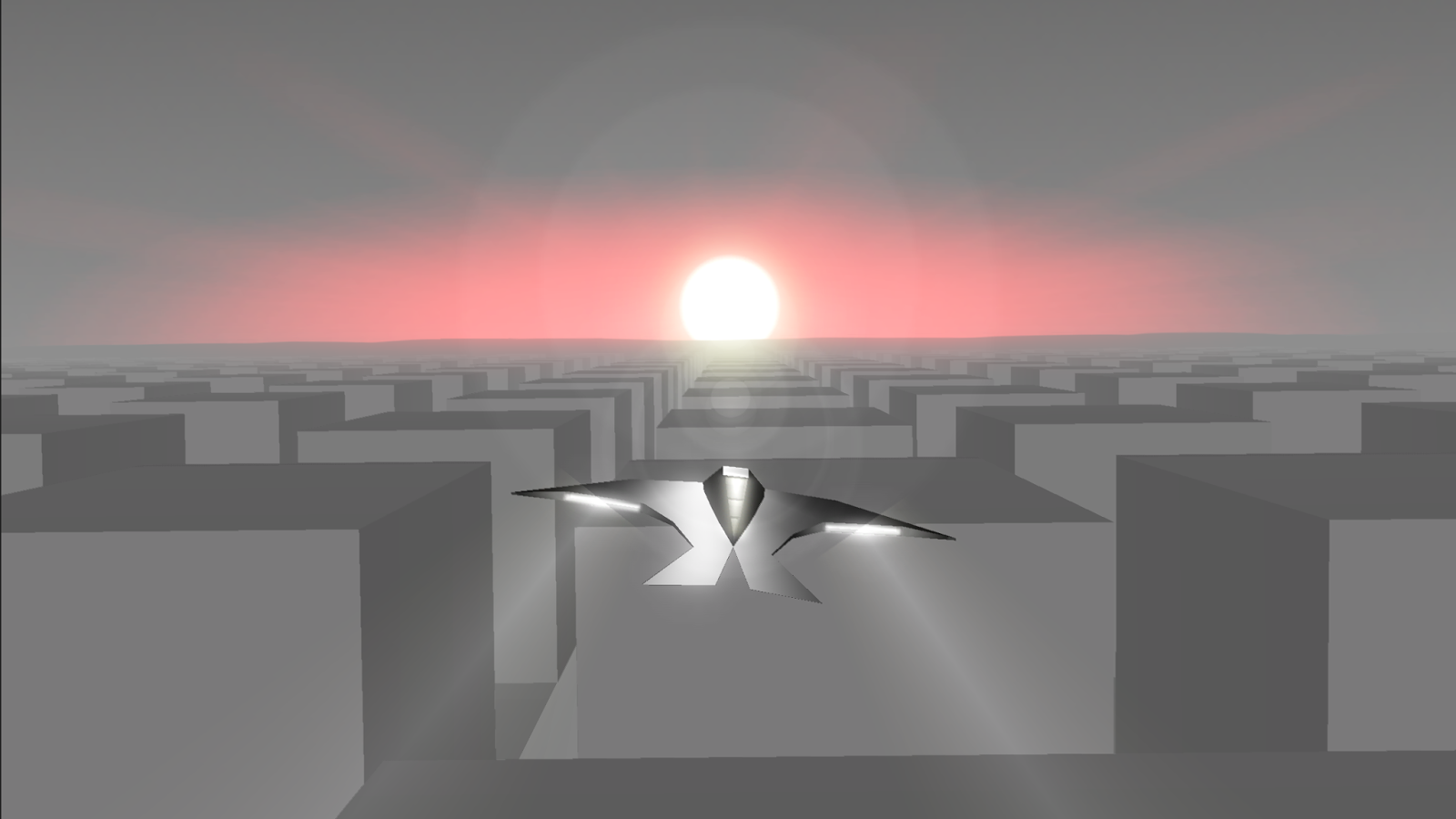 So you might as well collect as many points as possible while you can.

There are gems lying about that increase the score multiplier, and the idea is to move through as many stages as possible earning as many points as possible as long as the sun lasts. Then you’ll do it over and over again to try and move up through the leaderboards.

Race The Sun’s greatest feature is that each day it changes the layouts of levels, giving players a new challenge to look forward to. It’s also got a neat sense of twitch speed, requiring real skill to pull off impressive stunts such as well-timed leaps onto thin ramps covered with loads of points pickups. Because each individual game is over quite quickly there’s a strong “one more go” appeal to it, as well.

But then this applies to most runners, and most runners don’t cost more than $Aus10. There’s a decent minimalist art style backing the game up, and a standard mobile game progression system (complete in-game objectives to “level up” and gain access to more abilities which help to last longer), but none of this really extends the value of the game. It’s still a mobile game that would be free to play on mobile platforms. 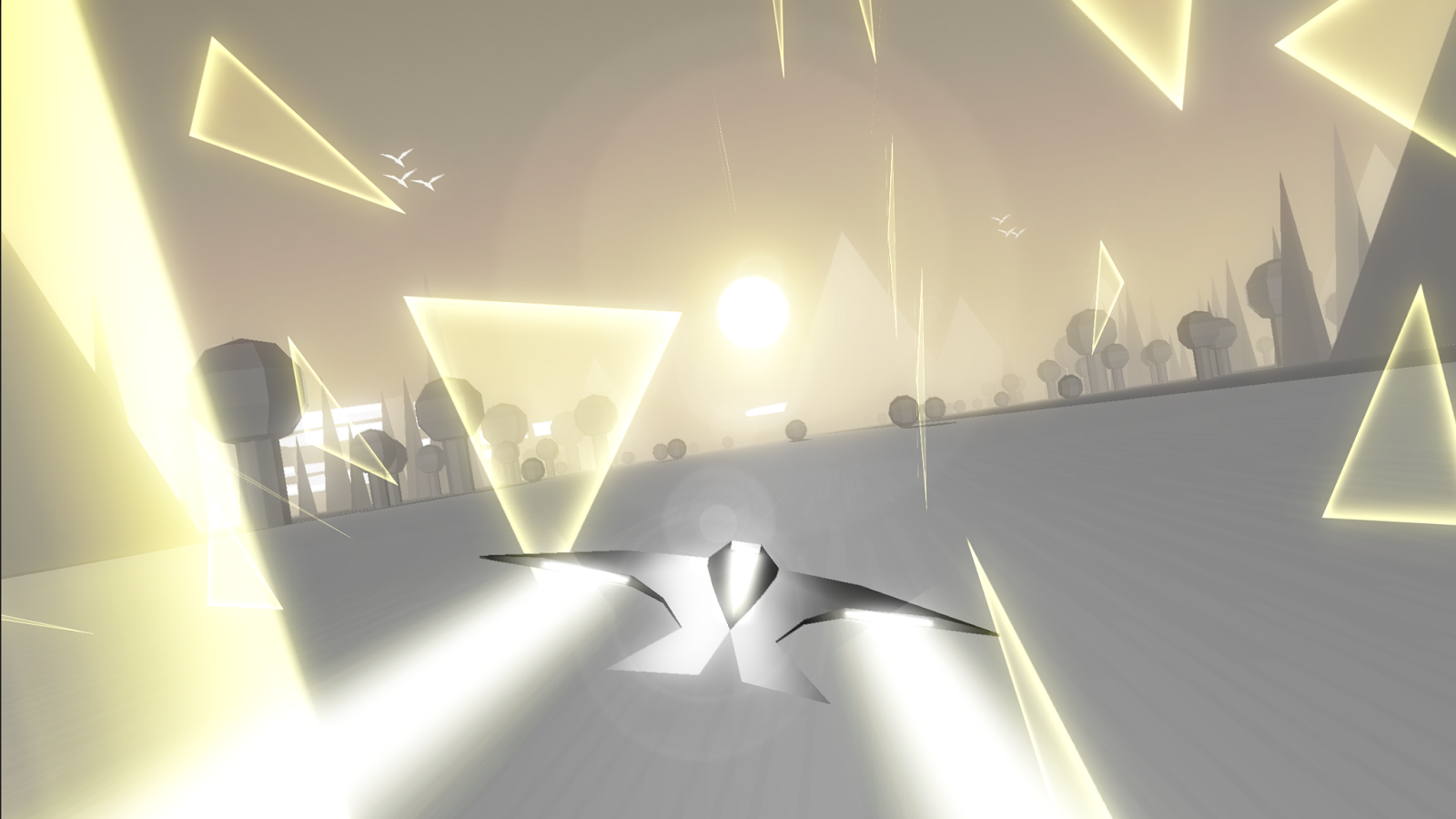 It’s also disappointing that there wasn’t more done to give the game some kind of thematic depth. Environmentalism is a big issue at the moment, and the idea of the sun setting on our desperate hopes to keep up with it is nihilistic, but perhaps the reality of the world now. I’m not asking for a full-fledged RPG-style story mode, but it would have been nice to see the concept of Race The Sun applied to something more meaningful than a twitch arcade game. After all, we’ve seen other developers use even the simple arcade genre to create games with genuine meaning – the likes of Hohokum and Entwined are some of my favourite games of 2015 precisely because they’re simple arcade-style games that are also conceptually deep and engaging.

There isn’t much more to say about Race The Sun. It does what it promises in offering a fast runner-style game, and it’s nice that the developers went as far as to offer completely new level layouts each day, but ultimately this is as shallow as the likes of Doodle Jump or Temple Run, and costs an order of magnitude more money.