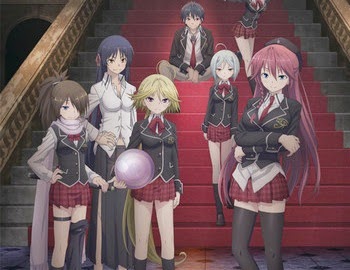 Trinity Seven has seen its share of promotion over the past few months as the forthcoming romantic comedy crawls ever closer to its October 7th air date. With that hype comes another trailer courtesy of Avex Group’s official YouTube page and this one packs more digits than either numeral implied in its title. Seriously, those striving to be multilingual should take this opportunity to brush up on their Japanese counting skills.

Based on the manga of the same name (sans subtitle anyway), Trinity Seven has plenty of fantastical elements such as magic interspersed throughout its romcom base. The animation is being handled by Seven Arcs, a company that, purely coincidentally, probably has the best name suited to the task.

As a personal aside, I’m hyped for the appearance of voice actresses Rie Kugimiya (Hayate no Gotoku, Toradora) and Ryoka Yuzuki (Kill la Kill, Naruto Shippuden). Both will be starring as members of the show’s decidedly expansive female cast.

The promos below might be in reverse chronological order, but the one at the top wins the award for snazziest background music – no contest.

There’s no news regarding any major English streaming services nabbing the show yet, but I imagine we’ll hear something soon, what with the end of the summer anime season in a couple weeks.

Tokyo Game Show report: People who claim it is losing relevance are missing the point