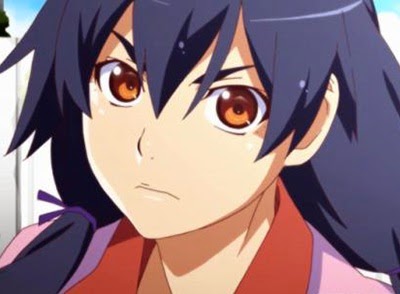 Hanamonogatari, the latest arc of Nisio Isin’s Monogatari series, aired on Japanese television last week as one lengthy marathon. English-speaking fans won’t have to wait long at all to catch up on the latest arc, though, and they won’t have to jump through hoops to watch it either. Daisuki, an increasingly varied source for free, legal anime streaming, will have the honour of adding the show to its lineup just a week after its debut.

Considering the amount of subtitles and sheer attention to detail this series demands at times, the speediness of the translation is much appreciated.

So yes, provided you’re located in a region where the stream is supported (Australia, Canada, Ireland, New Zealand, South Africa, USA, UK), you can legally watch the entire series at your own leisure. We’re certainly not complaining, although you’re going to need considerable knowledge of Bakemonogatari’s numerous sequels and prequels to get true value out of this one.

If the below synopsis sounds like utter gibberish, feel free to read our review of Bakemonogatari from earlier this week for ample reason to consider the anime adaptation of the Monogatari series.

The bee apparition is now gone, and summer vacation where the phoenix apparition averted harm is over– Around Koyomi Araragi and the girls who started a new trimester, apparitions, or perhaps threats even worse, were creeping in ever closer. Tsubasa Hanekawa, Mayoi Hachikuji, Suruga Kanbaru, Nadeko Sengoku, Shinobu Oshino, and Hitagi Senjyogahara. Their soliloquies, confessions – and farewells.

You can check it all out via Daisuki as soon as tomorrow. If you fancy watching anime on your iOS device, you can view it there through the official Daisuki app. Crunchyroll will be nabbing the series at a later date as well, although it remains to be seen whether you’ll need a premium account to access the episodes.

Cubemen 2 has a Wii U release date