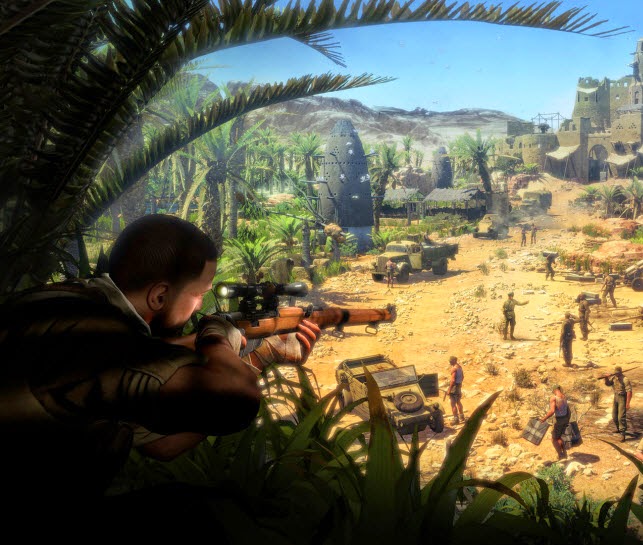 The Sniper Elite series is not for everyone. It presents a slower, more tactical side to shooters than the popular quick twitch Call of Duty or Battlefield games. But the series has its fans.

The previous Sniper Elite often felt stifled, to the point where it played like it was on rails and the focus was solely on the shooting mechanics. In light of that Rebellion deserves credit for creating a more interesting, almost open world environment in Sniper Elite III. The end result is a more polished, approachable title – assuming that the gritty, methodically paced nature of the game appeals to you.

The story still revolves around the incredibly dry and uninteresting Karl Fairburne, who has traded in adventures in Europe for North Africa this time around. The deeply voiced, one-note character may be the protagonist, but thankfully Rebellion realises that the real star of the show is the actual sniping mechanics. Unlike the last entry, where the player was often along for the ride in something of a colour-by-numbers affair, this time around there are optional side quests and multiple ways to approach and complete each of Karl’s missions.

This extra flexibility affords a greater sense of control and ownership of the events that take place in Sniper Elite III. As one would expect, the gameplay is mostly focused on those long ranged kills, but mines, pistols and stealth are also part of the equation. The AI here is better than the last iteration of Snipe Elite, but it is still very limited. A game like this should never make a viable strategy out of shooting an enemy in the hip and running away. But in Sniper Elite III if you do that the enemies will indeed exhibit the kind of short-term memory loss that served as the foundation for Christopher Nolan’s popular movie Momento. It sounds silly, but this is not an exaggeration as the enemies will simply stroll back to their post after being shot, having both forgotten your existence and the fact they’re bleeding out all over the place.

This above point is worth mentioning because Sniper Elite III tries very hard, and would have succeeded in creating a gritty, atmospheric world around Karl as he stalks his prey, were it not for how ill-equipped the AI is in handling snipers. That said, the enemy AI does the basics well enough. Karl needs to use not only visual cover, but to take advantage of the environment as well by timing his shots when something like the roar of an airplane can drown out the gunfire noise. The enemy troops are very adept at pinpointing Karl’s location if they do hear gunfire. 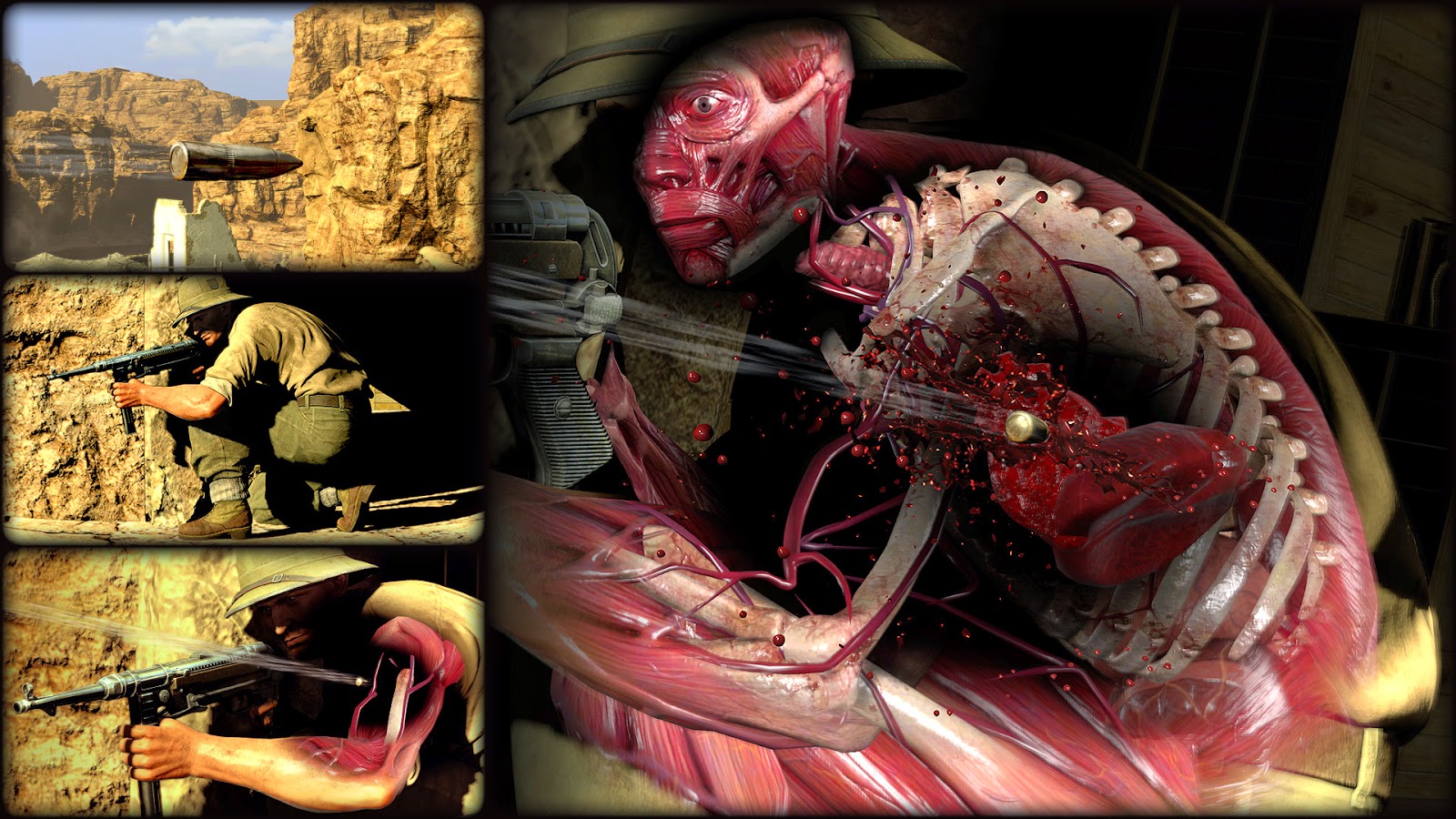 The two most interesting aspects to Sniper Elite III are the actual sniping mechanics and of course the popularised slow motion, close-up kills. The former is excellent, with an array of settings that can allow for as much automatic help as you want. I recommend dialling these down or off completely. Certainly this raises the difficulty and makes Sniper Elite III more difficult to learn, but the kills are far more dramatic and rewarding when actual skill was completely responsible for the kill.

As for the kill camera, I will begin by saying that it is completely gratuitous and unneeded, but it is still fun in the way that Mortal Kombat’s X-Ray and Fatalities reward the player on a gruesome level. While the Fatalities in Mortal Kombat are certainly violent and have been for years, they have a sense of irony to them, a tongue-in-cheek middle finger to criticism of violence in games. The X-Ray attacks, which happen mid-fight and feature bones breaking and are accompanied by the sick sound of organs being burst lack that ironic context that give them a purpose in the game. These kills in Sniper Elite III feel more akin to the X-Ray attacks – still absurd at times, but lacking any sense of humour to them. They are a slowly animated, grizzly trophy for executing your shot to perfection.

Rebellion clearly wants to create a game with a degree of authenticity to it. The sniping relies on realistic elements to take into consideration, such as the wind and distance. Using cover for both the line-of-sight and sound helps to make the stealth more convincing. The visuals are generally quite good, with the new location giving the background and overall level aesthetics pleasing to take in. It’s worth noting that in addition to being exploitative, the kill cams are also more than enough to break any sense of realism in the game. 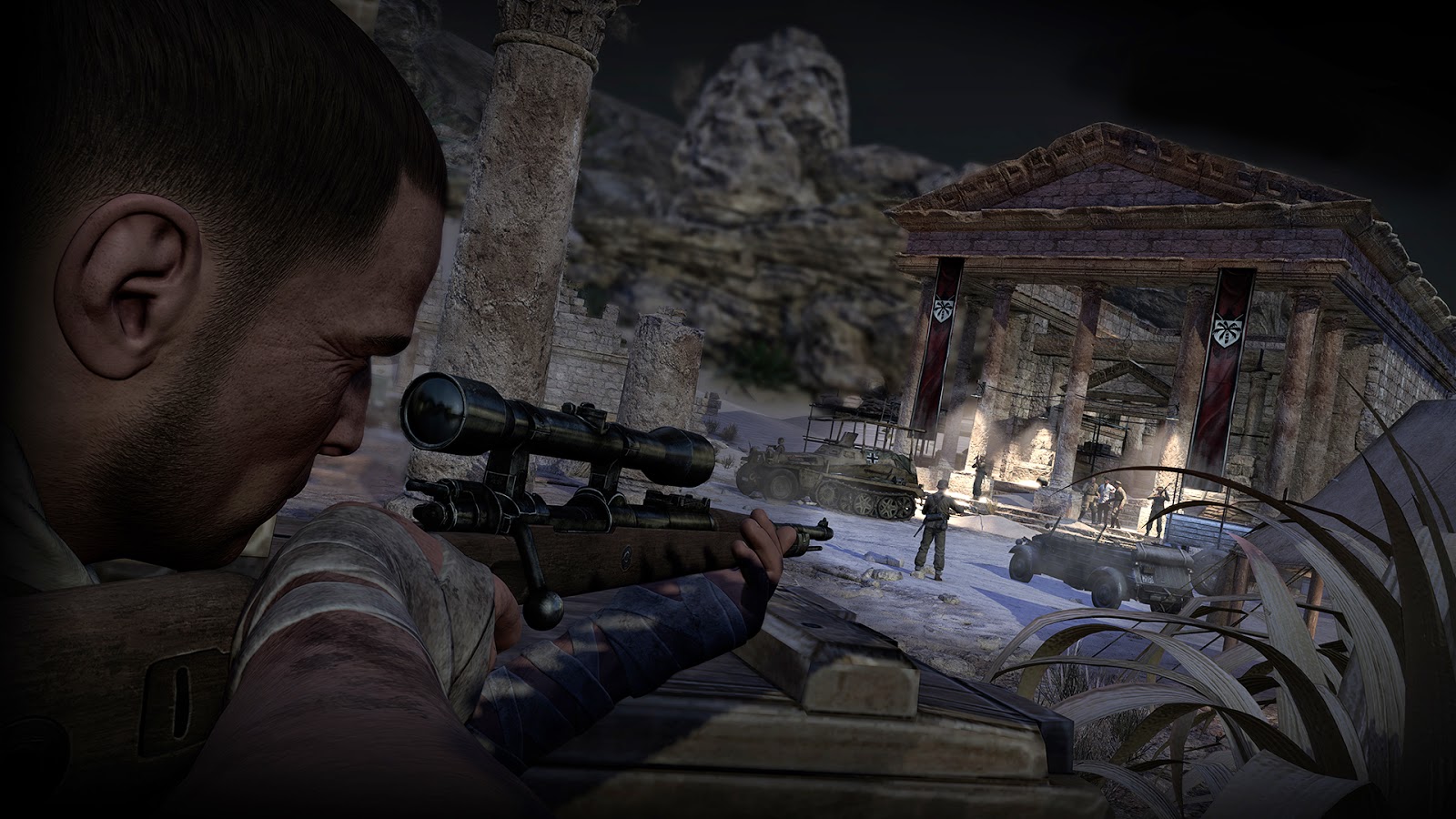 The end result of all this is a title that provides an engaging single player campaign that rings in around ten hours to complete. The online multiplayer and co-op modes add some extra value to the package. It’s perhaps not of a same standard as other shooters out there, but I enjoyed my time in the game. Then again I pick the sniper sets in other shooter games, so it’s almost like Sniper Elite III is designed specifically with me in mind.

If you happened to play Sniper Elite V2, you already have a good idea of how Sniper Elite III plays – but this latest iteration does everything a bit better. With less than a dozen maps, relatively lacklustre story and questionable enemy AI, Sniper Elite III is a flawed but enjoyable game nonetheless.