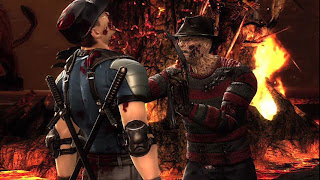 The wildly successful reboot of the legendary Mortal Kombat franchise was initially refused classification in Australia. Too violent and all that. So, believe it or not, this release of the Komplete edition is the first opportunity that many Australians have had to play the game.

Sadly, a release date just weeks after Injustice shows that this game is already aging, and the “free” DLC built into the game’s budget price just isn’t enough to save it now that Batman, Superman and friends have taken the party elsewhere.

Functionally this is the same game as Injustice (or, more accurately Injustice is the same game as this, but again, in Australia Mortal Kombat came second). Fights take place on a 2D arena and the combat’s most notable feature is the fact that it is utterly brutal. The impacts of virtually any attack is accompanied by a heavy crack. With the super attacks players are even treated to an X-ray cut scene where they will see bones shattering and organs being pierced. 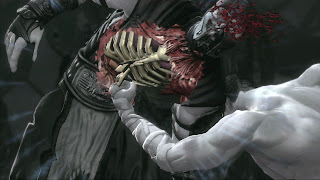 And of course there’s the fatalities. Oh, those fatalities. Throw in the stunning, but extreme environments that build a 80’s style B-grade Gothic horror atmosphere, and yes, I do understand why this game was rated R18+ after being initially refused classification. This is not a game I want to see children playing. Freddy Krueger and Kratos are in the game for a good reason (the best DLC cross-over characters ever in a fighting game).

The problem with the Mortal Kombat games has always been that once you get through that initial shock factor, and once those fatalities stop being anything but a way to finish a bout, there hasn’t been much to keep players coming back until they’re experts. It’s the same with this game. Much like Injustice, combo systems are limited compared to some of the Japanese fighting games, and it’s just a little too easy to find a character with a near-unblockable attack sequence. And, like Injustice, there are some balancing issues; let’s just say that if I was to head online with some of my favourite characters I would have a pretty bad time of it. 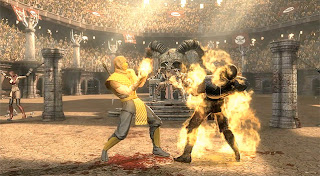 Unlike Injustice, there is a dedicated block button in Mortal Kombat. However on the PlayStation 3 it is mapped to a trigger button. That tiny resistance and delay to push down on the trigger button is just enough to my rhythm… or perhaps I’ve just spoiled with having the block button in such an ergonomic place with Dead or Alive 5. Either way, this game goes out of its way to encourage me to be aggressive rather than strategic – to the point where in local multiplayer I had more fun button mashing until my fingers got tired.

Mortal Kombat will likely be my least-played local multiplayer game too. Compared to some of my other fighting games – PlayStation All Stars Battle Royale, Dead or Alive 5 and Injustice, Mortal Kombat’s cast are harder to like. A relic from its early days, most of the characters look like palette swaps; Noob Saibot may as well be Scorpion. Kitania might as well be one of those other women with face masks. With a few exceptions there just isn’t the same thrill to picking out a favourite, and I suspect outside of the basic dozen or so who have been around since the series began and the DLC folks most players won’t care that the roster is so large. And, let’s face it, even Scorpion and Subzero can’t compare to a showdown between Superman and Batman. 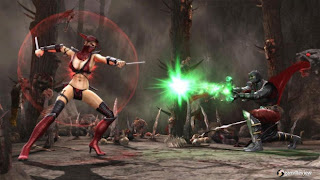 On the other hand as a single player fighting game, Mortal Kombat is great. It offers a really wonderful and entertaining story mode and the number of unlockables is insane. Outside of the story mode is a standard “move up the ladder to the end boss” single player game and that works fine except for the ridiculously difficult final battle. There’s a couple of variations in there too which are worth exploring.

Prior to the release of Injustice I would have joined the chorus of critics in the rest of the world who loved the rebooted Mortal Kombat back when it was first released. But consumers in Australia have been given the option of this, or Injustice. The games play so similar to one another that it’s impossible to recommend picking up both and, well, Warner Brothers’ character mashup has character and license advantages that Mortal Kombat just cannot compete with.

Some killer screens from Killer is Dead