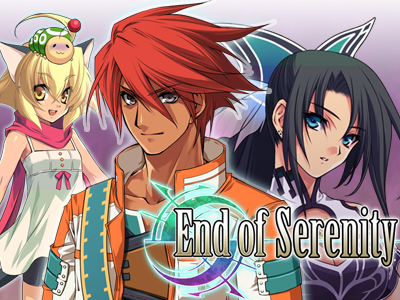 It takes only a handful of screenshots to ascertain End of Serenity’s role as a retro-style, Final Fantasy clone. As yet another JRPG being released late in the aging PSP’s life, it doesn’t exactly have grand expectations riding on its shoulders. That lack of hype is probably fortuitous because End of Serenity offers little we haven’t seen before.

End of Serenity isn’t devoid of charm, mind you. Despite production values that wouldn’t look out of place in a homemade RPG Maker game and petite sprites that look poor on the PSP’s display, this is very much a game that captures the raw spirit of the original Final Fantasy. From the 16-bit visual aesthetics to the game’s structure, it’s clearly designed after the classics. Considering most genre fans have likely played the original Final Fantasy to death through the countless ports and remakes, there are certainly worse formulas to ape and apply to fresher contexts. 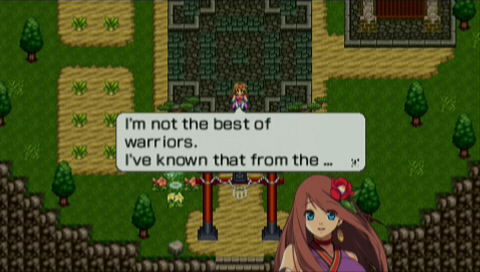 The game itself is rarely anything more complex than fighting off wards of foes on the world map, travelling from one town to the next, and grabbing the next tier of equipment or some snazzier spell equivalents, but it’s able to hold your attention for when the boss bouts arrive. Even these epic encounters don’t require a great deal of intellect since the player levels up so fast that raw power and healing can get the job done, but the higher stakes and lengthier exchanges add some much-needed intensity when appropriate.

The developers do occasionally throw in neat little screwballs, such as segments where the party must liberate towns from thugs or the perspective switches to a character elsewhere. These situations never add the strategic depth that the genre’s modern equivalents deliver in spades, but End of Serenity’s experimental moments make for pleasant diversions all the same whilst granting the game its own identity.
Some might call it a toned down, easier interpretations of Square Enix’s aforementioned classic since there’s an incessant focus on advancing the game’s very linear plot and there may be some truth to that. Exploration is an illusion in most JRPGs to begin with, but here it’s almost nonexistent. Oftentimes the path forward is forwardly expressed to the player and the world map is designed in such a manner that it’s obvious which direction will advance the story. 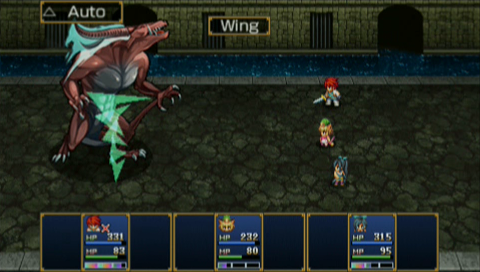 The script driving that story along is by no means outstanding, relying on many overused tropes and ham-handed dialogue that belies the gravity of serious situations, but at times this almost feels like an intentional throwback. The townsfolk babble is especially amusing at times given how blunt the characters can be. That said, fans willing to overlook the quirks will come to appreciate the game’s cast and their interactions throughout the journey regardless.
To the game’s credit, too, it’s a very brief experience compared to the rest of the genre. You can see much of what the game has to offer comfortably under a dozen hours. Some like their JRPGs long and deep, but the short length works brilliantly for this retro-style game and keeps it consistently interesting throughout to disguise the overall straightforwardness. There’s never, ever a need for grinding, which I’m not about to object to.
As I mentioned earlier, the world map is hardly an exciting land to roam. That’s not entirely due to the placement of towns and dungeons, however. The game uses microtransactions to unlock bonus content dispersed throughout the overworld. You’ll frequently encounter zones that you can’t access without points that can be purchased with real-life cash. If you want sidequests, this is how you’re going to get the majority of them. 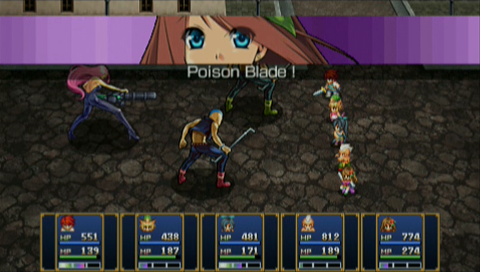 I’d like to think price shouldn’t factor into a game’s quality much, but considering this game costs roughly double the price of iPhone original release and is more expensive than some of PSN’s finest JRPGs before any DLC is involved, it’s safe to say the paid bonus content could have been integrated in a less exploitative manner.
End of Serenity is proficient as an homage to the genre’s earlier days, even if it lacks standout qualities and often feels like it’s going through the motions. That’s not necessarily objectionable for a game of this scope, but once tagged with a higher price point and a paid DLC model that feels intrusive, the lack of depth feels less excusable.