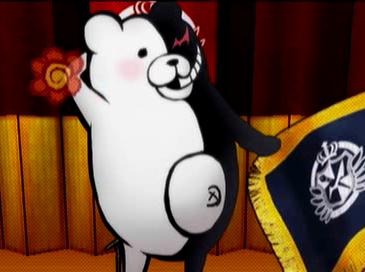 Game Theory is a regular column in which I take the opportunity to take a truly great game, and discuss some of its more philosophical underpinnings which are, to my mind, what truly separates these games from their peers.

Please note that the Game Theory columns do contain spoilers, otherwise it would be impossible to discuss some of the themes in these games. So if you read on and haven’t finished the game yet, please don’t blame me. I’ve just warned you, after all.

This week we’ll take a look at the “villain” of Danganronpa; the robot bear, Monokuma. Or is he actually a villain at all?

(You can also read our review of the game here)

Danganronpa’s Monokuma is, of course, not real. He’s a symbol. He’s a robotic bear behaving at the behest of the game’s actual human antagonist, and consequently he is the unthinking puppet at the centre of the nightmare that all the other characters are trying to survive through. And yet, as the game drew to a close, and both puppet and puppet master received their end fate, I – who had by this point spent 25 hours playing it to completion over a single weekend – had become emotionally engaged in the overall narrative, and yes, I felt sorry for their fate. To me, this dynamic duo were at the centre of a genuine philosophical melting pot that had been completely messing with my brain. 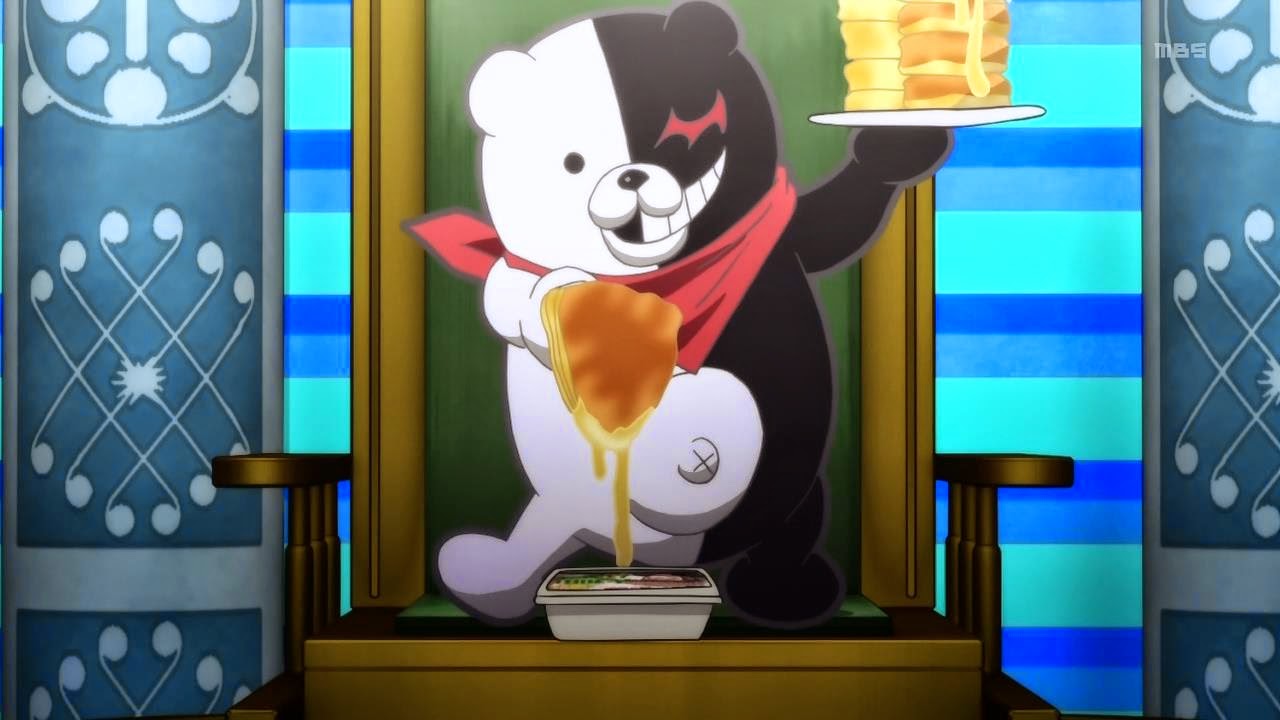 Yes, I felt sympathy for Monokuma, the diminutive mechanical monster that had, for 90 per cent of the game, been terrorising the protagonists and forcing them to tortures and murder one another. When one character committed suicide, Monokuma was blamed for being responsible, and he actively provided endless temptations to other characters to kill one another. He most certainly did not play fair within the elaborate Game Theory scenario that his master had concocted (hah, you all knew eventually I’d work the actual Game Theory into a column called Game Theory, right?). And for 90 per cent of the game before the real villain made herself known, Monokuma was a source of both fear and loathing for the characters, and every time he popped up we as players knew that something bad was about to happen.

So why did I feel sympathy for Monokuma (and, of course, the villain herself)? There’s a couple of immediate hints that I’d draw attention to that Monokuma is perhaps not the real enemy in Danganronpa. The first is the visual design of Monokuma himself – half pure, white bear, and the other half the kind of psychopathic monster that you’d expect to find in a child’s closet. This visual motif clearly suggests a duality in Monokuma’s narrative role. The developers quite cleverly resisted the temptation to spell out the reason Monokuma was designed that way – in fact his design is never even mentioned in the plot – but it’s a clear marker to look for further meaning within the character.

A second clue is the inspiration from the developers themselves. Danganronpa’s producer, Yoshinori Terasawa, was openly inspired by the Saw films. These are films that are often derided as being B-grade horror films, and for the later films in the series, this is certainly true, but the original Saw film was itself a genius work of moral complexity that borrowed heavily from the Jean-Paul Sartre school of existentialist thinking. It’s quickly evident from the quality of the plot and the wealth of ideas at work in Danganronpa that the game takes after the earlier Saw films, before they became an excuse to try and set new records for gore on screen.

Sartre was not just a philosopher, he was a playwright, and one of his most famous works is No Exit, a 1944 work that depicted three deceased characters being punished for eternity by being locked into a room together without escape. You might have heard of the quote “Hell is other people”… it comes from this play. The play itself is an enactment of Sartre’s philosophy behind the Look – the idea that the presence of another person can cause an individual to look at him or herself as an object, and see his or her world as it appears to the other; in other words, it’s a philosophy that recognises that there is subjectivity in how people view the world, but the only way we can understand our place in it is to understand how other people see us.

No Exit, Saw, and Danganronpa, all share similar setups; individuals are locked within hostile environments with no immediate avenue to escape. There, they have their sense of humanity and morality tested, and are forced into making difficult decisions in order to affirm what it is about life that is important to them. The need that the characters in all of these works have to step outside of themselves and understand the way the world views their interactions with it, and the way the respond to that revelation, leads to the character either being punished or saved. And, just as it is Jigsaw that forces the victims in Saw to confront their or mortality and morality, it is Monokuma that does the same with the range of character archtypes in Danganronpa.

Each character has a title in Danganronpa – the super athlete, the super tough-guy biker, the super “lucky” person (the protagonist), the super idol – and these characters have these titles not because they were the best in their respective fields prior to being imprisoned (after all, they’re all kids), but rather because these characters each represent a single social function or role, and by isolating these people into an enclosed space and throwing away the key Monokuma’s puppet master is able to watch as these social conflicts and prejudices are played out before her. 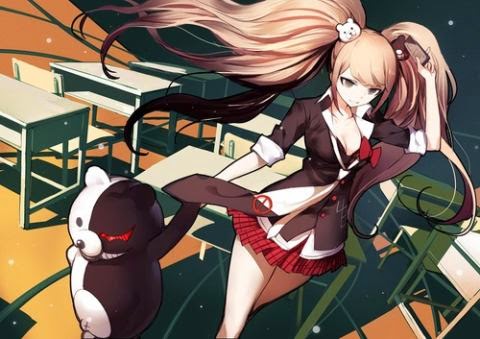 And as the body count grows it’s easy to look at the sardonic, sarcastic face of Monokuma and hate “him” for everything that he’s doing to these poor, innocent, kids.

That’s where every idea that Monokuma is a villain comes crashing down. A distinctly honourable streak runs through Monokuma and his puppet master; he’ll tempt each of the characters into doing the wrong thing and murdering one another. He’ll even threaten them. But he never forces them to do anything. Time and time again we are told that if no one kills anyone, then everyone gets to live in harmony. It is the character’s own weaknesses that lead them into doing evil, and Monokuma subsequently “punishes” (executes) them for breaking the odd kind of utopia that he’s offering them.

As Sartre once wrote in Being and Nothingness (1943): “Man is condemned to be free; because once thrown into the world, he is responsible for everything he does.” Monokuma is not responsible for anything that happens in Danganronpa. He provides the structure for the horror that will unfold, and throws in incentives for humans to indulge their instincts, but he acts as nothing more than a mirror, showing us, as players, the weaknesses of humankind and human society. 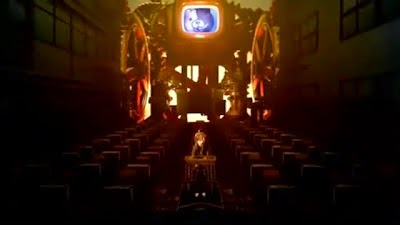 And as such, Monokuma is perhaps closer to a symbol of moral righteousness than villainy. In that context, he’s oddly endearing, as the sarcasm and borderline behaviour almost comes across as simple, sheer frustration with the puppet master’s perceived wrongs in the world. In an odd kind of way, the world that the two have imprisoned the other characters in then stops being an extended attempt at torture, and instead becomes an ultimately doomed attempt at providing a utopia and protecting these beacons of humankind from the evils of the outside world.

And equally oddly, with that realisation, Monokuma becomes a kind of hero.

Danganronpa 2; “more of the same” never sounded so good