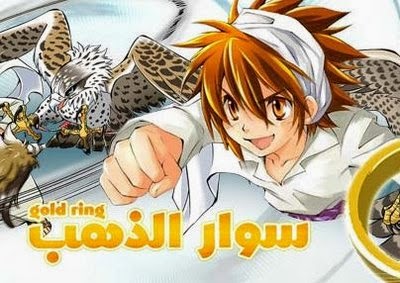 It might not be as outlandish as last week’s announcement that Twitter graphic novel Ninja Slayer is receiving an anime adaptation, but another comic will be making its transition into the anime medium. This time it’s Gold Ring, a children’s series that originates from the United Arab Emirates.
Gold Ring’s author, Qais Sedki, has been penning the series since 2006. Centering on the relatively uncharted theme of falconry, the comic would go on to win the Sheikh Zaued Book Award for children’s literature back in 2010.
As you can tell by the image above, the comic’s artwork has a distinctly Japanese feel. This is thanks to Akira Himekawa handling Gold Ring’s illustrations. The mangaka duo is no stranger to the industry, having been involved in the Legend of Zelda manga series and many others for over a decade now, but Gold Ring is notable for its international creative process. Himekawa and Sedki have coordinated their efforts thus far through the aid of translators.

Details are scarce at this stage, unfortunately, as Himekawa stated that the project is still in the initial planning phase. We do know that it will be overseen by Gainax (the same studio responsible for the production of FLCL, Gurren Lagann, and Panty & Stocking with Garterbelt), however.

Review: Atelier Rorona Plus: The Alchemist of Arland (PlayStation Vita)