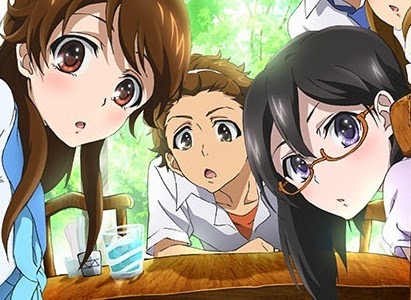 Touko Fukami and her four friends watch the fireworks and lament over how it’s their final year of high school. Touko’s family runs a glass-blowing business and aside from that, there’s not much which sets her aside from other anime protagonists. She’s optimistic and energetic, but also impulsive and prone to rash decisions. Soon, Touko is introduced to Okikura, a stoic boy who scares her off with his bluntness, and this meeting sets the scene for the events that will unfold in Glasslip.

There’s not a lot which happens in the first episode, which worries me about the pacing of this anime. It’s another original series from PA Works, a studio with a high pedigree for art and music and boasting a track record filled with high budget slice-of-life dramas. Their laid back style, attention to detail and focus on deep characterisation makes them a studio to keep an eye on. Last season PA Works wowed audiences with Nagi No Asukara’s breathtaking oceanic expanses, and not a lot has changed since then.

Unsurprisingly, a lot of the first episode is spent on gorgeous art depicting Glasslip’s bustling port town. Perhaps a little too much even – I felt that as enthralling as the setting was, the characterisation was lost in the meantime. The fireworks festival attracted a lot of attention from the artists too, animating the explosions so carefully that the episode itself is merely titled “Fireworks”. Hopefully the next episode, “Bench”, doesn’t follow the same path. 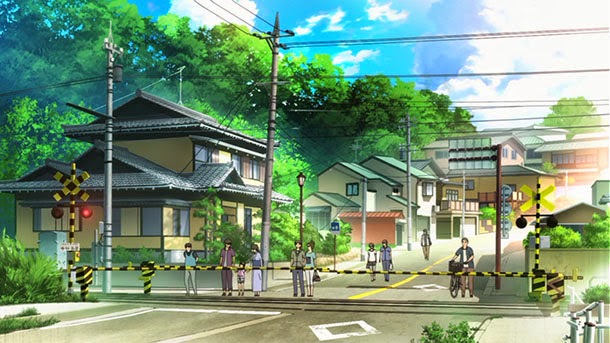 Altogether, I felt that the script in Glasslip is a touch weaker than what I’ve come to expect from this studio. Perhaps it’s the premise that Touko and her friends are already well acquainted, but the audience is not introduced to the main cast well in this first episode and I struggled to recall even the names of the characters afterwards. The dynamic of the friendship also doesn’t feel too natural, with some lines sounding rougher than how a conversation in real life would flow.

The preview suggests that the standard romance plots and character drama is soon to follow, but I wouldn’t be surprised if Glasslip stays on the soft side. The art style is so faded and gentle that I can’t imagine anything tragic happening in this universe. Slice of life enthusiasts will be accustomed to this lack of conflict already, but at least there seems to be some continuity to give the plot direction.

Unfortunately, this results in an anime which overall feels unambitious. There’s very little unique to Glasslip, and the glass working itself is barely shown in both the episodes and the promos. For fans wanting a break from outlandish action, Glasslip might provide good comfort but I expect the quiet port town will be too mundane for others.

Akiba’s Trip: Undead and Undressed tears up Europe on October 10