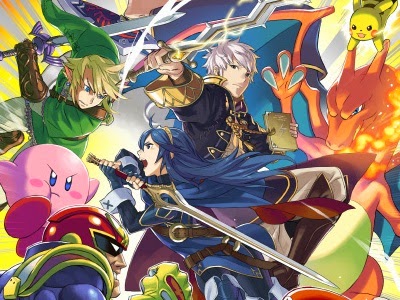 Nintendo held a live stream on the official Super Smash Bros. website today in which it revealed three playable characters for the upcoming Wii U and 3DS editions of the popular party fighter.

The cinematics shown heavily emphasised the Fire Emblem franchise. Two newcomers from that series were shown off; Lucina and Robin. Veteran fighter Captain Falcon wasn’t far off, though, marking his fourth appearance since the original Super Smash Bros. for the Nintendo 64. Captain Falcon looks to be his usual nimble but brawny self and Lucina promises to bring more of the sword-swinging action we’ve become accustomed to.
Robin, however, offers an exciting new play style not seen in the series previously. In addition to an element-based Levin Sword, the tactician is well-versed in tome usage and capable of firing off powerful spells such as Arcthunder, Nosferatu, and Elwind. The micromanagement from the Fire Emblem games has also been subtly reflected in Robin’s character; tomes will have a limited number of uses. Like Animal Crossing’s Villager and the Wii Fit Trainer, Robin can be gender swapped at the player’s discretion.
Fire Emblem Awakening’s main Lord, Chrom, was also showcased but will not be playable on his own in this installment. Instead, he’ll be integrated into Robin’s Final Smash (a super move activated by breaking open the Smash Ball item), accentuating knockouts with some vicious Falchion slices.
We rather enjoyed Fire Emblem Awakening when its English localisations hit the 3DS last year, to the extent that we reviewed it three times and bestowed it with our 3DS Game of the Year award. You can bet we’re thrilled to see that Fire Emblem is getting some serious representation in the form of four playable characters (Marth, Ike, Lucina, and Robin), especially as two of them made their debut in Awakening.
Check out the reveal trailer below, which heavily features Robin’s antics:
By the way, if you haven’t been keeping track of the character count, there are now a whopping 36 playable fighters confirmed for Super Smash Bros. (potentially 37 if you wish to count Mr. Game and Watch as he was depicted alongside Pac-Man’s reveal but not announced on the Smash Bros. website). While Super Smash Bros. Brawl had more playable characters via alternate forms, its number of individual fighters has now been surpassed and there are still more in the pipeline.

We also found out today that Ubisoft’s Rayman will be featured as a trophy in both Smash games. Whether that’s the extent of his participation (and Ubisoft’s in general) is unclear.

The 3DS version of the game is slated for an October 3rd release whilst the Wii U edition arrives closer to Christmas.
– Clark A.
Anime Editor
Email me at: clarka@digitallydownloaded.net
Share this