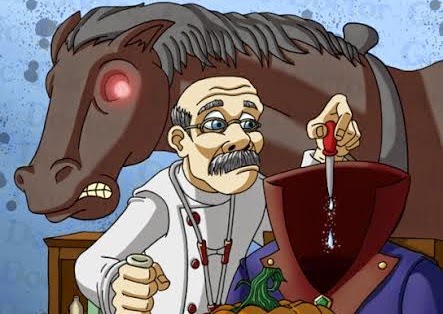 Do you remember a time when vampires were evil men in scary cloaks rather than square-jawed teenagers with an iron deficiency? If so, Gothic Doctor could be the game for you. It’s a lighthearted card game with a fabulous theme and some terrific art, and it needs your help on Kickstarter.

The premise of the game takes you back to Victorian London, an age of bodysnatchers, pea-soupers and things that go bump in the night. As MD to the city’s monstrous residents, it’s your task to make as much money from treating sick beasties as a single 11-hour night will allow. Patients range from commonplace witches and spectres though to legendary characters like The Bride of Dracula and The Headless Horseman. Here’s the game’s first big decision: do you focus on high-volume, low-profit customers, or hold out for the big name monstrosities? The more notorious patients are worth more money, but they’re also harder to treat.

The game is for 2 to 4 players, and involves a range of action cards, treatment cards and special bonuses. Each patient requires a specific set of cures, and these are provided by the treatment cards which held by the player. A further consideration comes from the bonus cards, which provide extra money if players specialise in one particular branch of ghoulish medicine. Finally, action cards can be played to spice up the rules and make life difficult for your opponents. He who treats monsters becomes a monster himself, as somebody once said. (Probably). 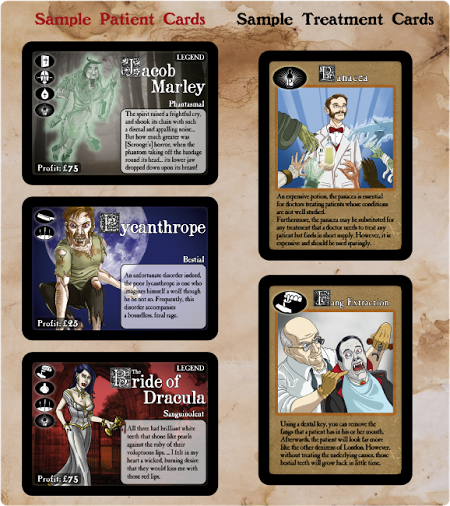 We haven’t yet had the opportunity to give Gothic Doctor a full road-test, but don’t let that stop you. A free print-and-play version is already available on the Meltdown Games website (www.meltdowngames.com) and, although it uses placeholder art, it’s enough to give you an idea of whether the game works for you. The final artwork is lovely though, with overtones of classic Scooby Doo, so there’s a clear advantage to backing the project and getting a set of professionally printed cards.

The funding target is modest – Meltdown last tried a Kickstarter in 2013, and they’ve learned valuable lessons from it – so there’s every chance that this game will get made. The Kickstarter tiers also seem very reasonable for a card game, although there’s international shipping to consider if you’re outside the US. The campaign starts at 10am on Tuesday 1st July, and fans of real, physical games played against real, physical people should definitely check it out.

You can back the Kickstarter here.