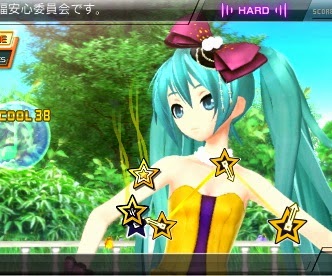 Rhythm game, Hatsune Miku: Project Diva f absolutely took me by storm when it was released earlier this year. It was challenging, it had great music, and Hatsune Miku is a star.

The E3 trailer for the sequel promises pretty much the same thing, but I’m really not complaining. With 40 tracks, there will be plenty to play through again, and I’m sure that SEGA has been busy putting some small enhancements in to get me tapping along to all hours all over again.

This game releases later this year, for both PlayStation 3 and PlayStation Vita. Personally I’d be recommending the Vita version, since the previous game was just perfect for pick up and play.