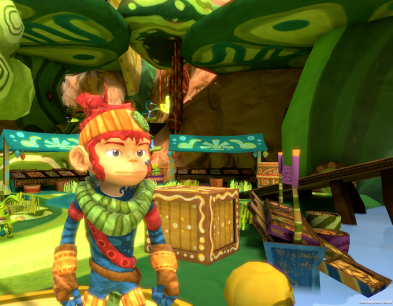 So, let’s talk about The Last Tinker 64… wait, that’s not quite right. It’s called The Last Tinker: City of Colors, but from start to finish this game does feel like a giant homage to the games of the Nintendo 64 era. It’s a beautifully designed adventure game that is wonderfully lathered in layers of nostalgia.

Normally when a game is called cute people don’t overly seem to take it seriously at first, or they go ahead and make the assumption that it’s a kids game. The best example would be to look at Spyro and we all know how awesome that was. The Last Tinker, ladies and gentlemen, is cute! And it’s definitely more than a kids game.

The concept for the game is that Colortown has been literally divided into pieces, and the residents of each suburb want nothing to do with one another. The only portion left generally untouched by this sentiment is the marketplace where Koru and his best friend (a flying piñata-like thing) live. The game starts off the day of a big race however due to the segregation of the colours, a fee is now imposed and if Koru wants to participate he will have to earn a few crystals (the currency of this town) to pay his way in. This acts as a charming little tutorial system and is an excuse to get players familiar with the environment via exploration. 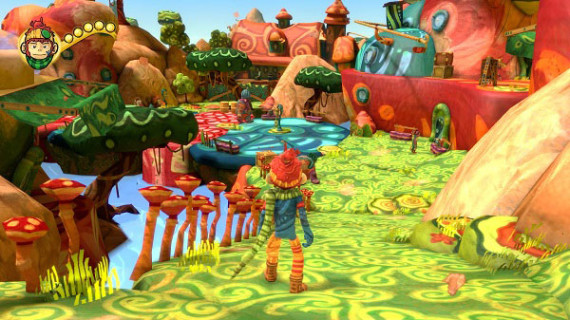 The tutorial process will also introduce you to the combat, which feels entirely tacked on. Koru starts off with a five hit combo that follows a one-two one-two punch pattern followed by an epic leap of a smash kick. Dodging is available and the distance of the dodge is pretty impressive – I often directed Koru into the water for a quick dip by misjudging just how far he would move in a dodge. This all works ok, but the disappointment is that that enemies were actually no threat at, and given how well everything is put together, this is a wasted opportunity.

Later on the variety of enemies improves, and the dodge mechanic starts to make sense. It’s then that the whole system almost starts to make sense; with the enemies growing stronger and more versatile and Koru is introduced to a vending machine where new abilities and upgrades can be purchased. Between these new moves and the different fighting styles of the enemies combat eventually starts to feel like part of the experience, without ever really comparing to the platforming and exploration side of things.

There’s a dash of puzzle solving thrown in too, as Koru is accompanied by two mushroom creatures; Biggs and Bomber. Biggs is a large mushroom that can be used to pound down on switches, run through hordes of enemies and large web walls as well as re-colour bleak surfaces. Bomber can be used to blow up fallen rocks, bullrush enemies and cracked walls, and literally cry enemies to death. 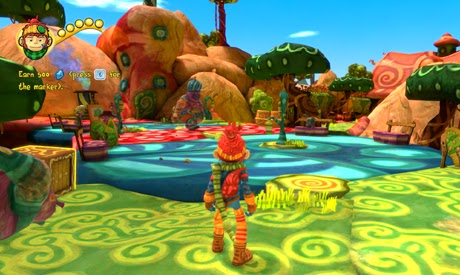 Fitting in with these two elements is the ability to run around, swing off of poles, climb up ladders and ropes, hop across octopus tentacles, crates, and rocks, and slide or jump up and down cargo rails at high velocities. Koru is quite dexterous and there’s generally not many places that he can’t go when he sees something interesting. Not only are the environments general amazing to look at, but they are also amazing to run through and there are often times when there are multiples ways to get from A to B. Having that option was really nice as it helps create that more organic world instead of absolutely having to achieve objectives in only one way.

Story in adventure games has always been a hit and miss as the balance can be quite hard to peg down at times. Has enough story exposition sequences dialogue been put in? Are audiences going to get bored from sitting around watching hour upon hour of cut scenes? The Last Tinker strikes that balance perfectly and the game offers enough story without ever becoming dull. The dialogue is friendly, well written, and offers up plenty of personality. My only criticism is that there isn’t an option that allows for an auto-play of the text, and the incessant clicking can become irritating as a result.

The Last Tinker is an engaging and brilliant game. From a cheerful narrative with pleasant dialogue, to the amazing feats of dexterity and prowess of Koru, and even, eventually, in the combat, the game continues to impress from start to finish with consistent and clean quality making and production values.