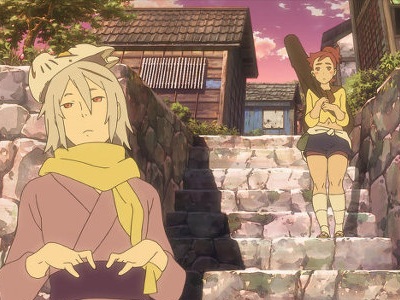 Fusé: Memoirs of a Huntress (Fuse: Teppou Musume no Torimonochou) takes place in Japan during an era that is alien to most audiences. Its narrative, too, is partly based on a Japanese work of fiction that spans over a hundred volumes. You can imagine my shock upon hearing NIS America would risk publishing a niche anime movie that is so culturally dependant, but my reservations seem unwarranted in retrospect. Memoirs of a Huntress is foreign, but it’s executed in a manner that is quite inclusive and informative.

Set in Japan’s Tokugawa period, Memoirs of a Huntress focuses on a fourteen year old huntress named Hamaji. Following the bereavement of her grandfather, she escapes the boondocks to take up residence with her older brother. Her journey from the country to the town provides a clever excuse for the writers to illuminate aspects of Edo-era culture without it coming across as contrived. She also stumbles into Shino, a masked dog-human crossbreed referred to as a Fusé. Being a huntress by trade and due to her brother’s influence, Hamaji is inclined to hunt the remaining Fusé.
The relationship between Shino and Hamaji is striking, and poignant to watch unfold throughout the film’s running time. Hamaji is a human who embraces her primitive side as a huntress intent on slaying the Fusé to make a living. Shino, meanwhile, is a depicted as a vicious animal bearing very human tendencies from empathy to self-restraint. Despite their positions – the huntress and the hunted – there’s never a hint of animosity towards the other. 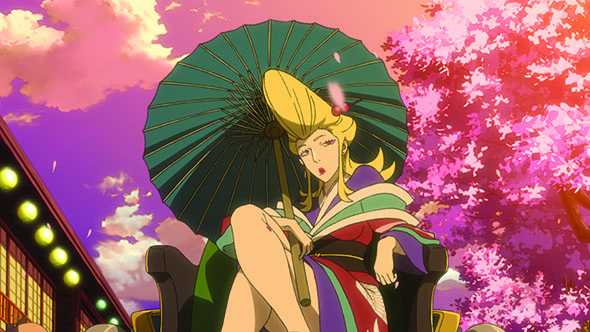 The fact that they’re so sympathetic and curious about the other’s position is what makes this dynamic deeper than the average nature-oriented flick’s explicit message that humans are sabotaging the animal kingdom for personal gain. Memoirs of a Huntress offers no definitive answer regarding which side is “right”, electing to merely explore the symbiotic relationships between species and pose all the right questions.
Notwithstanding their roles as emissaries for their species, Shino is integral to Hamaji’s ongoing shift from young tomboy to woman, serving as a catalyst for her to embrace her feminine side in a society that disallows huntresses. Plenty of crafty symbolism accompanies this transition along the way and none of her character is sacrificed in the pursuit of progression. By the end, Hamaji is able to repay his gestures tenfold in a manner that befits their relationships, abstract and as friends, to bring things full circle.
The film isn’t reliant on depicting much actual “hunting” per se, but the action scenes that do transpire are gruesome ones with copious amounts of dismemberment and crimson spills. Most deaths serve a purpose beyond appeasing the bloodthirsty, too. They’re thoroughly disconcerting and, fittingly, captured with lifeless shots to directly juxtapose the stunning beauty of nature that the film goes out of its way to showcase with a multitude of camera angles. The ugliness inherent in taking a creature’s life – human, animal, or Fusé – is articulated whilst scarcely going off on pseudo-philosophical tangent designed to instruct your emotions. 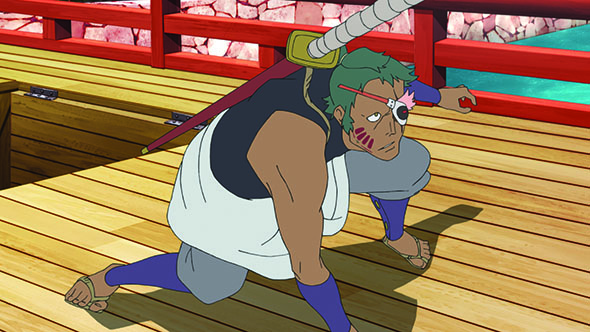 The Edo setting wasn’t selected solely to provide immersion in the film’s beguiling, Studio Ghibli-esque landscapes either; it’s instrumental in parsing several plot points. The components that characterised the era from austere social order to the popular consumption of the arts all wind up being germane. Societal isolation is a major theme too, with Fusé being publicly viewed as repulsive harbingers in accordance with the government’s wishes, regardless of the ways they’ve clearly adapted to the culture and are actually appreciated by the populace before their identities are exposed.
I won’t delve too deeply into the lore in the interest of preserving the suspense of the reveal, but there are several links to Kyokutei Bakin’s aforementioned Nansō Satomi Hakkenden as well. Granted, the film is no clear-cut interpretation of the story either (which would be a tad challenging for a 100+ volume series), instead assimilating certain aspects into its mythos. This is particularly conspicuous when it comes to the Fusé. Whereas the samurai in Hakkenden were often depicted as heroic in a sense, the Fusé are considerably more primal and functionally reminiscent of werewolves. It’s an element that fits in perfectly with the Edo setting chronologically and ingeniously binds together much of the subject matter.
All these themes tie up impressively well with an ending that can be perceived as noir or blissful, hinging on the viewer’s perspective. That leniency for interpretation is ultimately Memoirs of a Huntress’ greatest virtue and its Achilles’ heel with regards to appeal. Some audiences will take issue with the film’s stylistic ambiguity. Certain elements go unexplained entirely, such as whether the Fusé need to consume humans for survival. There’s one scene early on where Hamaji is repulsed by the dog-like head of a Fusé being displayed in public, just minutes after her hunting down a dog and enjoying her prey with considerable enthusiasm. These moments can be expounded through speculation and analysis of plot points and character mannerisms, but many will consider the handfuls of similar scenarios littered throughout to be jarring. 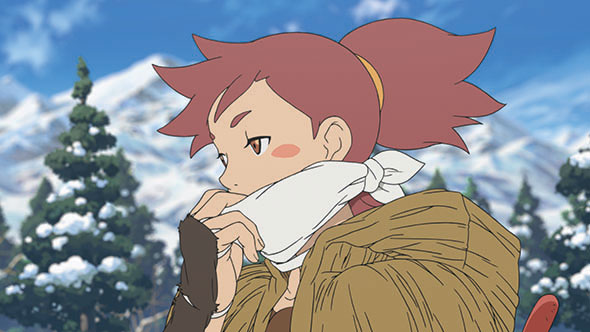 What isn’t jarring is how generally accessible this film is, though. Culturally sensitive material is largely explained outright and the gaps that remain are filled sufficiently with conjecture or a series of brief Google searches. It definitely becomes weightier when you can parse the context of course, but Memoirs of a Huntress goes down well as a casual viewing so long as the viewer is open-minded.
The premium box set containing Memoirs of a Huntress is comparable to the one that accompanied NIS America’s other recent release, Nyaruko: Crawling With Love!. The key incongruity is its darker colour scheme and vertical display. A similar 32 page book is included too, though I’d wager the sober interviews and concept art will be markedly more valuable for the enthusiast than Nyaruko’s zaniness.
Fusé: Memoirs of a Huntress weaves such a rich array of themes into its two hour run time that you’ll be inclined to indulge in return trips. Its themes, however rooted in foreign history, are ones with unexpected social relevance to today’s watchers and a welcome change from the subjects we’ve come to expect from modern anime films.

Child of Light is coming to PlayStation Vita