Chess has never been a spectacle of a sport in the same way as other great games are but that hasn’t impeded its capacity to deliver high-stakes, strategic action over a period lengthier than a millennium. So given that Digitally Downloaded’s editor-in-chief has practically gushed over Ripstone’s Pure Chess at length several times, I was quite intrigued to see whether it could rejuvenate my childhood interest.

And based on what I’ve played and seen, I can agree with Matt’s assessment wholeheartedly. Pure Chess doesn’t push the envelope with dramatic, grandiose combat scenes or anything more experimental video game adaptations have strived for, but it doesn’t need to. It’s exactly what the title offers; pure chess, with a posh, sophisticated presentation that adds a layer of atmosphere to a classic.

With that said, Pure Chess on 3DS is a tad trickier to recommend. Initially its shortcomings seem as throwaway as some cramped menus and grainy text but the real issue surfaces upon engaging an opponent. The matches aren’t presented with a standard perspective like a bird’s eye view but instead an awkward diagonal one that is decidedly less effective in letting you follow the action. The camera can’t be manoeuvred by the player and any automatic movements are subtle, barely noticeable zooms.

This probably sounds like technical nitpicking, and I’m sure it is, but the impact is noticeable to the extent where something always felt slightly off to me (and I say that as someone who never played the other versions prior to this). Since you don’t control the pieces on the top screen anyway, it becomes significantly more practical to watch the vanilla 2D representations on the touch screen below rather than the high-quality but poorly presented action above.
This isn’t a deal-breaker by any means; it still looks pretty in 3D and it’s not as if the game of chess is no longer enjoyable because of it. It just marginalises one of Pure Chess’s primary virtues and something that all other iterations, portable or not, look to have delivered uncompromisingly. 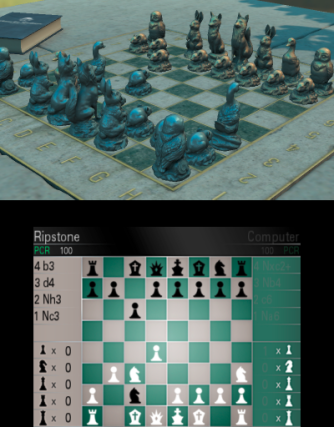 It also means that the extraneous downloadable pieces have comparatively low value since the designs of each piece are no longer the focus and the amount of time I spent watching them seemed to decrease each game. It’s disheartening to have all these varied chess pieces and backgrounds rendered mostly irrelevant by the viewpoint because, even in this far blander form, they manage to craft a strangely relaxing atmosphere that I can’t say I’ve ever experienced from another chess game. The refined classical music playing gently in the background rectifies things somewhat, but there is a certain personal touch about “owning” a nice chess set, and that’s denied to people who purchase the 3DS version of the game.
The core game of chess is still as compelling as ever, of course. After all, there’s indeed a reason why people have devised hundreds of strategies and written innumerable books despite being the game being relatively simple in ruleset. Even those who aren’t particularly savvy should find themselves enjoying the experience thanks to some optional tutorials and (usually) competent artificial intelligence for the computer opponents with customisable challenge levels.
The game’s big draw will be be the online multiplayer, which works reasonably well. Anyone who has played a board game like Scrabble on Facebook will be familiar with the format, which forgoes real-time games in favour of a play-by-email type structure. Opinions amongst chess aficionados whether it would have been better to have a real-time option will vary, but at the very least it’s a breath of fresh air to be liberated from the stress inherent in having to make a move before your real-life opponent gets frustrated. 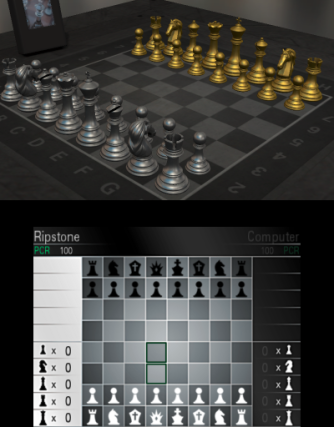 While I suspect most will get over the lack of real-time play (probably because it would be exceedingly inefficient on a portable system), most of Matt’s criticisms regarding the Wii U version apply here too. Not being notified outside of the game in some form when your opponent has made a move forces you to log in and check whether a turn is waiting for you, which is poor design for a play-by-email style game. The amount of loading required to get in and out of the online lobby makes the proposition of a daily “ten minutes of chess” regiment suddenly less attractive.
Pure Chess on 3DS boasts a decent presentation and plays far more competently than many other video game adaptations, but I suspect this port may be the poorest version yet of an immaculate experience. It still offers something quite special to those who only own a 3DS, but if you’ve got another platform with this game available on it, then I’d suggest you aim for that one instead.