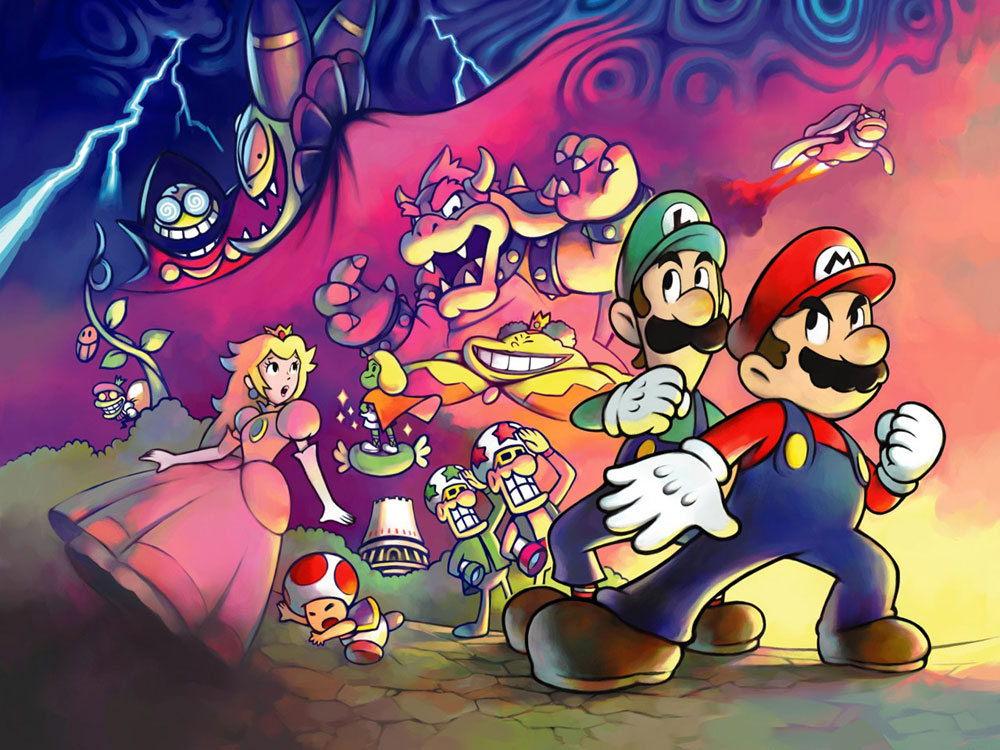 As much as I enjoy JRPGs, I recognize that certain audiences simply can’t bear their often turn-based battle systems and gratuitous playtimes. While some will never be persuaded by the genre, playing Mario & Luigi Superstar Saga again as of one of the Wii U’s premiere Game Boy Advance titles made me realise just how compelling a gateway drug it can be for those who generally prefer action games.

Of course, there are nearly a dozen Mario RPGs today and they’ve all infused action-based battle systems to various extents. What Mario & Luigi Superstar Saga achieves though, is a certain pacing and sense of adventure unmatched by any of them before or since.
(If you enjoy this and are looking for a modern take on the Mario RPG formula, check out Dream Team Bros.)
Most of its contemporaries, entertaining as they are, had plots that focused on collecting seven stars (or similar MacGuffins) that were outlined near each game’s introduction. Though this approach can validate wandering all ends of an expansive world map and make progress transparent to the player, it also makes the game’s length rather palpable and a factor that’s constantly weighing on the player’s mind. Fans of more immediate narratives will be more receptive to Superstar Saga’s plot flow, which is largely organic. While there is a central plot device that informs the overall experience, it’s not nearly as pivotal nor is there a chapter structure built around it to break the experience down into lengthy chunks.
Players are tossed into a foreign land beyond the Mushroom Kingdom and all the player truly knows is that there needs to be a final showdown against someone at some point. As your objectives along the way are firmly rooted in what you are doing right now, and the story is so delightfully askew, there’s this liberating vibe pretty much everyone can get into. To put it another way, this is a game that seems built for people that don’t typically play JRPGs. 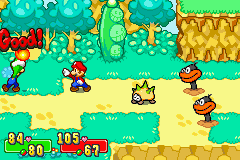 And that’s a great thing because Superstar Saga puts you on a roller coaster from its inception and demands your concentration each step of the way. The game is also refreshingly brief, which gels splendidly with the narrative’s brisk pace. Unlike many JRPGs that ultimately overstay their welcome in an effort to provide staying power, Superstar Saga can be completed comfortably in under 20 hours (and that’s a figure with some non-essential grinding and exploration factored in).
This in turn makes every battle seem more interesting and relevant. The combat system holds up its end by providing speedy menus and transitions as well as, in typical Mario RPG fashion, prioritising timed attacks and dodges. Battles are just the right blend of action and turn-based with none of the genre’s charm being sacrificed as a result.
More interesting still is that nearly every foe has a specific weakness or a strategy that derails their offence. While their patterns are frequently blatantly telegraphed, scoping out what makes an opponent tick is just another design tactic that the developers have used to keep the player focused on the task at hand. They’re also often delightfully silly. You’ll find yourself seeking out battles not purely for experience but out of sheer curiosity about what you might face down next. 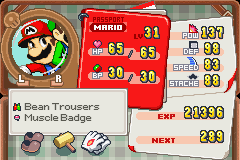 Beyond the battles and plot, almost everything Superstar Saga does is invigorating. The puzzles are well designed and spread all throughout locales that are wonderfully varied compared to another reinterpretation of the Mushroom Kingdom. Exploration, too, is rewarding and kept stimulating by Mario and Luigi’s many out of battle manoeuvres.
The game never forgets that it’s an RPG or pretends otherwise, but it owes a great deal to the action end of the spectrum. Activities that would be mundane in other titles become engaging thanks to increased interactivity with the world; you don’t pop open a chest to grab gold, you hit blocks rhythmically with both brothers to rack up as many coins as possible. The only real downtime occurs during some needlessly extensive tutorials and the occasional forced mini-game, though at least the latter can be surprisingly enjoyable at times.
Superstar Saga’s clever usage of the Mario property stands out as well. Though a great deal of foes are imaginative and exclusive to this game’s Bean Bean Kingdom, just as many are classic adversaries with beanish twists. Sometimes the solution to besting an enemy even lies in Mario’s past. For instance, you can destroy Viruses in battle by matching up their colours ala Dr. Mario. The occasional use of sidescrolling levels and remixes of classic franchise music help forge an experience that feels simultaneously nostalgic and fresh. 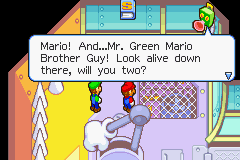 Superstar Saga’s only real “letdown” lies in the script and even then it’s more often brilliant than not. While it executes its humour reasonably well, later Mario RPGs would go on to incorporate a broader range of comedy instead of leaning chiefly on slapstick. With that being said it’s still very enjoyable journey despite this, as characters like Fawful are in line with Mario’s most memorable.
Few will argue that Mario & Luigi Superstar Saga excels at playing to what we generally consider to be the strengths of a JRPG; there’s no real depth to any character or a world crammed with lore. And yet, nearly every minute of Superstar Saga is stimulating in a manner that will absolutely appeal to just about everyone. Action fans will appreciate not being laboured with statistics and lengthy cut scenes, while JRPG fans seeking something less conventional will adore it too.

Trailer: Can The Evil Within bring us back classic survival horror?