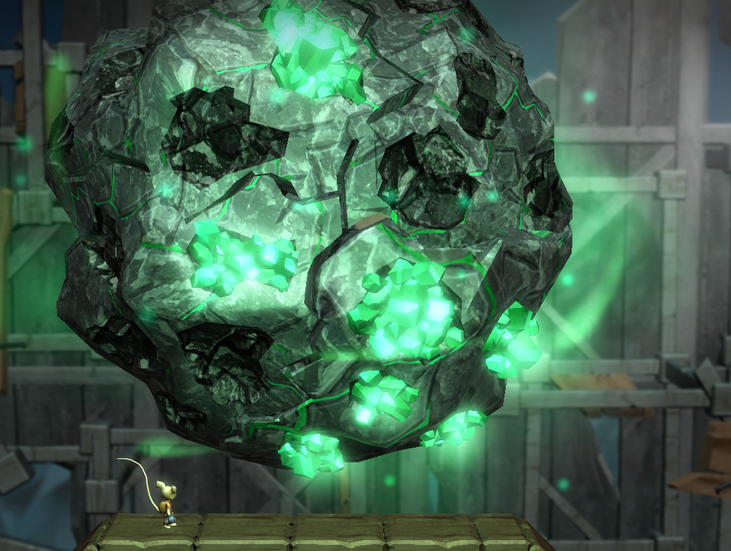 The game starts off with Ethan’s house being destroyed by a meteor crashing into it. His neighbour who seems like a very unfriendly sort starts to point and laugh and as he does Ethan, who is getting even more upset (I mean come on, the poor mouse just lost his house), realises that he has somehow been granted abilities from the meteor and unceremoniously dumps a pile of rubble on top of his neighbour. This seemed a tad petty but then again if my house was just destroyed by a falling hunk of magic space rock and my neighbour was laughing at me, I wouldn’t be too happy either. This brief scene sets the mood of the game as an adventure where very little is going to be friendly towards Ethan. Once revenge has been served, the platforming begins. 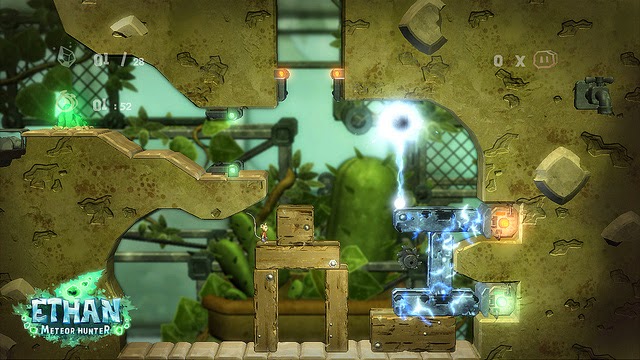 Ethan: Meteor Hunter is a 2D puzzle-platformer that can be interesting, frustrating, and innovative at the same time. The styles of traps that need to be navigated around range from flamethrowers and spikes to flying gears that will follow Ethan from the beginning to the end of the level. In addition, players will need to also consider angles of ascent or descent from catapults and trampolines to get Ethan over some otherwise impassable obstacles, so there’s plenty of different challenges to work through. The part that falls to the ground however is that the controls are not always the best suited to the task. I would often find myself failing a task, assuming I needed to do it a different way, and failing at that, only to randomly succeed at my original strategy a couple of tries later thanks to the controls working properly this time around. This is frustrating, but thankfully well-placed respawn mitigates that frustration somewhat.

The interesting part of Ethan’s adventure is that he is not always running, jumping, and dodging obstacles and traps, sometimes he’ll need to stop and think of how you are going to be able to move forward. The powers granted to Ethan by the meteorite allow him to stop time and rearrange objects immediately around him. These abilities lend a depth to the game that would not be present otherwise and offer the primary weapons for overcoming the game’s puzzles and traps. Players only have a limited number of attempts with which to use the powers, but a simple trip back to the checkpoint resets this limit, making the whole mechanic largely redundant.

Ethan: Meteor Hunter is an interesting little game and a decent platformer with interesting concepts, however sometimes the unrefined controls can get in the way of being truly enjoyable.