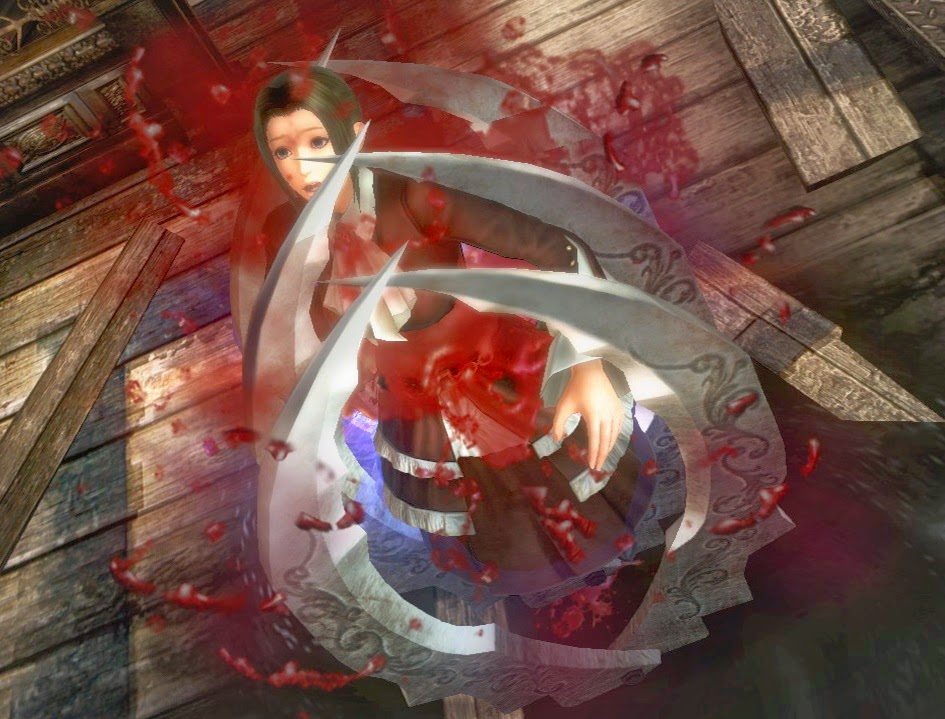 There is something deeply unpleasant, but darkly humorous about Deception IV. In a similar way that most good slasher and goreporn horror films have unpleasant content, but are less interested in being horrific as much as providing some darkly funny social commentary, Deception IV is a brutally violent game, filled with screams of torture and painted red in crimson… and I couldn’t stop giggling.

Before I get on to why I think this is quite possibly the most entertainingly different puzzle game ever created, there are some things that need to be addressed first. Firstly; as the opening paragraph suggested, if you haven’t got a certain tolerance for extreme violence and can’t stomach the idea of torture in your media, then Deception IV won’t sit well with you. The game’s core feature is its “traps,” and from bear traps to falling rocks, iron maidens and swinging blades these traps run the gauntlet of the most violent things one human being could subject another too. It’s essentially a game where the goal is to come up with the most brutal torture that a diseased mind can conceive. 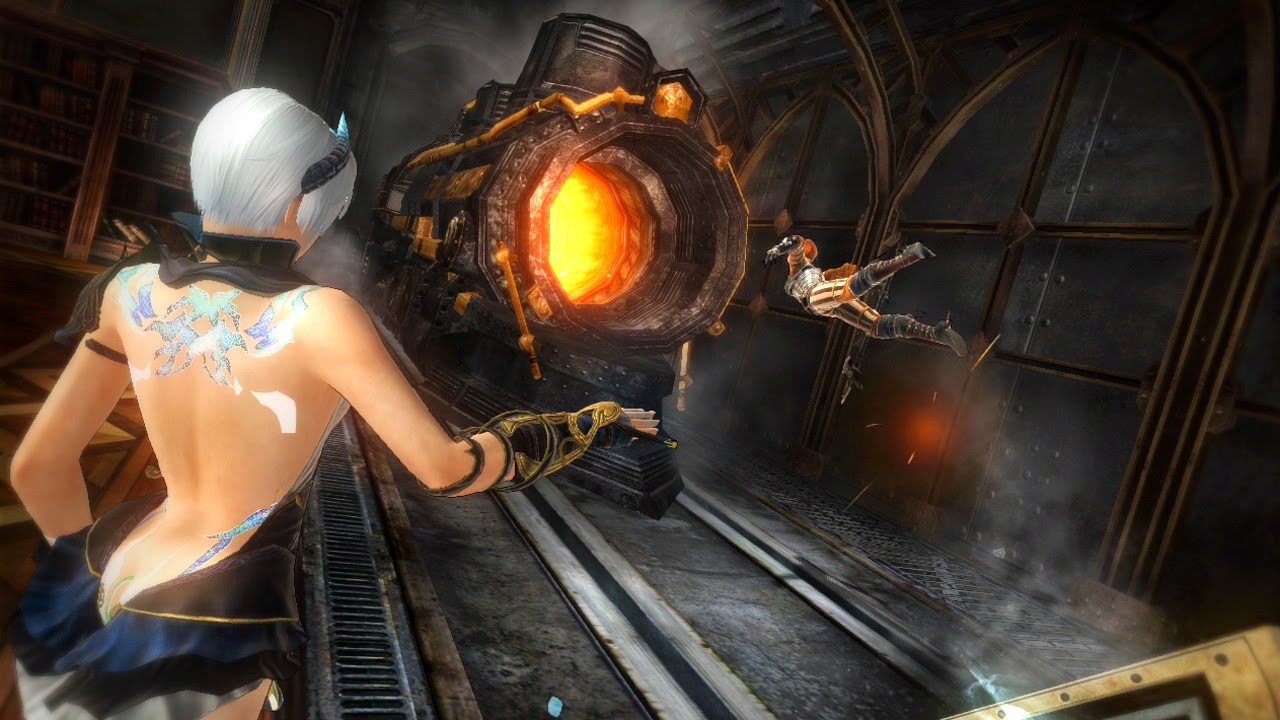 There’s also a hint of misogyny that will upset some, I suspect. The four main characters are all female, and all allied to the devil himself. Three of these characters are demons that assist the anti-hero protagonist (and daughter of the devil), Laegrinna, as she slaughters all that come near her. All of these women are presented as succubi; under-dressed and seductive, the way they commit their killings is by luring enemies into traps by their mere presence. A central gameplay mechanic is that the enemies will nearly universally move towards Laegrinna as moths to a flame. All of this is complimented by plenty of dialogue that draws specific attention to Laegrinna as a woman; she’s a clear play on the femme fatale role within dark narratives, in other words, and this character type has long been criticised amongst academic circles as being essentially misogynist.

With all of this said, I would argue that Deception IV is far too self referential for any of this unpleasantness for it to stick as genuine. It’s the kind of transgressive self awareness that relegates the game to a kind of underground cult status; never fully understood by the mass community and unfairly maligned for being something that it’s not. With regards to the violence, the fact that the iron maidens are contrasted with traps such as banana peels (far more deadly than in Mario Kart, I can assure you), and vases that get comically stuck on an enemy’s head to obscure his or her vision, is a clear indication that the violence is, in context, darkly humorous. As your trap repertoire grows, it’s impossible to avoid laughing as an impossible and surreal sequence of nasty traps that include having a pumpkin land on an enemy’s head and then having a boulder rolling over them plays out before your eyes.

The characterisation is also tongue in cheek. Each enemy has a short bio that you can read before combat starts, and these bios are always written with the kind of biting satire that means that their deaths aren’t exactly something to mourn over. Because all the characters are reduced to caricatures and objects of satire, the femme fatale angle of Laegrinna and her allies reads more like hyperbole to draw attention to how female villains are all-too-often portrayed in games in general, than any real and genuine misogyny. 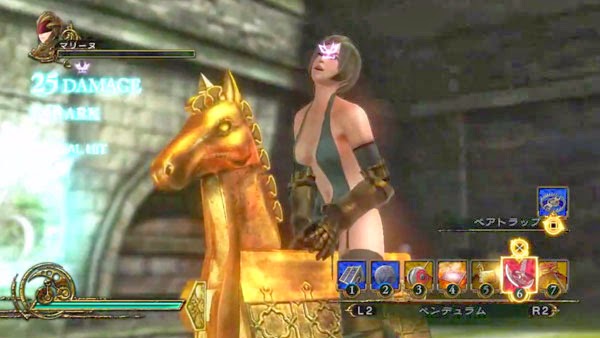 Deception’s narrative and environment, in other words, is a hyperviolence and dark, but ultimately comedic one that manages to spring surprises on players regularly enough to keep them interested. My only real criticism here is that perhaps the narrative is backgrounded a little too much, and by the end of the game I had started to see the entire experience as a puzzle game not unlike Tetris, rather than a fully-fledged and narrative-driven experience.

As a pure puzzle game, Deception holds up well enough. The basic idea here is to manipulate the environment by laying down traps to create elaborate chains of horror that wipe enemies out quickly and efficiently. At the start of the game you’ll only be able to place down three traps on the map from a selection of nine, but that repertoire quickly expands.

Good trap design works something like this; a bear claw traps an enemy in its place. Then a swinging blade will descend from the ceiling to do some massive damage and send the enemy flying… right to the point where a pumpkin will land on his/ her head, which confuses him/ her and sends them walking directly into the path of a giant statue, which animates and attacks them. By the time players are at the end of the game, they’re creating elaborate domino chains of doom, and it’s a fascinating kind of spatial puzzle solving action that, when executed perfectly, is so very satisfying. Throw in the ability to capture near-dead enemies by imprisoning them within cages, and an experience system that rewards players that come up with creative ways to deal extreme damage, and there’s a lot of room in Deception to get really good at the game. 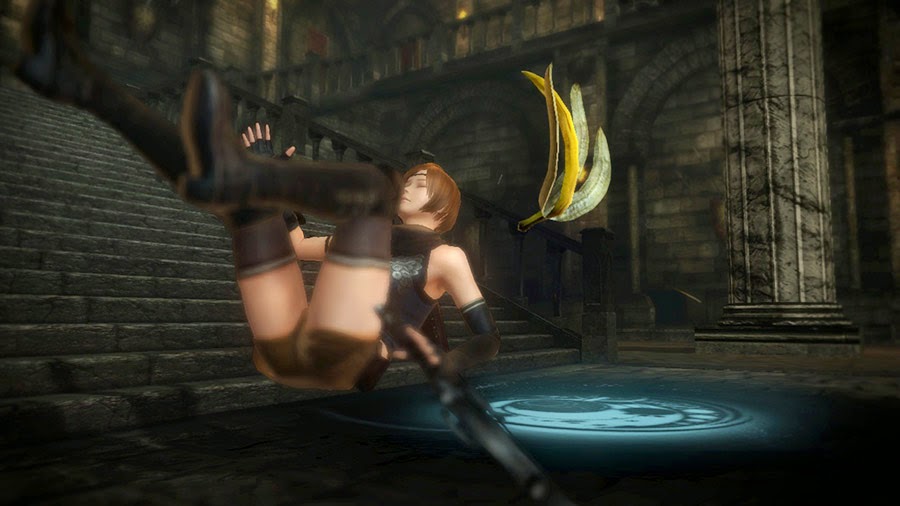 The game’s environments, where the combat plays out, is very limited indeed, but these rooms offer a wealth of variety in how players can approach problems. If there’s a staircase in a room you can roll a boulder down it to trap multiple enemies in the one go. Another room has an electric chair. Still others have animated statues. Players can be harmed by their own traps and the environment, and when there are multiple enemies to watch at once the action can get quite hectic. This is the only moment when the game reveals technical limitations, with the camera not always quite up to the task of juggling multiple priorities at once.

Playing well earns experience and currency to purchase a wider range of traps, opening up more strategic opportunities. Deception doesn’t stray far from its razor-sharp focus, but it achieves just enough to be addictive for long enough that it feels like a complete, full-length game.

Despite being limited in scope and the very definition of a cult game, Deception IV: Blood Ties is a darkly comic and entertaining game. More puzzle game than anything else, it’s perhaps not the action experience that some would go into it expecting, and nor can I guarantee its content won’t offend people, any more than I would recommend a film like Hostel to my grandmother or a friend for a first date, but assuming you can get past that, then this is a game that is genuinely unique, and twisted in just the right way.